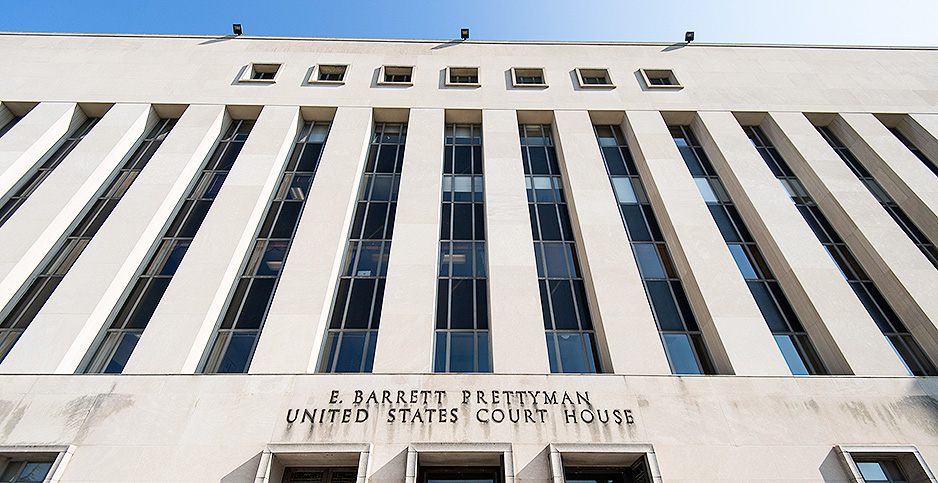 Though the judiciary branch had enough funds to survive the first several weeks of the shutdown, it expects to go broke late next week. Courts won’t shutter, but they’ll have to trim services and staff.

"If the courts are starting to run out of money and they have to then prioritize, then that complicates things even further," said Beveridge & Diamond PC attorney John Cruden, former head of the Justice Department’s environment division.

"We’re writing on a blank slate because this hasn’t happened before, and we will all be watching as the courts decide how to administer the shutdown requirements and comply with the Antideficiency Act," he added, referring to the law that governs federal spending.

High-stakes environmental lawsuits are left in the lurch.

"That’s the big game changer," Earthjustice attorney Kim Smaczniak said. "If the courts are not going to be fully staffed, we’re going to have to worry about what cases are moving forward in the absence of funds.

"That’s going to be a serious concern for our ability to get justice for the communities we represent."

Previous funding lapses haven’t lasted long enough to force major cutbacks in federal courts, so it’s unclear what level of operations they will maintain once funding dries up.

Criminal cases will move forward without interruption, but the latest status update from the Administrative Office of the U.S. Courts, which manages all federal courts, doesn’t go into detail on civil litigation. It simply directs each court to "determine the staff necessary to support its mission critical work."

Litigants are watching to see how individual courts respond, and they’re hopeful judges will keep cases on track as much as possible.

"But there is going to come a point where there’s going to be triage," Smaczniak said, "and I honestly don’t know that there is a system in place, because we haven’t experienced this for deciding what comes to the top."

After handling urgent requests for preliminary injunctions or restraining orders, courts might look to the reform act factors when prioritizing civil matters, he said.

Individual courts have begun to spell out their plans. The Richmond, Va.-based 4th U.S. Circuit Court of Appeals, for example, announced yesterday it will continue to put new lawsuits on the docket, decide motions, hear oral arguments and issue rulings.

Similarly, Chief Judge Robert Katzmann of the 2nd U.S. Circuit Court of Appeals in New York issued an order Wednesday clarifying that all employees in that circuit "are hereby deemed to be essential as part of or essential support for the exercise of judicial powers."

Some other courts have kept mum or simply reposted announcements from the Administrative Office without further guidance. Among them are the U.S. Court of Appeals for the District of Columbia Circuit and the 9th U.S. Circuit Court of Appeals, both of which carry heavy environmental caseloads.

"It looks like the courts will continue operating, maybe a little bit of a shoestring," Sierra Club legal director Patrick Gallagher said. "It’s kind of uncharted territory, and we’re not really clear what’s going to happen over the next few weeks."

With many Justice Department lawyers furloughed since the Dec. 22 lapse in appropriations, cases involving government agencies have largely stalled.

Most DOJ lawyers are authorized to work only when necessary to meet court orders, and they’ve requested extensions or litigation freezes in scores of cases. Judges have generally required oral arguments that are already on the calendar to move forward, and they’ve delayed deadlines for briefs and other filings on a case-by-case basis.

Environmental lawyers opposing the federal government in many of those cases have opposed some delays and gone along with others.

Many judges aren’t interested in indefinite delays either. A California district court judge rejected the federal government’s bid to delay deadlines in a case involving greenhouse gas emissions from landfills.

The D.C. Circuit likewise denied EPA’s request to freeze a challenge to the agency’s refusal to require stricter ozone standards for certain coal-fired power plants in West Virginia and Pennsylvania.

Court delays are especially problematic for environmental lawyers in cases involving government programs that are continuing during the shutdown.

"In any case where they’re continuing to do administrative work, whether that’s rulemaking work or permit work, if we’re aware that they’re doing that work, there’s no way in hell we’re going to give them more time," Gallagher said.

Courts have stepped in in some cases. In South Carolina, for example, a judge barred the Interior Department from taking any final action on pending applications for seismic testing to assess oil and gas reserves beneath the Atlantic Ocean (Greenwire, Jan. 18).

The Sierra Club and others are monitoring other executive branch work and might sue over how some agencies are using their limited funds. The group is looking into several activities it considers suspect: EPA acting chief Andrew Wheeler’s recent confirmation hearing and ongoing permitting for oil and gas development, to name a few.

A lawsuit would likely be filed under the Administrative Procedure Act and the Antideficiency Act, which generally limits shutdown spending to activities necessary to protect life and property.

"The Antideficiency Act is a pretty straightforward statute," Gallagher said. "The question is, who can enforce it? And there you get into some tricky issues of standing that we are still sorting through."

The Justice Department’s latest shutdown contingency plan says about 45 percent of the Environment and Natural Resources Division staff is excepted from furlough — mainly top officials and anyone needed to handle pending court deadlines.

The precise number is constantly in flux, with section leaders deciding on a rolling basis who needs to show up to file extension requests in litigation or handle cases that haven’t been put on ice.

"Basically then, if you didn’t get the extension, you were sort of the one person left in the office, or the handful of people left in the office who had to work," said Smaczniak, who worked at DOJ during previous shutdowns. "You got a lot of work done — pretty much plow through the thing you were required to do — you could work on that, but only that single matter."

Some of those matters are complicated by furloughs at EPA, the Interior Department and other agencies, making it difficult for DOJ to coordinate witnesses for trial or consult with other officials on court filings.

Empty desks and unattended email accounts at DOJ are also causing headaches that could snowball into more serious problems for litigants, depending on how long the shutdown continues.

Industry and environmental lawyers with settlements pending in cases they’ve won have been unable to negotiate terms under the Equal Access to Justice Act with their government counterparts. That’s a problem for groups like Earthjustice, the Western Environmental Law Center and others that represent clients for free.

"Together, we provide a fundamental check on federal management and decisionmaking of our public lands and resources, and without the timely ability to recover the fees and costs we have invested in these cases, our ability to continue this work on behalf of the public and ensure federal law is upheld is threatened," WELC attorney Kyle Tisdel said.

The law center is waiting to settle legal fees from its victory in a challenge to Interior’s climate analysis for oil and gas leasing in New Mexico. Negotiations have also stalled in a case WELC partially won last year involving leasing in Colorado.

"Our opposing parties are just MIA," Gallagher said. "There’s no EPA officials, there’s no DOI officials, we can’t get in touch with the U.S. attorneys. It’s a total drag."

Showalter said the litigation delays are inconvenient to industry, too — even in cases where they’d rather not see environmentalists’ arguments advance.

"Businesses need to plan and do things, and holding things in abeyance forever, it’s not like there’s Blackbeard the pirate trying to hoard a chest of money," he said. "It’s people inside of business or inside of a group who are just trying to do their jobs. They need to know whether to make a left turn or a right turn."

When the shutdown ends, government lawyers will have to catch up on mountains of work.

"It’s not like a light switch: The lights were off, then you turn them back on, and everything goes back to normal," said Cruden, the former DOJ official.

Instead, they’ll have to slowly address the routine issues unattended during the shutdown — filing new cases, reviewing agency questions, tracking litigation that might affect the federal government. Plus, they’ll have to meet all the new deadlines in delayed cases.

"All shutdowns create backlog," Cruden said. "When the government opens back up, and all employees return to work, they are then facing an avalanche of responsibilities, dealing with delayed work over the shutdown period and the new work just coming in. It’s extremely disruptive."