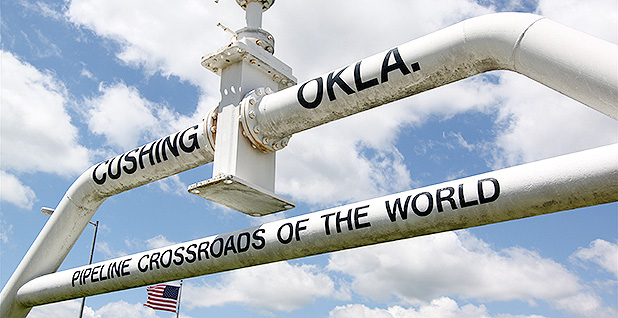 Oil prices plummeted yesterday as storage facilities like those in Cushing, Okla., began to near their capacity. Roy Luck/Flickr

Oil prices took a spectacular tumble yesterday with the benchmark U.S. grade falling into negative territory for the first time on fears the world will run out of storage during the novel coronavirus pandemic.

West Texas Intermediate crude, which sold for more than $60 a barrel at the beginning of the year, started the day at just under $18 a barrel and fell 300% to a low of around negative $37 per barrel. The plunge came amid an unprecedented drop in worldwide oil consumption due to widespread travel restrictions and business shutdowns aimed at curbing the spread of COVID-19.

The negative price — which roiled markets a week after the Trump administration and the world’s crude-producing countries negotiated a highly publicized deal to stabilize them — was likely a quirk of the oil market structure and will be short-lived, analysts said. But it shows that the pandemic’s economic effects will continue to hammer oil prices for months, if not longer.

"We ought to be a little bit humbled because we’re living in completely uncharted territory here," said Mark Finley, a fellow in energy and global oil at Rice University’s Baker Institute.

The free-falling price is another historic event, coming on the heels of the record-setting drop in oil demand that the virus caused and the international deal by oil-producing countries to slash production, Finley said.

Oil typically trades on one-month contracts, and the negative prices only affect oil scheduled for delivery in May. The price for West Texas Intermediate delivered in June is still about $22 a barrel.

The sharp drop shows the larger problem with the oil market, according to the data firm Rystad Energy. Demand for crude has fallen by more than one-fourth since the outbreak started, yet production has continued at a breakneck pace because of a price war among Saudi Arabia, Russia and other oil-pumping nations.

It was only a matter of time before the supply of oil outstripped the demand from refineries and the capacity of storage facilities to hold it.

"And what does that mean? That pricey shut-ins or even bankruptcies could now be cheaper for some operators," the firm’s oil market analyst, Louise Dickson, said in a research note.

OPEC announced April 12 that its members and Russia will cut production by 9.7 million barrels a day, but the cuts don’t take effect until May 1 and they may not be large enough to offset the drop in demand (Energywire, April 12).

Last week, the U.S. Energy Information Administration warned that the oil storage complex in Cushing, Okla., was nearing its capacity. Cushing is the delivery point for oil traded on the New York Mercantile Exchange, so some of the price drop was likely due to traders who couldn’t take delivery of crude they had contracted to buy in May.

Still, the impact was being felt across the oil industry.

Halliburton Corp., one of the largest providers of fracking equipment to the shale industry, said yesterday it would cut its overhead by $1 billion after seeing its revenue fall during the first three months of the year.

Halliburton and its rival Schlumberger Ltd. have both announced thousands of layoffs as oil producers cut back their operations. Schlumberger said North American drilling activity could fall by as much as 60% in the second quarter of this year (Energywire, April 20).

President Trump personally negotiated with Russia and Saudi Arabia ahead of the OPEC agreement, an unprecedented move for an American president.

Trump downplayed the price drop yesterday, telling reporters at the White House it was due to "short sellers" in the financial markets and suggested prices will climb back.

He rejected a suggestion that Saudi Arabia or other countries should cut back production further.

Asked if he expected to take more steps, he said, "They’ve got to do more by the market."

Trump said the administration would be looking to fill a 75-million-barrel gap by filling the Strategic Petroleum Reserve.

"We’d get it for the right price," he noted.

He said the oil could either be purchased by the government or producers will store it.

"If we could buy it for nothing, we’re going to take everything we can get," he said, adding that the White House hopes Congress will give it the money for purchases. "One way or another, it will be full."

In Congress, several lawmakers from oil-producing states are working on plans to prop up the U.S. oil industry (Greenwire, April 20).

"Today’s collapse poses a devastating threat to our oil and gas sector, with job losses in the thousands and national security being weakened if the industry cannot recover," Cramer said on Twitter. "The dramatic low underscores why we cannot allow Saudi Arabia to flood the market, especially given our storage capacity dwindling."

Rep. Lizzie Fletcher (D-Texas) said she’ll introduce legislation appropriating money for the Department of Energy to buy oil on the open market and store it in the Strategic Petroleum Reserve.

"While this is a smart and important effort, it will not solve the underlying demand problem," Fletcher said in a statement. "We must recognize that this price drop is a direct result of decreased demand because of the COVID-19 pandemic, and we must do all we can to combat this virus at home and around the world."

At the state level, the Railroad Commission of Texas is scheduled to vote today on a proposal to impose mandatory production quotas on Texas’ oil industry, something the regulatory agency hasn’t done since the 1970s.

In Oklahoma, the state Corporation Commission will consider a similar request next month.

U.S. leaders may expect prices to stabilize more quickly than they will, considering the OPEC deal, said Marianne Kah, a senior research scholar at Columbia University’s Center on Global Energy Policy and a former chief economist at ConocoPhillips.

"I worry about what they may do, not understanding the market," she said of the Trump administration and some Republican congressmen. "Feeling like they instituted this great agreement, [they are] probably going to be impatient and angry."

The only thing truly shocking about the price plunge is how much demand for oil disappeared all at once. The rest is predictable, and it was anticipated, she said.

"I haven’t driven my car in three weeks," she said. "That is the part of it that is unprecedented. Everything that happens after that makes sense. It’s a terrible thing, but it makes sense."

The "good news" is that the new WTI contract for oil delivered in June is trading at over $21, "still well into positive territory," said Ehud Ronn, a finance professor and co-director of the Energy Management and Innovation Center at the University of Texas, Austin.

The wild card is how long the world’s economy stays subdued because of the virus, said Ryan Kellogg, a professor at the University of Chicago’s Harris School of Public Policy. The longer the pandemic lasts, the more likely it is that oil producers will see their skilled workforce move to other jobs and their stored equipment start to deteriorate, making it harder to restart production.

"The big question for the industry is going to be, ‘How long does it last?’" he said.