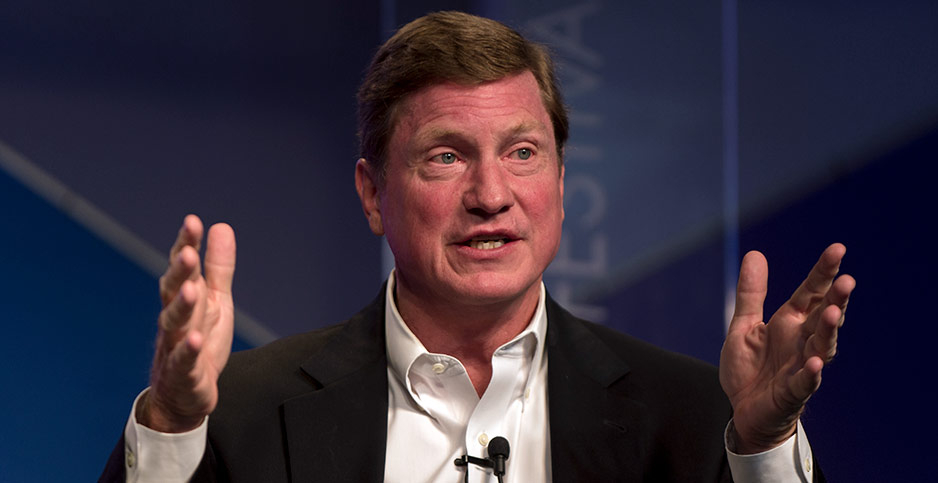 American Electric Power Co. and Southern Co. will not renew their membership in the American Coalition for Clean Coal Electricity next year, leaving the prominent trade association without any utility members.

The announcement from two of America’s top burners of coal followed questions from E&E News about the utilities’ continued membership in ACCCE, which has promoted a federal bailout for struggling coal plants and cheered the rollback of the Clean Power Plan, even as AEP and Southern announced plans to shut down coal plants and reduce carbon dioxide emissions.

"It was something that was convenient for them when there wasn’t any scrutiny, but as soon as they face real questions about their membership in a coal lobbying group they know it can’t be justified," said Joe Smyth, a researcher who has written about the pair’s lobbying efforts at the Energy and Policy Institute, a watchdog that supports renewables.

AEP and Southern long have ranked among the country’s top coal burners and CO2 emitters. In previous decades, both funded front groups that promoted climate denial and supported trade associations opposed to curbing CO2 emissions. But the pair has changed course in recent years, closing coal plants and unveiling plans to slash emissions.

Whether the companies have truly ditched coal and embraced carbon reductions, however, has been a topic of fierce debate in climate circles.

The electric behemoths have committed to running their largest carbon-emitting coal plants well into the 2030s and 2040s, even as they closed their smaller units (Climatewire, Aug. 23).

In Alabama, Southern has proposed replacing much of its old coal capacity with natural gas (Energywire, Sept. 9). AEP backed legislation in Ohio this year to bail out a pair of struggling coal plants (Energywire, July 24). And both power companies have supported trade associations opposed to climate policy and dedicated to promoting the use of coal and natural gas.

AEP and Southern’s membership in ACCCE emerged as an important test of their climate commitment against that backdrop.

ACCCE is a coalition of mining companies, railroads and power companies dedicated to promoting coal use. It was born out of the merger of several lobbying groups in 2008, just as efforts to promote cap-and-trade legislation were gaining momentum on Capitol Hill.

The organization has emerged as a particularly powerful player during the Trump administration.

Its representatives have met frequently with top officials at the Energy Department and EPA while cheering the administration’s efforts to revive the coal industry. ACCCE has backed the administration’s rollback of emission standards for carbon, limits on wastewater pollution and rules meant to improve the safety of coal ash disposal.

In a statement, a Southern spokesman said the utility’s ACCCE membership had lapsed and added, "We do not plan on a renewal." He did not elaborate.

An AEP spokeswoman said the Columbus, Ohio-based firm’s participation in ACCCE would end after this year.

"We review our memberships and lobbying activities routinely to ensure they align with our business strategy and serve the best interests of all stakeholders. We have decided to discontinue our membership in ACCCE after this year," Melissa McHenry, an AEP spokeswoman, wrote in an email.

AEP and Southern were the only investor-owned utilities to remain in ACCCE, but the group still counts power cooperatives like the Big Rivers Electric Corp., Buckeye Power Inc. and Oglethorpe Power Corp. among its members.

Their exit nonetheless speaks to utilities’ wider shift away from coal — operationally and politically. AEP and Southern’s decision to leave ACCCE follows a power company exodus from the Utility Air Regulatory Group earlier this year, when a Politico investigation revealed how utilities had bankrolled the group’s efforts to fight climate policy in court. Southern and AEP paid the group $663,453 and $555,395 in 2017, respectively, Politico found. UARG later announced plans to disband (Greenwire, May 13).

ACCCE, for its part, has been hammered by the coal industry’s decline. Its budget in 2017 was about $5.7 million, according to the coalition’s IRS filings, down from almost $9 million in 2015. In 2009, the Center for Public Integrity reported ACCCE had an annual budget of $45 million. More recently, ACCCE has seen prominent backers like Murray Energy Corp., a private coal company whose CEO is close with President Trump, declare bankruptcy.

ACCCE President and CEO Michelle Bloodworth said the organization appreciated AEP and Southern’s years of membership and hoped to work with them again in the future. The group remains committed to working with policymakers to maintain U.S. coal plants, she said.

"While the owners of the U.S. coal fleet are under pressure to continue to seek ways to lower their carbon emissions, we also know that coal is expected to remain an important source of electricity for decades to come," she wrote in an email.

AEP and Southern’s departure comes amid sustained pressure from investors, consumers and activists for power companies to align their lobbying efforts with commitments to reduce emissions. In February, a coalition of investors with $1.8 trillion in assets under management called on America’s 20 largest utilities to publicly commit to net-zero emissions by 2050. As part of that campaign, the group pushed companies not only to detail how they plan to overhaul their operations but to outline their lobbying efforts.

"We thought it was important to incorporate policy influence to demonstrate that these commitments were real," said Lisa Lindsley, director of investor engagement at Majority Action, a nonprofit that spearheaded the campaign. "We’ve had a bunch of dialogue, including with Southern, and there is a lot of telling investors one thing and doing another."

The increased scrutiny of AEP and Southern’s lobbying activity hints at a wider debate in the climate community: whether power companies can be trusted to deliver the emission reductions that scientists say are needed to avoid the worst consequences of a warming planet.

There’s a strong business case for utilities to green their operations going forward. Not only are renewables like wind and solar increasingly cost competitive with fossil fuels, but the electrification of the transportation and building sectors presents a major opportunity for utilities to grow their business.

"If utilities start to think that way, they can be interested in providing electricity but not be tied to the source of that energy," said Leah Stokes, a professor at the University of California, Santa Barbara, who studies power companies’ climate policies. "I think a lot of utilities are paying lip service to the idea but not doing a lot to back it up."

The large coal fleets of AEP and Southern were frequently ranked among the top CO2 emitters in the country. In 2015, AEP was the top carbon emitter followed by Southern in third, according to a tally by M.J. Bradley & Associates, a consulting firm. Two years later, after a series of plant closures and sales, Southern ranked second and AEP was fifth.

The pair’s past penchant for coal once informed their politics. Both utilities were founding members of the Global Climate Coalition, which promoted climate denial throughout the 1990s, according to documents obtained by the Climate Investigations Center. Southern funded Wei-Hock Soon, a prominent climate denier, as recently as 2015. Two years later, Southern CEO Tom Fanning told CNBC that a definitive link between human activities and climate change had yet to be proven.

Southern, which is headquartered in Atlanta and serves electric customers in three states in the South, pledged last year that its plants would emit "low to no" carbon by 2050. It has also tied Fanning’s compensation to emission reductions.

"Southern Company recognizes the importance of climate change and is a leader in advancing low- to no-carbon solutions that provide clean, safe, reliable and affordable energy to our customers and communities," Schuyler Baehman, a Southern spokesman, wrote in an email. "Our strategy to achieve these goals includes the continued development and deployment of a diverse portfolio of energy resources to reliably and affordably serve our customers and communities with a focus on reducing CO2 emissions."

AEP strengthened its carbon commitments this summer, with a plan to cut emissions 70% of 2000 levels by 2030 and 80% by 2050. It is planning to more than double its renewable portfolio in the next decade, adding 8.6 gigawatts of wind and solar to its existing renewable fleet of 5.3 GW, McHenry said.

She argued the company’s membership in large trade associations does not detract from AEP’s commitment to reducing emissions, writing: "[W]e participate in organizations with diverse interests and positions, some that we may agree with and some that we do not. Being part of the dialogue is important, whether we are in total agreement on all sides of an issue or not."

"Cap-and-trade is preferable because it provides the greatest environmental integrity, transparency, and regulatory certainty and can achieve significant emission reductions in the most cost effective ways," McHenry said. "The GHG reduction levels that can be achieved by a carbon tax are uncertain."

Doubts about the pair’s commitments nevertheless linger. AEP contributed $600,000 to the U.S. Chamber of Commerce last year, while Southern chipped in $337,500. The Chamber fought the Clean Power Plan and championed the Trump administration’s deregulatory agenda.

Both utilities are also members of the National Association of Manufacturers, which has long opposed federal climate polices and filed briefs in support of Exxon Mobil Corp. in its legal battles over climate change. AEP gave NAM $36,404 last year while Southern contributed $29,961.

"Corporate image counts a lot for your stock price and it counts a lot if you’re going to get regulated," said Robert Brulle, a researcher at Brown University who has studied utilities’ opposition to climate policy. "What we’ve learned about corporate imaging is they will try to promote themselves as a good corporate citizen while they let their trade associations do the dirty work."

Fred Palmer, a former coal executive who has long promoted the view that utilities’ carbon dioxide emissions were beneficial to life on Earth, said he has noticed a shift in utilities’ climate attitude.

AEP and Southern approached Palmer in the 1990s to form a group known as Informed Citizens for the Environment, he said. ICE, as it was known, questioned the overwhelming scientific consensus that CO2 presented a threat to the planet. Today, few utilities question climate science.

The shift reflects the new signals that society is sending to the power sector, Palmer said. Tax credits for wind and solar have steered them toward renewables while the Supreme Court’s finding in Massachusetts v. EPA — that CO2 presented a public health threat — has driven them away from coal.

He said he had no doubt utilities intended to keep their carbon commitments.