Under Trump, everybody wants a trade wall 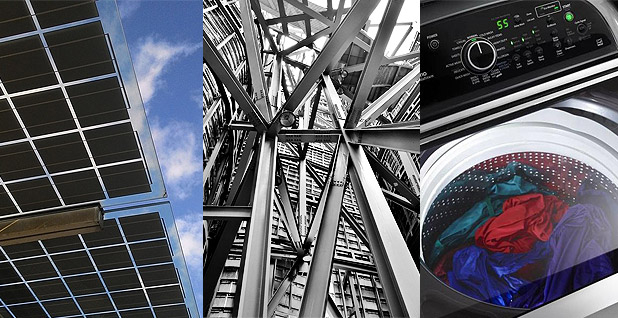 One of the most potent tools for shutting America’s markets to foreign competition is a little-known law called Section 201. Like a weapon of mass destruction, it sat dormant in America’s trade arsenal for the last 16 years.

Then, in April, a solar company pushed the red button.

That manufacturer, Suniva Inc., calculated that President Trump would be true to his rhetoric and raise trade walls to protect American manufacturing and jobs. But it is not alone. Ever since Trump’s presidential campaign swung into high gear last year, a flood of U.S. businesses have petitioned the government to penalize foreign products at the border and improve their own prospects.

"Everyone’s like, wow, let’s evaluate. Are there options out there we haven’t looked at that we should?" said Deanna Tanner Okun, a former chairwoman of the U.S. International Trade Commission (ITC) who is now representing Whirlpool Corp. in a petition to protect American washing machines.

"There is a lot going on in trade generally, because of the administration in the primary and since the president took office, that indicates they are willing to look at whatever trade tools are out there and encouraging trade action," she added.

Some of those actions the Trump administration might take up on its own, such as Section 232, which raises trade barriers in the interest of national security. Commerce Secretary Wilbur Ross is considering that weapon to protect American aluminum, semiconductors and especially steel, where an announcement of tariffs could come any day.

Meanwhile, businesses are asking for trade protection at levels they haven’t in years.

A common pair of trade remedies, called anti-dumping or countervailing-duty cases, can result in tariffs on foreign businesses or governments that undercut market prices in the U.S. and sap American industry. Last year, such petitions from businesses reached a 15-year high, and this year, "the agency is on pace to equal or surpass last year’s record," ITC spokeswoman Margaret O’Laughlin said in an email.

Trade actions are afoot against competing products around the globe: cylindrical bearings from South Korea, softwood lumber from Canada, ripe olives from Spain. "It’s getting a little hectic out there," said Giacomo Santangelo, a professor of economics at New York’s Fordham University who follows trade law.

The Trump administration has responded to this wave by proposing a 1.7 percent cut to the $89.2 million budget at the ITC, which handles most of the petitions.

No one knows exactly why so many trade cases are being filed at the same time. But trade lawyers and experts said it is probably because Trump has stirred nationalistic passions — or for businesses, a sense that it’s time to pounce.

"We must protect our borders from the ravages of other countries making our products, stealing our companies and destroying our jobs," Trump said in his inaugural address in January. "Protection will lead to great prosperity and strength."

Amid all this activity, one of the most unusual and controversial complaints is the one brought by solar firm Suniva under Section 201.

In April, Suniva, one of America’s last surviving manufacturers of photovoltaic cells and modules, declared bankruptcy and shut down its factories in Georgia and Michigan. A week later, it filed its petition with the ITC. Most companies seeking protection are solvent firms that merely want the government to fend off competition.

But for Suniva it has become an issue of life or death, since the backers who have committed to bankrolling its climb out of bankruptcy will do so only if Suniva wins the case (Energywire, May 8).

The trade case has sparked a furious backlash in the rest of the solar industry. Solar power is now as cheap as natural gas across much of the country, enabled by solar imports that get cheaper every year. Many in the solar business, which employs 260,000 people, fear that tariffs will send it into a nosedive.

The proviso that Suniva invoked, Section 201 in the Trade Act of 1974, basically hands the president the ability to protect a distressed American industry even if there isn’t proof that competing nations are breaking the rules. In this case, it would allow Trump to slap penalties on the most common kind of solar cells and modules from all countries and to set them at any level he wants. The decision will most likely go to his desk by November.

Suniva may have only been the first in a new wave of Section 201s, which are also called "global safeguard" actions because they raise trade walls against the world.

The two cases are similar: Both industries a few years ago successfully won tariffs to prevent Chinese companies from dumping. Both accuse China of evading that barrier by moving manufacturing to other Asian countries with cheap labor, like Vietnam and Thailand.

The difference is that while Whirlpool is a diverse public company that trades at $188 on the New York Stock Exchange, the petitioning solar manufacturers are small players that are on their last legs. Suniva declared bankruptcy in April, and its fellow petitioner, SolarWorld of Oregon, told its employees last month that mass layoffs might be coming.

Section 201 used to be a frequent tool of American trade. Between when the law was enacted in 1974 and the end of the Carter administration in 1981, industry asked the government for global protection 44 times. Section 201 continued to pop up regularly through the end of the 1990s.

But the last case brought, in 2001, was the most important. The steel industry asked President George W. Bush to raise worldwide tariffs, and the way it played out could hold lessons for how the tariff issue unfolds for Trump.

From steel to solar

In March 2002, Bush levied stiff duties on imported steel — an unusual move for a president who generally favored lowering trade barriers through free trade. Steel-producing countries around the world appealed to the World Trade Organization, which said it would slap more than $2 billion in fines on U.S. exporters unless the tariffs were lifted. When Bush said he wouldn’t abide by the ruling, the European Union threatened tariffs on Florida oranges and cars from Michigan — states that Bush would need to win in the next year’s election.

Bush dropped the tariffs in December 2003.

If new tariffs clash with the WTO, the task of resolving it will fall to Trump’s U.S. trade representative, Robert Lighthizer, who used to argue trade cases before the ITC and is known to dislike WTO’s process for resolving trade disputes.

"That has given a green light, or maybe a yellow light, to individuals who think, ‘A global safeguard action is a better move for me,’" said Okun, the former chairwoman of the ITC.

While trade cases are often about protecting threatened American jobs, they are leading to a windfall for one particular kind of worker: trade lawyers.

"I have heard from many sources that the trade bar as a whole is currently drinking from a fire hose," said Lawrence Friedman, a trade attorney and president of the Customs and International Trade Bar Association. "The unusual 232 cases on steel and aluminum and the 201 case on solar are not exactly unicorns, but rare enough that the trade bar is dusting off skills it has not exercised in a while."