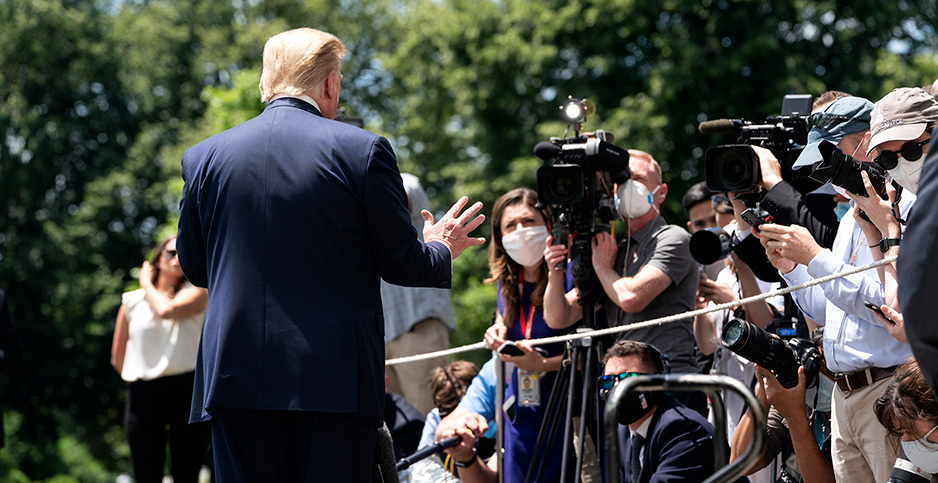 President Trump speaks to reporters on the South Lawn of the White House in this May 30 photo. Joyce N. Boghosian/White House/Flickr

The new executive order seeks to counteract the economic slump induced by the coronavirus pandemic by circumventing analysis under key environmental laws with the goal of moving more quickly on projects like highways and pipelines (Greenwire, June 4).

The order adds to a long list of efforts by the Trump administration to promote energy projects.

"As far as the legality," he continued, "there is a real question as to whether or not the president can contradict the directives of Congress and essentially suspend environmental laws that are in effect."

Both the order itself and any resulting agency project approvals are poised to be targets for legal challenges. Lawsuits that directly target agency actions may have a better chance at success, energy lawyers and environmental groups said.

The emergency authorities included in the environmental laws the order cites might apply to the initial response to the current public health crisis, said Elizabeth Klein, deputy director of the State Energy & Environmental Impact Center at New York University School of Law.

"But … this is not the kind of emergency that was contemplated with those authorities," she said. "The very idea that those projects should forgo NEPA review or ESA review or Clean Water Act review in the name of economic recovery is absurd and unnecessary."

‘Can’t have it both ways’

The people most likely to be affected by expedited federal projects are already more likely to experience poorer air and water quality, Klein said.

They are also more likely to be shut out of the environmental review process, she added.

"The way [the Trump administration is] going about it will actually create more harm to those very same communities," Klein said.

Another weakness of the order is that it references the spread of COVID-19 as a national emergency, but it does not say that the economic condition of the country is part of that, said Brett Hartl, government affairs director at the Center for Biological Diversity.

He noted that at the same time Trump is claiming projects must seek expedited approvals, the president is also arguing that the country is ready to reopen. The order highlights the need for continued progress to streamline projects, made "all the more acute" by the current economic crisis.

"If you read it carefully, it says the emergency is causing economic distress, which it clearly is doing, but the emergency is not the economy. It’s the pandemic," Hartl said. "And Trump can’t have it both ways.

He noted that the federal agencies Trump tapped to list projects that could be fast-tracked — the Army Corps of Engineers and the Interior, Transportation, Agriculture and Defense departments — have only tangential responsibilities to address the pandemic.

"The chain of reasoning by his own executive order is very faulty," Hartl said.

Legal challengers of Trump’s order may face hurdles in their efforts to demonstrate direct injury from the directive, a key component of establishing standing before a court.

But, Klein said, litigants could overcome that challenge by pointing to the order’s "fundamental lack of transparency."

The Center for Biological Diversity yesterday sent a Freedom of Information Act request to federal agencies seeking information on how they are responding to the order. Each agency has 30 days to come up with a list of projects, which does not have to be publicized.

"We think we will be successful once we see the type of damage it’s doing," Hartl said of potential lawsuits challenging project approvals that result from Trump’s order.

But claims that the order would allow agencies to evade environmental review are "incorrect," Bracewell LLP partner Ann Navaro said in an email, noting that agency-specific emergency procedures are well established.

"Many agencies have their own long-standing NEPA procedures for emergencies," she said. "Generally, this involves expedited analysis and coordination before taking action and then more extensive analysis and, where appropriate, mitigation after the action is taken."

She said the executive order itself may be difficult to challenge directly in court, though specific projects could potentially face lawsuits.

"I expect that if agencies use their emergency procedures based on the guidance in the new EO to approve permit applications or projects, opponents may sue to challenge those specific agency decisions and argue that the fact-specific circumstances do not allow the agency the discretion to rely on the emergency process," Navaro said.

Outside the courtroom, some experts are unsure just how broad an impact the executive order will have.

He said he’s not convinced the order will accomplish much.

"A tweet or a phone call would have had the same effect as a formal executive order," Farber wrote.

The 2020 election is also likely to affect the order’s impact, said Samir Abdelnour, a partner at the law firm Hanson Bridgett LLP.

"Who knows what happens in November," he said. "It’s really hard to predict how long-lasting this effort will be, irrespective of the outcome of litigation around it."