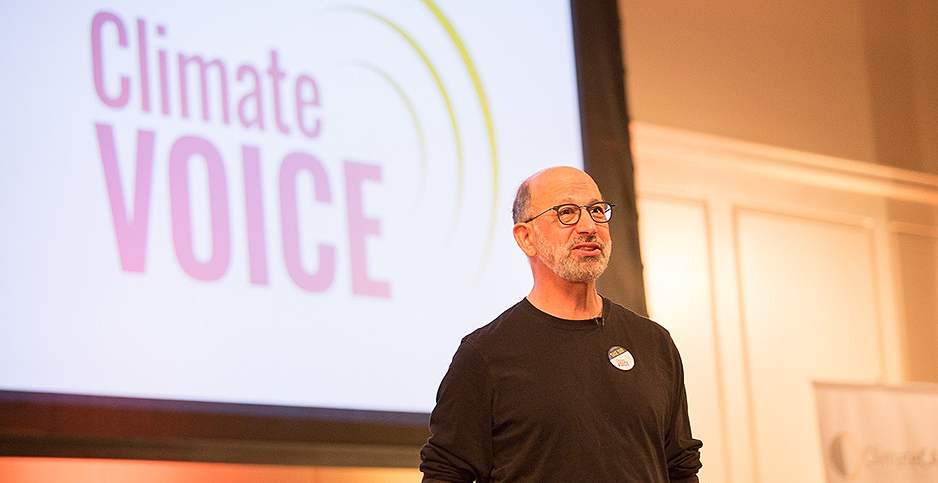 After more than a decade as one of Silicon Valley’s top sustainability executives, Bill Weihl had grown frustrated by the powerful technology industry’s reluctance to push for strong climate policies.

So he quit his job as Facebook Inc.’s sustainability director in 2018 and began laying the groundwork for ClimateVoice.

Launched in February, the nonprofit seeks to work with tech giant employees and recruits who want to see businesses do more to protect the planet.

"I was completely convinced that the most important thing that companies could do was lend their influence to helping get real public policy on climate to happen, and I couldn’t see how to make that happen from the inside," said Weihl, who was Google’s first green energy czar. "I felt like I could have much more impact on that from the outside."

The 63-year-old’s gamble will be put to the test in the coming months, when President-elect Joe Biden takes office and seeks to implement the ambitious climate plan he touted on the campaign trail.

"We don’t have four years to slowly push through a series of modest climate measures," Weihl said from his San Francisco home. "So the next six to 12 months will be really critical for climate policy. We need companies to step up and meet the moment."

Biden will push for more protective climate policies "if there are companies really supporting and encouraging him to do more," said Weihl, whom Time magazine called one of its "heroes of the environment" in 2009.

With a doctorate in computer science and experience as a Massachusetts Institute of Technology professor and software engineer, Weihl makes for an unusual environmental activist. But he believes that background made it possible for him to quickly grasp the threat posed by climate change when he began learning about the problem in the late 1990s.

"I grew up intellectually in a field that was all about exponential growth," Weihl said. "So all the nonlinear projections of what could happen with the climate as emissions rose, I kind of understood in a way that I think most people [didn’t]."

Initially, Weihl sought to address his climate concerns at home. He and his wife purchased a Toyota Prius in 2001, four years after the pioneering hybrid vehicle first went on sale in the United States, and put solar on their rooftop in 2006.

When former oilman George W. Bush won a second term as president, Weihl felt the need to do more.

"If I was thinking about something other than family or friends or so on, it was usually climate change," the father of two said of that period. "And I decided that I wanted to see if I could do something professional about it."

With the support of his wife — a nurse practitioner and former public policy researcher who’d changed careers before him — Weihl left his job as chief technology officer of Akamai Technologies a month after the presidential election.

Over the next year, he began pitching himself as a science, engineering and business expert who was passionate about fighting climate change — and a quick study. At Google, which had only gone public in 2004, he found a receptive audience.

At Google, Weihl began measuring the company’s carbon footprint and creating strategies to reduce it. He invested in high-quality carbon offsets, began purchasing renewable energy for its power-hungry data centers and led an effort to drive innovation in renewable energy technology.

When Facebook promised environmental activists in 2012 that it would stop powering its data centers with coal, the social media giant hired Weihl to help it figure out how to make that happen.

Activists who’d previously fought Facebook found Weihl to be an ally on the inside.

"He was definitely looking at, how can someone in a tech company be a positive catalyst, and was often constrained by what the company was willing to do," said Gary Cook, who worked on Greenpeace’s "Unfriend Coal" effort and is now a senior campaigner at Stand.earth. "He was always trying to think about, how do I push the envelope?"

Cook said Weihl "wasn’t the one I needed to convince. You had to convince people elsewhere in the building that they needed to move, to have bigger ambition."

At both Facebook and Google, Weihl said, he had broad support for cleaning up their internal operations. It was when he pushed leadership to back efforts that would affect the broader grid or climate policy debate that Weihl says he ran into resistance.

"If I’d been able to get Facebook to really step up as an advocate for [climate-friendly] public policy, I would have stayed much longer," he said.

But in a statement, Facebook defended its environmental engagement.

"We’re committed to fighting climate change and are taking substantive steps to address this important issue," a company spokesperson said. "We’re implementing the Paris Climate Agreement emissions targets across our operations, helped found the Renewable Energy Buyers Alliance to increase access to renewable energy and are minimizing our own environmental impact, while working with partners on solutions for a more sustainable world."

The fight for lesbian, gay, bisexual and transgender rights at the end of the Obama administration was an inspiration for Weihl. He watched as hundreds of companies, which long had internal policies protecting the rights and benefits of their LGBT employees, began to publicly oppose legislation that conflicted with their corporate values.

Facebook in particular became involved with the fight for LGBT rights when North Carolina, where it has a major data center, enacted a bill that barred transgender people from using bathrooms in state buildings that match their gender identity.

"A number of LGBT employees basically stood up internally and said the company needs to go to the mat on this," he recalled. "And a bunch of others of us who were allies stood up and said we agree."

In the end, he said, "Facebook and a whole bunch of other companies told North Carolina, ‘You need to fix this, or we’re going to have to reconsider our presence in the state.’ And they fixed it."

Weihl is now seeking to replicate that kind of worker-led corporate action in the climate space.

"What moved the companies to get off the sidelines in these public policy debates was employee sentiment and I think the fear that, if the company stays silent, that there would be a campaign by these outside groups that would paint the companies as complicit. And that would make them look really bad in the eyes of college students, who are the people they want to hire," Weihl said of the gay rights battles. "So that was the inspiration for the model that we’re building with ClimateVoice."

Weihl has been thinking about making the leap into advocacy for several years, according to Gail Greenwald, a clean tech investor. She has served alongside him on the boards of the Sierra Club Foundation, the environmental group’s charitable arm, and WeSpire, a company that helps businesses make a positive impact in their communities.

"It was the subject of many conversations over drinks while we were waiting for dinner after the board meetings and out on the trail," said Greenwald, who noted that Weihl is an avid hiker. He has the personal experience of being at Facebook and "seeing how kind of slow and resistant companies were to really get into the policy advocacy arena."

Weihl’s career trajectory — from academia to the boardroom to the protest rally — might not make much sense on paper. But it does to those who know him.

"Friends at a couple of different jobs have described me as a shit stirrer," Weihl said. "It’s probably accurate. And I think I’ve learned to do that, mostly tactfully, in a way that can influence people and drive useful change."

At this point, ClimateVoice is a shoestring operation. Weihl says he has assembled a team of roughly 25 volunteers and staffers, some of whom are working part time. ClimateVoice has secured funding from grant-making foundations, which he hopes will help him bring on more help and expand the group’s organizing efforts inside companies and on college campuses.

Nevertheless, the group has gotten nearly 1,000 employees from a broad range of businesses and sectors to commit to going "#AllinOnClimate." Signers of the ClimateVoice pledge vow to prioritize working for a company that strongly advocates "for pro-climate policies," to make it clear to companies that "climate matters to me" and to share the message "we have the power to activate our companies on climate."

ClimateVoice is also collaborating with employees at a half-dozen corporations on a campaign they plan to launch early next year "focused on getting companies to make climate policy one of their top lobbying priorities," Weihl said. "The big tech companies are still way too quiet."

Amazon.com Inc., for instance, currently pays 115 lobbyists to advocate on behalf of the company, which has vowed to become carbon neutral by 2040. But just one of its lobbyists has met with government officials about "issues related to sustainability," disclosure reports show.

And Facebook, Weihl’s former employer, only began talking to members of Congress about climate change in the last few months (Climatewire, Nov. 16).

Amazon and Facebook are also members of the U.S. Chamber of Commerce, a powerful trade group that has long opposed action on climate change. The companies have defended their involvement with the Chamber by noting that they don’t agree with the group on every issue.

"That’s hypocrisy," Weihl said. "Silence is complicity, it’s not neutrality. And that’s part of what we’re trying to change with ClimateVoice."

Weihl’s team is working with a coalition of student climate groups on a campaign against the Chamber. They are targeting JPMorgan Chase & Co., IBM, Coca-Cola Co. and six other companies whose executives are on the Chamber’s board of directors.

At the same time, Weihl knows he has a tough road ahead, particularly given his previous ties to some of the corporations he is now pressuring to get off the sidelines of the climate fight.

"My goal here is not to make my buddies in these companies feel comfortable. My goal is to enlist them, to help them do what needs to be done to address the climate crisis," he said. "Until they start to see value in speaking up and risk when they stay silent, they’re going to continue to stay silent."