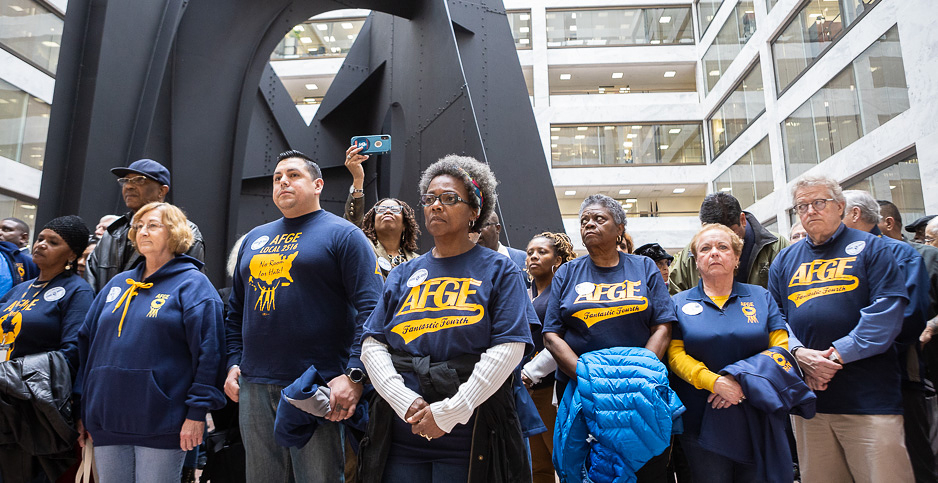 Workers affiliated with the American Federation of Government Employees at a silent protest on Capitol Hill on Feb. 11, 2020. Francis Chung/E&E News

EPA has turned back a number of President Trump-era measures that limited its largest employee union.

EPA and the American Federation of Government Employees have signed a memorandum of understanding as they get ready to relaunch contract talks.

The memo replaces provisions in a contract negotiated between the two that went into effect last summer with the relevant articles from the 2007 collective bargaining agreement AFGE had with EPA. The contract’s articles that have been changed include those dealing with "official time," or use of paid work hours for union activities; procedures for filing grievances; use of EPA facilities; and employee performance evaluations.

Union officials said they were pleased with the agreement.

"This interim agreement restores employees’ right to full representation at the worksite and will make it possible for employees through their union representatives to resolve any issues they encounter," Gary Morton, president of AFGE Council 238, which represents about 7,500 EPA employees, said in a statement. "This is a huge step in the right direction, and the union won’t stop fighting until we eliminate all of the anti-labor provisions forced on us by the previous administration."

AFGE Local 3631 President Marie Owens Powell, who represents EPA Region 3 employees, told E&E News, "The interim agreement with the agency is a start. There is still a lot of work to be done."

She added, "I remain cautiously optimistic."

An EPA spokesperson said the agreement includes "a commitment from both parties to return to the bargaining table to renegotiate the 2020 AFGE/EPA Collective Bargaining Agreement."

In addition, the deal rescinds provisions related to executive orders from the Trump administration and restores official time for representational duties, according to EPA.

EPA and AFGE signed off on the memo last Friday, and it went into effect today.

The memo also said some provisions from the 2020 contract remain unchanged for now, including on work schedules and telework, but will likely be bargained.

"The parties agree that telework and work schedules are appropriate subjects during term negotiations," the memo said.

The majority of EPA staff have been teleworking over the past year to avoid exposure to the COVID-19 virus. The union will likely push to keep those greater telework flexibilities after the pandemic ends.

"Consistently over the past year, the workforce at EPA has met or exceeded management’s expectations while teleworking full time. Maximum telework options will help the agency retain seasoned employees as well as attract excellent candidates for future employment," Powell said.

The EPA spokesperson said, "The agency is evaluating many of its policies that were issued over the past four years, including telework."

In addition, one measure related to employees’ performance improvement plans from the 2007 contract will not be in effect. Instead, "The Agency must have justification to place an employee on a PIP," the memo said.

Further, an article on fitness and wellness centers from the 2007 agreement will not be in effect.

The memo helps set the stage for future bargaining between EPA and AFGE.

Over the next two weeks, the agency and the union will review articles in the 2007 contract to see what no longer applies as they craft an interim agreement. Then, once that interim agreement is signed, EPA and AFGE will begin contract bargaining within 90 days.

The memo comes in response to President Biden’s executive order to have agencies reengage with their employees’ unions and subsequent guidance from the Office of Personnel Management. It’s a marked turn from the Trump administration, which had targeted federal worker unions and sought to limit official time and telework.

The crackdown on unions was particularly acute at EPA. Top leadership at the agency, including then-Administrator Andrew Wheeler, were the subject of unfair labor practice complaints.

Moreover, the agency imposed a contract in July 2019 on AFGE’s bargaining unit employees over the union’s protests that reduced telework, curbed the grievance process and forced union officials out of agency office space. By the following year, AFGE renegotiated that contract with EPA and was able to turn back some of those losses.

Now it seems the agency is looking to improve relations with its unions. EPA Administrator Michael Regan has said he wants to mend those ties.

"We’re taking a look at how we can reengage and strengthen our relationship with our unions here. It is a top priority," Regan said at his first all-hands meeting with EPA staff last month (Greenwire, March 24).

"The workforce at EPA suffered tremendously during the Trump administration," Powell said. "I hope negotiating a new contract will provide protections necessary for bargaining unit employees to perform their duties while using sound science in decisionmaking."