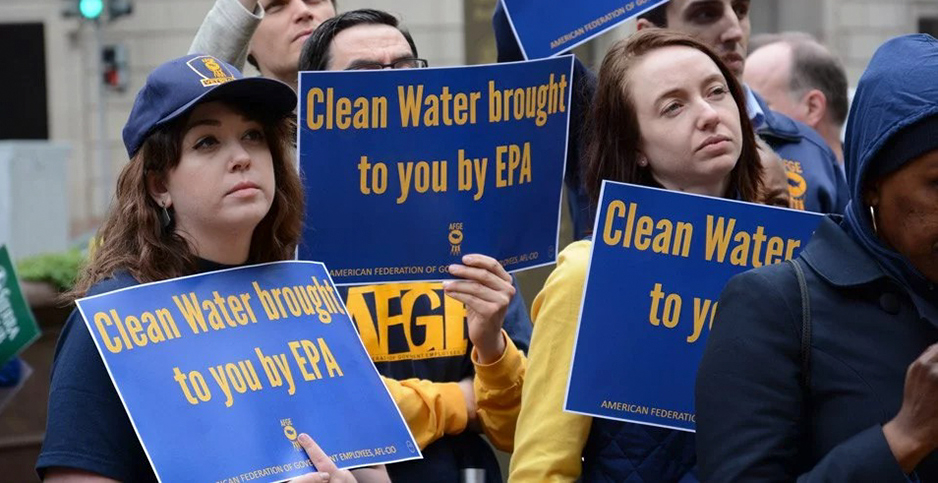 EPA is planning to impose a new employee contract for the agency’s largest union despite protests from the labor group.

In an email to local union leaders last night, Gary Morton, president of the American Federation of Government Employees Council 238, said EPA management plans to implement a "unilaterally imposed anti employee contract" with the labor group in under two weeks. Union officials have deemed the contract, which will replace its 2007 collective bargaining agreement, too restrictive on employee rights. It has already sparked an unfair labor practice complaint.

"If nothing changes, [bargaining unit employees] will need to comply with these sweeping changes until resolution through the courts is achieved," Morton said in the email, obtained by E&E News.

But in a separate email forwarded by Morton that was included with his message to union leaders, an EPA official said that after the agency announced last May that it wanted to renegotiate the contract, there had been "multiple discussions" with chief negotiators and communications with the union.

The official said in the email that the union declined to negotiate new ground rules for talks. "The Agency provides the Union with the attached to replace in its entirety the 2007 MCBA. The Agency intends to implement this on July 8, 2019," said the official.

Bargaining unit staff will have to work in the office for four days per week and can telework only one day per week. Further, limitations have been placed on the grievance process, including no longer allowing union representatives to use "official time" — work hours used for union activities — to pursue those complaints.

Morton also pointed to the inclusion of a new performance improvement plan in the contract, which he said may lead to employees being fired. "We are losing rights we currently enjoy," he said in the email.

In addition, union officials will be removed from EPA office space they currently use and will not be able to use EPA email accounts for union business under the new contract.

In an interview with E&E News, Morton said, "This is another method to weaken the ability of EPA to protect human health and the environment."

A senior career EPA official told E&E News the agency has been working to renegotiate a new contract for several years.

"This is not something that happened overnight. This has been a nine-year process," the official said. "The agency thinks what we are presenting is reasonable."

The official pointed to a process that stretches back to the prior administration, which included a settlement agreement with the union to enter into negotiations over a new contract. Notices of that settlement were required to be posted around the agency.

Morton acknowledged that there have been talks but said EPA is not allowed to toss the old agreement.

"We have had a process that we followed. Based on that process, they cannot open up the entire contract like they have," said the union president.

The EPA official defended the new contract set to be implemented in under two weeks.

"It is reasonable to look at the union space, as well, and that is what the contract does," the official said, noting passage of the Federal Assets Sale and Transfer Act of 2016, which tasked the federal government with reducing its real estate footprint. The official also said there are at least a dozen people whose EPA salary is devoted 100% to union business.

"We are not taking away official time. We are putting some bounds around it," said the official, adding that the agency is not taking away union officials’ ability to use email.

"They won’t be able to use their EPA accounts for union business," said the official.

In the new contract, union officials will have to "vacate any and all designated union offices, meeting spaces and bulletin boards" within 30 days of its implementation. In addition, the union cannot use EPA equipment, like computers, email accounts, photocopiers, fax machines and scanners, for union activity.

The new contract, slated to be in effect for seven years, already has its critics outside the agency. Tim Whitehouse, executive director of Public Employees for Environmental Responsibility, said EPA having the council and its affiliates move out of their office space is "an effort to humiliate the union."

He saw the new contract overall as a power play by EPA’s political leadership.

"This is part of a larger effort to exert real complete political control over EPA employees," said Whitehouse, himself a former senior EPA attorney. "This will have significant effect on EPA employee morale."

As EPA’s largest labor group, AFGE Council 238 represents more than 8,000 agency employees. It is made up of 14 local unions, which represent employees in the agency’s headquarters, its 10 regional offices and some of EPA’s laboratories.

AFGE Council 238 has been one of the more critical voices of EPA under the Trump administration.

The council helped launch the Save the U.S. EPA campaign and has organized protests and rallies at agency offices across the country. The union-led campaign also called on Scott Pruitt, President Trump’s first EPA administrator, to resign, which he did last July after facing a swirl of ethics allegations.

Last year, President Trump issued a trio of executive orders targeting federal employee unions, provisions of which were overturned in court. Also, the Department of Education and the Department of Health and Human Services under the Trump administration have been battling with their unions over tough new employee contracts that have similar provisions.

Jeanne Schulze, president of AFGE Local 1003, which represents about EPA Region 6 employees, said the new contract set to be implemented takes away employees’ due process rights.

"It appears to mirror much of what was in the executive orders that were deemed unlawful," Schulze said. "I think the articles are meant to be punitive and mean-spirited."

Still, the senior career EPA official said the agency has always been willing to bargain in good faith and the ball is now in the union’s court.

Morton said the EPA union is ready to fight back against the new contract.

"Yes, we want to use all the tools in the toolbox. The American citizens need to know that EPA Administrator Andrew Wheeler is weakening the agency by attacking its employees," Morton said.