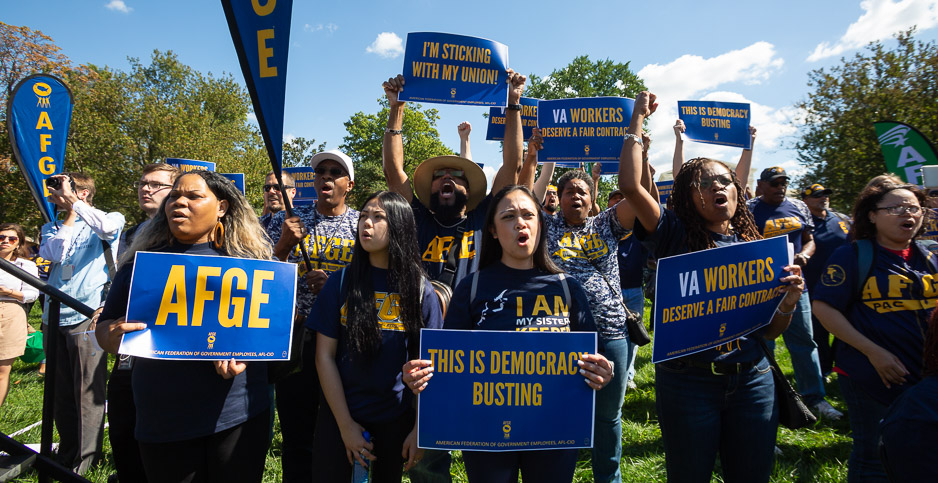 The American Federation of Government Employees, which represents about 7,500 EPA employees, earlier this week filed an unfair labor practice complaint against the agency. The complaint focuses on remarks Wheeler made in an EPA Region 8 staff meeting regarding recent talks over a new collective bargaining agreement between the union and EPA.

"Wheeler falsely stated that the agency had offered more telework flexibilities during contract negotiations but that the union ‘had turned that down because they wanted more benefits for union leadership,’" said the complaint.

Wheeler was confronted by a local union president, who was part of AFGE’s bargaining team, but he repeated his "false assertion" and said he would "release what the agency offered ‘so that everyone could see what the union turned down.’"

Those statements "chilled" the use of employees’ and the union’s rights and falsely maligned AFGE "with threats of penalty or reprisal," the complaint alleges.

EPA spokesman James Hewitt wrote in an email, "The Agency’s offer of increased telework flexibility during negotiations in return for AFGE’s agreement on Official Time and the Negotiated Grievance Procedure is very well documented."

"Official time" is the use of paid work hours for union activities.

Those two articles were not agreed on when contract talks between EPA and AFGE ended this May.

The grievance article is going through impasse proceedings and will be decided by the Federal Service Impasses Panel, AFGE spokesman Tim Kauffman confirmed to E&E News. He also confirmed AFGE alleged EPA had engaged in bad faith bargaining on the official time article, which is being investigated by the Federal Labor Relations Authority.

AFGE and EPA’s relations have been fraught lately as the two sides have been battling over the agency’s reopening plans during the COVID-19 pandemic. EPA has moved forward on a phased approach to reopen several offices, giving staff the option to return to the workplace, but the union has argued employees should remain teleworking so as not to be exposed to the virus on public transit and in the office.

Associate Deputy Administrator Doug Benevento is also named in AFGE’s complaint. It says that during another staff meeting in Region 8, he had "falsely disparaged and threatened the union and employees" in response to a question about bargaining EPA’s reopening plans during the pandemic.

He "falsely stated" the union had spoken to reporters about what he said in a briefing with the union, implying that EPA was refusing to deal with AFGE because it had supposedly improperly shared information with the media "despite the fact that such activity is protected by law," the complaint said.

"After Doug Benevento spoke with AFGE leadership on April 22, EPA received press inquiry almost immediately afterwards asking for comment on the matters in that briefing," said Hewitt with EPA.

AFGE’s complaint also foreshadows that there may be more changes ahead for EPA’s telework policy, a contentious subject for employees that has been targeted by the agency in the past. It alleges that Wheeler said that after the pandemic was over, "he intended to issue a new telework policy unilaterally without bargaining with the union."

Hewitt said that when contacted by the FLRA, EPA will provide "all requested documentation" to comply with its investigation.

After contract talks ended in May, AFGE’s local union presidents voted to ratify the agreement in June. By mid-July, the contract was in effect after it was approved in EPA’s review (Greenwire, July 16).

Last week, the union and the agency signed the contract and released separate statements to the press. EPA in its statement echoed Wheeler’s remarks, as reported in AFGE’s complaint, that the union rejected "workplace flexibilities."

AFGE President Everett Kelley said in a letter sent yesterday to Wheeler that the EPA administrator "repeated some of these lies last week in a press release" following the signing of the contract.

Saying he was "extremely disappointed about this behavior," Kelley said, "I want to clearly and unequivocally state that AFGE did not ever ‘trade’ a widespread telework benefit for employees for one benefiting only union representatives during our recent contract negotiations."

Kelley also noted in his letter that EPA had violated labor law in its dealings with the union. Last year, the FLRA found merit with the union’s charge that EPA had not bargained in good faith when it imposed a contract on AFGE’s bargaining unit employees (Greenwire, Oct. 31, 2019).

That contract, imposed by EPA in July 2019 after years of stop-start negotiations with AFGE, reduced telework, limited grievances and forced union officials out of agency office space.

AFGE pushed for new talks with EPA, which resulted in this recent contract. The union made some gains in the deal, including increasing telework and protections for employees’ health and safety.