Unions and EVs: Can Dems really have both? 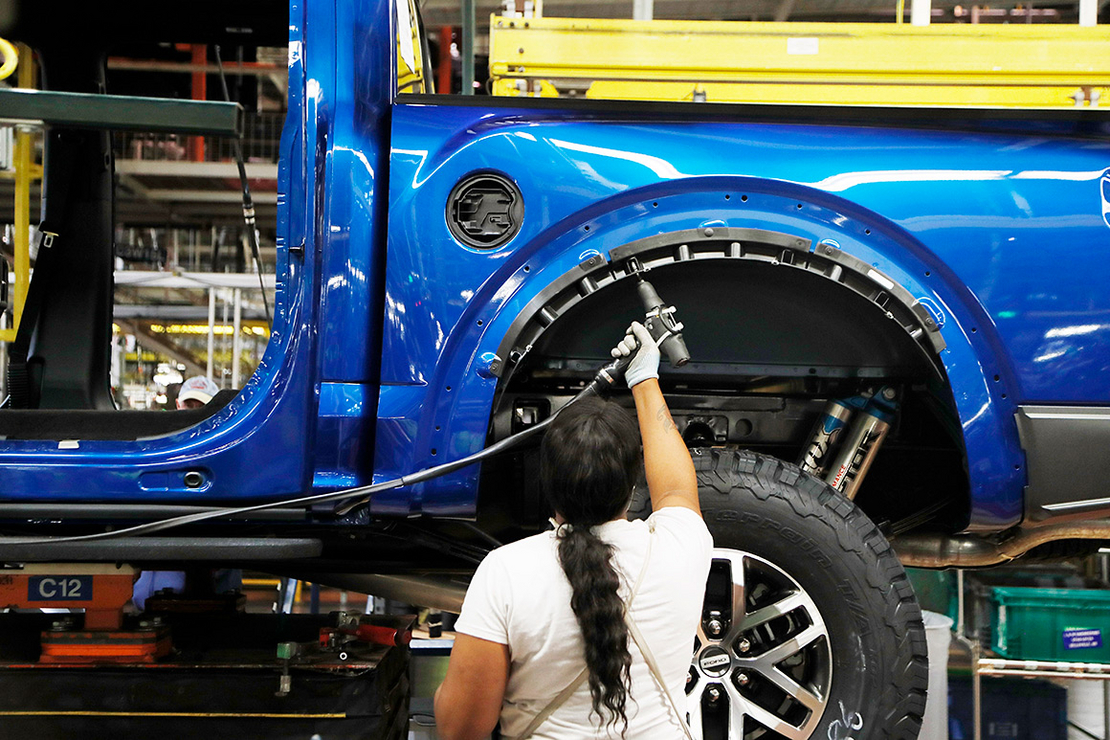 A United Auto Workers assemblyman works on a Ford F-150 truck being assembled at the Ford Rouge assembly plant, in Dearborn, Mich. New legislation in Congress would give tax breaks worth thousands of dollars to autos assembled with union labor. AP Photo/Carlos Osorio, File

Imagine two $40,000 American-made electric cars, one made by a unionized workers in Michigan and the other by nonunion workers in Tennessee. After a proposed federal tax break, the Tennessee vehicle would cost $32,500 and the Michigan one would cost $28,000. Is that fair?

Now imagine the workers who made those cars. The median hourly wage for a union Michigan assembly worker is about $21, while the nonunion Tennessee worker is $18. Is that fair?

These two questions are converging in the form of a controversial provision in the giant budget reconciliation package under consideration in Congress. For the first time, Congress is on the cusp of tying billions of dollars of vehicle subsidies to the labor status of the people making the vehicle.

The effort is unique because it hitches the uptake of EVs — and thus the trajectory of climate change — to labor policy, and specifically a bid to force automakers to drop decades of resistance to organized labor.

"It’s an interesting tool to use to try to create leverage," said Dan Gilmore, a labor attorney who has represented automakers and teaches labor issues at the University of Tennessee, Chattanooga. "This would be the first, I can’t think of another example."

It is one of the boldest union-building experiments yet by President Biden, who rarely misses a chance to link his economic and climate agenda to unions (Energywire, March 17).

Biden and his Democratic allies in Congress say more union representation in the workplace is crucial to raising wages and benefits and re-creating middle-class prosperity. But unable to pass legislation that would tilt labor law more in favor of workers, they are finding other ways to do it — in this case, in the form of a federal tax subsidy worth as much as $4,500 per vehicle.

"It’s employers who largely determine whether workers will organize based on the strength of their resistance," said Thomas Kochan, an industrial-relations professor at the Massachusetts Institute of Technology. "And that is a big social problem that needs to be addressed."

But critics say this social experiment might not work out the way that Democrats expect.

If those nonunion automakers don’t bow to the pressure, and if union organizers fail to win over the workers, Americans would be less able to afford the new EV models those automakers have coming. That, in turn, could dampen the adoption curve of electric vehicles and prolong U.S. dependence on fossil fuels that warm the climate.

One opponent is Joe Britton, the executive director of the Zero Emission Transportation Association (ZETA), which represents many players in the new EV ecosystem. The provision, he said, "detracts from the public-interest goal, which is driving down emissions and supporting the industry."

The provision has produced yelps of protest from automakers whose workers aren’t unionized. Reuters reported that on Tuesday, Elon Musk, the CEO of Tesla Inc., America’s leading electric automaker, said at a conference that the Biden administration is “not the friendliest” and “seems to be controlled by unions."

At least in the short term, the bill creates clear sets of winners and losers.

Both the U.S. House and the Senate have written union-friendly EV language into the massive reconciliation bill, which has a murky future as congressional negotiations intensify in Washington this week.

The two approaches are similar in that they are both authored by Democratic Michigan lawmakers who count unions as their base and who sit on powerful tax-writing committees. The House version was written by Rep. Dan Kildee, who sits on the House Ways and Means Committee, and the Senate version by Sen. Debbie Stabenow, who is on the Senate Finance Committee.

Both versions continue today’s $7,500 incentive to purchase any new EV and add $5,000 of incentives beyond that. How to spend that extra $5,000 is where the two diverge.

The House version goes all-in on unions, offering a $4,500 incentive if the vehicle is assembled in a factory organized "under a collective bargaining agreement" — in other words, where the workers are represented by a union. Another $500 incentive is awarded if the vehicle and its battery are mostly made domestically.

The Senate’s version offers $2,500 for union-made EVs and another $2,500 if the vehicle is assembled in the United States.

The impacts would differ among regions, and across automakers, because of stark divisions in how America’s automotive workforce is unionized.

The Midwest — home to General Motors Co., Ford Motor Co. and Stellantis NV brands like Dodge and Jeep — is where the U.S. auto industry began. Their workers have been represented by the United Auto Workers since the 1950s, and EVs made at their factories would get the full subsidy.

An entirely different story has unfolded in the southeastern United States.

There, a panoply of factories have been established by foreign-based automakers, from Germany’s BMW AG and Volkswagen Group of America, to Japan’s Toyota Motor Corp. and Nissan Motor Co., to South Korea’s Hyundai Motor Group and Kia Corp.

Those automakers made 46 percent of all U.S. vehicles last year, according to Autos Drive America, a foreign-automaker trade group. They are also investing billions of dollars to build EVs, including $118 million by Volvo Group in South Carolina and $7.4 billion by Hyundai, which has a factory in Alabama.

Not one of these factories is unionized. That includes Nissan, which has built the electric Nissan Leaf since 2010, and Volkswagen, which is spending $800 million to build an EV factory in Chattanooga, Tenn.

The automakers chose their locations partly because of the Southeast’s strong anti-union bias. Unionization efforts among workers at their plants have failed, and the workers generally have lower wages.

The Economic Policy Institute, a liberal think tank based in Washington, studied wages for automotive assembly workers without college degrees. It found that the median hourly wage for unionized workers in the last four years was $20.95, while nonunion wages were at $17.95.

The foreign-based automakers make higher profits from those lower wages. But they portray their objections to the EV subsidies as unfair to their workers.

"Their workers have not chosen to unionize," said Jennifer Safavian, the CEO of the Autos Drive America trade group, "and this discriminates against the vehicles they produce."

Yet another story emerges in California, where Tesla makes its electric cars and has hampered efforts by its workers to form a union.

In total, the bill creates a clear win for some and a clear loss for others — unless automakers bend to Congress’ will and find a way for their workers to collectively bargain.

Proponents of the measure say it is a fitting weapon to make nonunion automakers change their ways.

"Using taxpayer dollars to support temporary, $15 jobs is not a public benefit," said Jason Walsh, the executive director of the BlueGreen Alliance, an environmental and labor advocacy group that has lobbied for the measure. Some automakers do offer temporary jobs at lower wages.

A tax break that favors union labor, he said, "sends a signal to foreign auto companies, headquartered overseas, virtually all of whom are nonunion in the U.S. but union in their countries of origin, that they need to be consistent and need to actually in good faith be bargaining with their workers."

The problem, Walsh and others say, is that automakers are among the many U.S. companies that game loopholes in labor law and use their lopsided power over workers to snuff out union drives.

Gilmore, the Tennessee labor lawyer, said there’s a handy acronym for the actions a company can’t take: TIPS. An employer company can’t threaten, interrogate, promise or surveil. But that leaves plenty of creative ways for the employer to create an atmosphere hostile to union organizing, including compulsory meetings that serve up anti-union messages.

"Among the things that employers can do, there’s a lot more cans than can’ts," said Gilmore.

The union-friendly subsidy, if it does become law, would apply to almost no EVs that Americans can buy now.

The bestselling EVs of the year so far — Tesla’s Model 3 and Model Y, the Nissan Leaf, the Volkswagen ID.4, the Audi e-tron, and models by Kia and Hyundai — are either made abroad or by domestic, nonunion workers. One flagship EV, Ford’s Mustang Mach-E, is ineligible because it is made in Mexico.

One EV currently on sale that would be eligible is GM’s Chevrolet Bolt. However, production is currently halted as GM addresses a problem that causes battery fires.