Unions will help build Vineyard Wind, a win for McCarthy 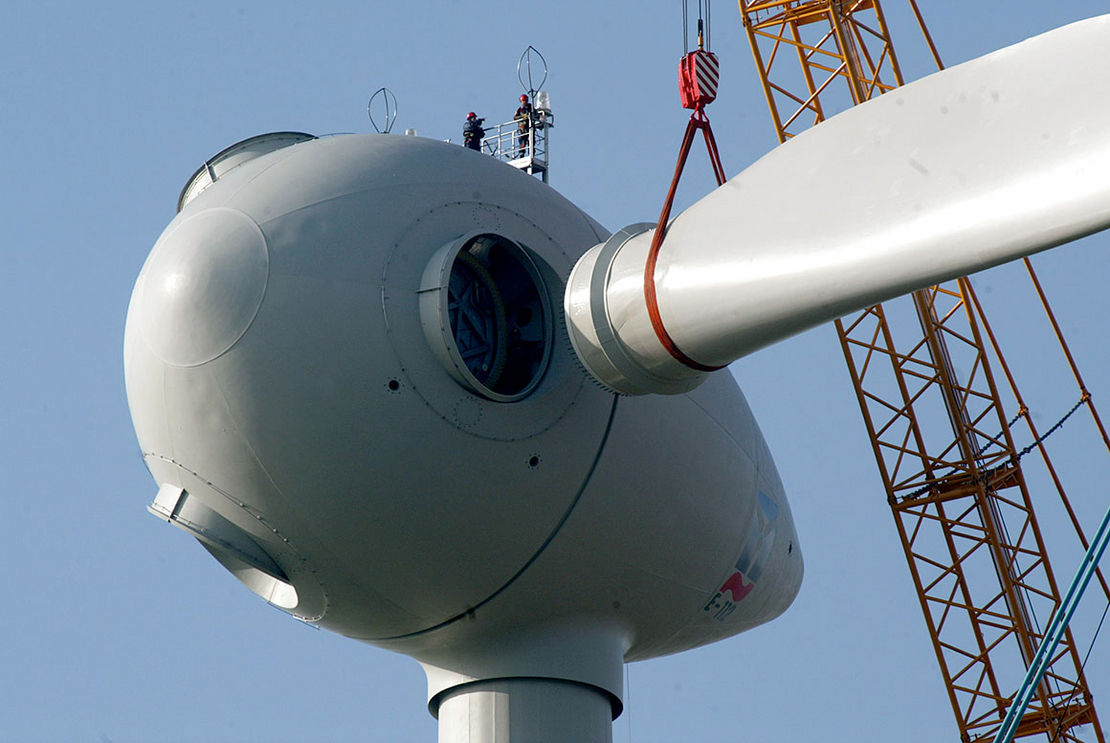 Workers fit the first of three blades onto a wind power generator in Germany. The Biden administration is celebrating its approval of the country's first major offshore wind facility. AP Photo/Joerg Sarbach

NEW BEDFORD, Mass. — Gina McCarthy was a midlevel Massachusetts bureaucrat when a developer first proposed building an offshore wind farm south of Cape Cod in 2000. Two decades later, she is on the cusp of helping make offshore wind in America a reality as President Biden’s top climate adviser.

McCarthy returned to her home state last week to celebrate the signing of a project labor agreement between 20 Massachusetts unions and Vineyard Wind, the developer of a 62-turbine project some 15 miles south of Martha’s Vineyard.

Her visit served as a milestone in a 20-year effort to build an offshore wind industry in America and showcased the industry’s importance to the White House’s climate and economic development agendas.

Biden has pledged to build a clean energy economy with union labor. The only problem: the fraught relationship between renewable developers and unions.

Friday’s event represented an opportunity to change that. The labor agreement signed at the New Bedford Marine Commerce Terminal ensures that 500 of 1,000 jobs to build the $2.8 billion project will go to union members.

“I am locked in the White House most times, but because this is about a project labor agreement, I am here and I will be here every single time,” McCarthy told the assembled crowd to raucous applause. “This project labor agreement is really a testament to the fact that unions built this country and, as President Biden says over and over again, the unions will build it back better.”

New Bedford, a port city of 95,000, has long hoped to establish itself as the would-be hub of an American offshore industry. In 2010, Massachusetts officials proposed building a marine terminal in the port to serve Cape Wind, a project proposed in Nantucket Sound. The terminal was completed in 2015, but Cape Wind failed in spectacular fashion, leaving the terminal to sit vacant for much of the last six years.

Yet the offshore wind industry, powered by its growth in Europe, has continued to expand. Turbines have grown larger, driving down installation costs, while states up and down the Eastern Seaboard have signed contracts with developers to buy electricity generated offshore.

The Biden administration is moving quickly to push the industry across the finish line. The newfound favor stands in contrast to a permitting bottleneck that developed during the Trump administration.

Vineyard Wind at one point looked like it may go the way of Cape Wind. The Trump administration was prepared to sign off on the project’s environmental permit in 2019 before abruptly announcing further study of its impact was needed (Climatewire, March 22). The announcement came amid rising pressure from fishermen opposed to the project over fears of its impact on their industry.

In late 2020, Vineyard Wind pulled its permit application just as it appeared the Trump administration was poised to issue an adverse ruling (Climatewire, Dec. 2, 2020). The developer said the move was needed to incorporate larger turbines, but it quickly refiled its application once Biden took office.

The Biden administration has sought to uncork the permitting bottleneck that formed during the Trump years. It signed off on a final permit for Vineyard Wind and announced plans to proceed with evaluations of four others. Biden has announced plans to build 30,000 megawatts of offshore wind power by 2030.

Friday’s event, held beneath a white tent on the empty asphalt of the marine terminal, featured a who’s who of the Massachusetts political establishment. Sens. Elizabeth Warren and Ed Markey were on hand, as were Reps. Jake Auchincloss and Bill Keating, all Democrats. Kathleen Theoharides, the Massachusetts secretary of energy and environmental affairs, was in attendance alongside a handful of influential state lawmakers and union leaders and New Bedford Mayor Jon Mitchell.

“Projects like this can and should be built by unions,” Warren said. “This project and the PLA we will be signing today are proof that we don’t have to chose between addressing climate change or creating economic development. When we do it right, we do both.”

Many of the speakers alluded to the project’s difficulties under the Trump administration. Theoharides thanked Markey for allowing her staff to crash in his Capitol office during “the dark days” when Massachusetts officials traveled to Washington to keep the project alive. Vineyard Wind CEO Lars Pedersen thanked Warren and Markey, saying, “you were always there when needed, and it has been needed.”

“This is actually marking the end of the beginning for U.S. offshore wind,” Pedersen said. “Now we’re moving into the future where we will be creating new jobs, sustainable jobs. So the sky is the limit.”

Vineyard Wind still could face legal challenges. Many observers expect fishermen to challenge the environmental permit issued by the Bureau of Ocean Energy Management, the lead federal permitting agency. But unlike Cape Wind, which was proposed at a time before the government had considered regulations for offshore wind, a federal process now exists for permitting offshore wind projects.

Friday’s event showed how tantalizingly close offshore wind supporters are to achieving their goals. Perhaps no one represented the industry’s promise more than Joshua Grigsby, a 36-year-old pile driver from Local 56 in Boston. Grigsby, who is Black, soon will begin training to work offshore.

His entry into offshore wind would represent a shift for the renewable energy industry, which is overwhelmingly white and employs relatively few union members.

“This will give me the ability to support my 5-year-old son and give him a better future,” Grigsby said. “I just look forward to telling him about me working on this project in the future.”

The crowd roared in approval.