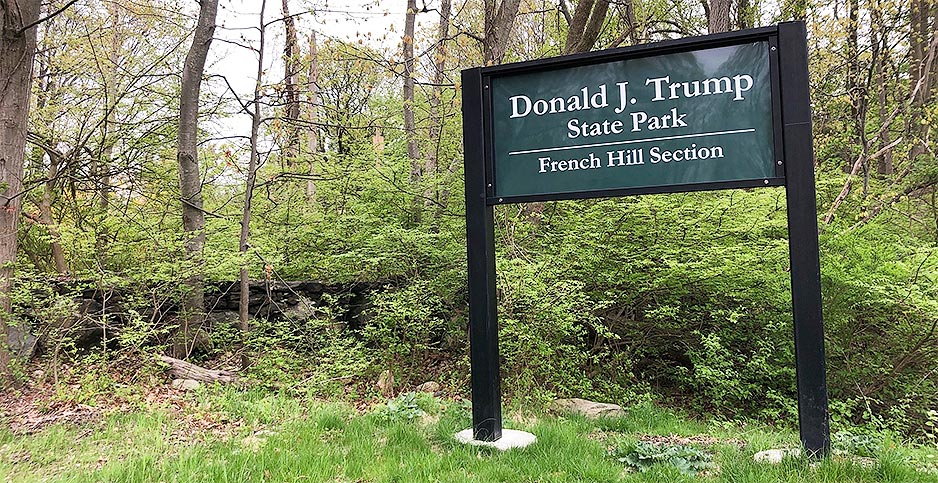 YORKTOWN, N.Y. — Donald Trump made only one demand in 2006 when he donated 436 acres of undeveloped land for a new state park in New York: It had to bear his name.

In typical Trump fashion, the future president expressed his hope that it would become "one of the most beautiful parks anywhere in the world."

But today it’s a far cry from that.

The road to Donald J. Trump State Park in the Hudson Valley is filled with potholes, and it’s difficult to find, situated at the end of an unmarked dead-end street. The park itself has no restrooms or garbage cans, no rangers or employees, no picnic tables, not even an entry booth. It does have plenty of weeds, dandelions, brush and trash.

"It’s not a coincidence that it’s hard to find, because I think the state is embarrassed," said state Sen. Brad Hoylman, a Manhattan Democrat, admittedly no Trump fan. "It’s a shambles, not too different from what we see in the day-to-day operations of the presidency."

Hoylman is leading a controversial effort to change the park’s name. He argues that the state Legislature can override Trump’s agreement with the parks department because local residents and lawmakers were never consulted. He introduced a bill in January that would remove the president’s name from the park.

Suggested new names are pointedly contrary to the Trumpian spirit. Hundreds of New Yorkers signed a petition urging the state to rename the park after another native son, the late Pete Seeger, a folk singer and social activist. Another petition called for renaming it after Heather Heyer, the 32-year-old woman who was struck by a car and killed in Charlottesville, Va., while protesting a 2017 white nationalist rally.

Nobody said much about the name for nearly a decade.

The uproar began in 2015, when Trump launched his presidential bid with remarks that many New Yorkers found offensive.

"I don’t think he deserves anything named after him, much less a state park," Hoylman said.

Not everyone feels the same.

Luigi Villella, a neighbor out walking his beagle in the park earlier this month, said the park should keep its name in honor of the 45th president.

"He owned it, right?" Villella said. "He’s the one who donated it. It’s plain and simple to understand. … A lot of people don’t agree with the way he does things, but you know what? Our country is in better shape than what it was two years ago, as far as I’m concerned."

He said there’s no way the park should be named after Pete Seeger: "Did that guy make music that helped this country?"

Trump wanted ‘to give something back’

The land wasn’t always meant to be a park.

At first, Trump wanted to use the land — two sections roughly 7 miles apart in Westchester and Putnam counties — to build two golf courses: On the 154-acre French Hill, a mix of meadows and woods where French soldiers camped after helping American soldiers battle England in 1781, and on the 282-acre Indian Hill, which includes former farm fields.

Trump abandoned his bid to build the golf courses in 2002.

Ultimately, he took a $26.1 million tax write-off for donating the land to the state, making it one of his largest charitable contributions, according to a 2016 Washington Post report. The Trump presidential campaign included the donation in a list of contributions first obtained by the Associated Press and then published later by the Post.

"This is my way of trying to give something back," Trump said at a ceremony that day, standing on land less than 50 miles north of Trump Tower in New York City. Pataki’s office included Trump’s remarks in a statement released to the media.

When budget cuts hit in 2010, state officials wanted to temporarily close the park, though Trump threatened to reclaim the land if they did. He warned the state again in 2015 that he’d take the land back if the name of the park was changed, The New York Times reported.

The Yorktown Dog Park Committee briefly lobbied to use part of the site as a dog park, but that plan failed, too.

The fight over the land has been both long and passionate.

Signs advertising the park on the Taconic State Parkway have been defaced and vandalized. Democratic Assemblywoman Nily Rozic of Queens received hate mail and threats after she introduced a name change bill.

While the park remains officially open, the state parks department doesn’t even bother to list it on its website.

The park’s location is a secret even to many people who live nearby and routinely drive by the large green signs advertising it on the state parkway. Some deride them as "signs to nowhere."

David Merle, who bought a house only a mile from the park two years ago, said he commuted regularly on the parkway and quickly became familiar with the signs, finding it curious that he never became aware of a real park.

"If people seek to go to Donald Trump park, they’re going to be in trouble," Merle said.

The reason is simple: Trump’s contract with the state called for the large highway signs, but that’s where the guidance ends. There are no more signs leading visitors to the park once they pull off the Taconic.

(Hint: To find the French Hill section, take Exit 14 and turn right, then look for a dead-end sign that faces the opposite direction. Take a sharp right there, and you’ll be on Old Baldwin Road; follow it up a hill, and you’ll see the park on the left.)

Some neighbors suspect the state is trying to keep visitors away.

"I imagine they don’t want you to know," said Dave Rocco, who lives between the two park sections and headed the failed dog park committee. "They’re beautiful pieces of property. It’s a shame that New York Parks doesn’t do anything about it." But, he surmised: "Their priority is the other parks that need to be updated."

But Dan Keefe, deputy public information officer for the New York State Office of Parks, Recreation and Historic Preservation, said the state actually spent $385,000 on improvements to the park last year. That included demolition of an old residential property and a swimming pool and installation of two small parking lots.

"It is managed as an undeveloped, passive park — to preserve open space and provide low-impact recreation such as hiking and birdwatching," Keefe said.

This year marks the third try at renaming the park, after similar efforts last year and in 2016 failed to move.

The issue has blurred party lines and sparked disagreement over who should be involved.

Former Democratic state Sen. Rubén Díaz Sr., a minister who’s now a New York City councilman, was among those who came to Trump’s defense, saying it would be immoral to change the name after Trump signed an agreement.

"A deal is a deal, and deals should be read carefully, knowing the consequences — good or bad — because once you sign onto one, it’s a deal," he wrote in a 2016 column.

But Republican Pataki expressed regret over the name in 2016 after he had competed with Trump for the GOP presidential nomination, even though he once praised Trump "for his vision and commitment" in preserving the land.

"I wish it didn’t have his name on it," Pataki said in an interview with Time Warner Cable News’ "Capital Tonight," a show that covers New York politics.

One complicating factor in the debate is deeply divided politics of the region where the park is located. Westchester County, which is closer to New York City, is Democratic terrain, carried by a 2-to-1 margin in 2016 by former Secretary of State Hillary Clinton, who also represented New York in the Senate for two terms.

Many of the park’s neighbors dislike that politicians from outside the area are getting involved.

Some are still steamed that the nearby Tappan Zee Bridge that spans the Hudson River was renamed the Gov. Mario M. Cuomo Bridge, honoring the former Democratic governor from New York and the father of the state’s current governor, Andrew Cuomo.

"The complaints from elected officials shouldn’t be coming from people in Lower Manhattan or upstate New York or Long Island," Rocco said. "As far as I’m concerned, these people are trying to make names for themselves to get into the mix."

The local state assemblyman, Republican Kevin Byrne, could not be reached for comment, but he told the Yorktown News earlier this year that Hoylman’s bill was a "partisan charade" and that the name should not be changed.

Hoylman said the park only serves as "a jarring reminder" that a there’s a New Yorker in the White House who does not represent the values of many of the park’s nearby residents.

"The parks department doesn’t embrace it as a state park, it’s poorly maintained, and I think his name should be stripped and we should start over," he said. "The Legislature should be able to weigh in on the name of a park that we think is not fitting for state property."

As politicians duke it out, the park itself draws few visitors and is eerily quiet, save for the steady buzz of traffic on the nearby parkway.

"The only people that use it are people that walk for exercise or walk their dogs, and that’s about it," Villella said.

With no park rangers or employees on the site, he said he brings his own garbage bags when he conditions his dogs at the park.

"I fell in love with this park," he said. "I got my clippers. I cleaned up the entire trail. I took two garbage bags full of garbage out of here. What they should do is have the rangers patrol it more."

Hoylman said he’s hopeful that his bill will gain traction in the Legislature this year, now that the state budget has been approved.

And with Democrats in charge of state government, Merle said he thinks there’s at least a possibility it will pass.

He noted the differences between Donald J. Trump State Park and Franklin D. Roosevelt State Park, which is just one exit down on the Taconic State Parkway. There’s no controversy over the park named after FDR, which Merle said is "all you would hope for from a state park."