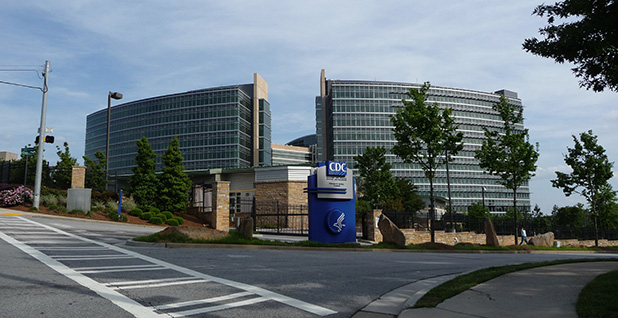 The Centers for Disease Control and Prevention headquarters in Atlanta. Daniel Mayer/Wikimedia Commons

A new threat may be awaiting federal employees returning to work in buildings that have sat unused for months during the national pandemic: Legionnaires’ disease.

The Centers for Disease Control and Prevention this weekend confirmed it had to close office space it leases in Atlanta after Legionella bacteria, which spread through mist and can cause deadly pneumonia, were detected in the water systems there. Legionella was first discovered after an outbreak in 1976 among people who went to a Philadelphia convention of the American Legion, according to the CDC.

Legionella can grow and spread in pipes holding warm, stagnant water that isn’t properly disinfected and flushed. The bacteria can then be sent into the air when toilets are flushed and sinks are turned on, causing disease when people breathe in small contaminated water droplets.

"During the recent closures at our leased space in Atlanta, working through the General Services Administration (GSA), CDC directed the landlord to take protective actions," the CDC said in a statement.

"Despite their best efforts, CDC has been notified that Legionella, which can cause Legionnaires’ Disease, is present in a cooling tower as well as in some water sources in the buildings. Out of an abundance of caution, we have closed these buildings until successful remediation is complete."

American Federation of Government Employees Local 2883, the union representing nonprofessional employees at the CDC in Atlanta, is "outraged" the CDC didn’t notify the group of the closures due to Legionella, according to a spokesperson who said they first learned of the closures through E&E News.

The pandemic has led to the widespread shutdown of millions of buildings across the country, forcing employers and workers to tackle stagnant water that may contain lead, copper and bacteria like Legionella upon return. Currently, there are no national or industry guidelines for reopening buildings after extended shutdowns, but the CDC has posted guidance on its website to minimize the risk of Legionnaires’ disease before reopening.

Andrew Whelton, an associate professor of civil, environmental and ecological engineering at Purdue University, said the CDC’s decision to ask its landlords in Atlanta to test for the bacteria was "a very good thing" and reflects the agency’s forward-leaning approach to keeping employees safe.

But Whelton added that it’s not known whether similar testing was conducted across the federal government and that he’s fielded questions from federal agency unions concerned about employees returning to work post-pandemic and whether water systems are being properly tested.

The Energy Department did not immediately respond when asked about the presence of the bacteria in its buildings’ water systems.

EPA, which works with GSA to maintain water systems in all agency-owned facilities and GSA-managed facilities, said it adheres to CDC guidance. EPA also said that it is not aware of any facility having an issue with Legionella during the pandemic and that few facilities were completely shut down for an extended period.

Conner Swanson, a spokesman for the Department of the Interior, said the agency has not detected any Legionella bacteria in its buildings, at either headquarters, regional offices or other agency facilities. Swanson also said Interior has followed CDC guidelines to minimize Legionella risk before reopening its buildings.

Whelton said building owners face a dizzying amount of conflicting and incomplete state and federal information about how to guard against Legionnaires’ disease, and there’s little transparency and oversight.

"There’s no requirement to conduct testing to do these actions. As mentioned, these are guidelines; these are not enforceable guidelines," he said. "There’s a huge gap there, there’s no oversight agency. … There’s been no national effort to move the ball forward."

The CDC guidance calls on building owners to develop a comprehensive water management program for water systems and all devices that use water and ensure water heaters are properly maintained and temperature is correctly set. Owners should also flush water systems and ensure cooling towers are clean and well-maintained.

But Whelton said most buildings don’t have such a program and noted owners face more than 60 guidance documents — all of which differ — on how to best protect facilities from Legionnaires’ disease.

In general, Legionnaires’ disease is deadly for about 10% of people who get it, according to the CDC.

The agency on its website directs people at increased risk of developing the disease, including those with weakened immune systems, to wear an air-purifying respirator in enclosed spaces where aerosol generation is likely and to consult with a medical provider regarding "participation in flushing, cooling tower cleaning, or those activities that may generate aerosols."

Steps for treating Legionella will depend on the amount detected, Whelton said, and may require flushing the system with chlorinated water from the utility or more aggressive steps for higher amounts.

"It all really depends on the risk factors. Who’s in the building, do they have immunocompromised immune systems, how can people be exposed, are there showers, are there misters?" he said.