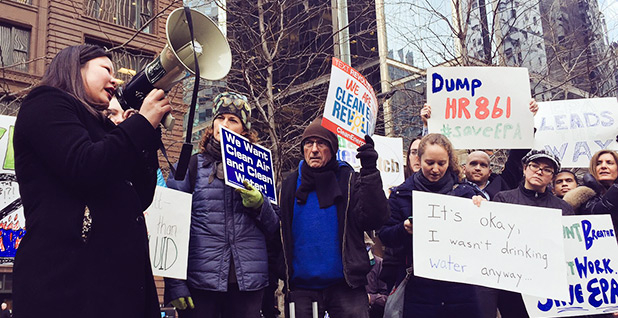 Some EPA employees are eager for House Democrats to investigate their agency's leadership. Pictured are EPA workers protesting the administration in Chicago last year. Sierra Club/Flickr

EPA employees will have newly empowered allies on Capitol Hill next year.

Under the Trump administration, career staff at the agency have seen colleagues leave in the hundreds while faced with proposed budget cuts by the White House. Some are now comforted by the upcoming change in House leadership as Democrats prepare to take charge next year. They believe that protection for employees is on the way.

"Everyone has let out a sigh of relief that at least for the next two years, our budget and jobs should be safe," said an EPA employee. "I know folks are looking forward to January when the next Congress starts. Positively upbeat is how my friends and I are, though we still have the Senate to deal with."

That person added, "Most people I talked with are hoping for a decent raise, for a change."

"I think people are guardedly optimistic that the free rein of the administration is over and its regulatory rollbacks get some pushback," he said, adding, "Hopefully, we will become more pro-environment."

"Everyone here at EPA Region 5 and elsewhere in the agency work here because they believe in the mission, which is protect the environment, not doing something else," said Mikulka, also a spokesman for the Save the U.S. EPA campaign.

William Reilly, who served as EPA administrator during the George H.W. Bush administration, said a Democratic House should help protect the agency.

"I think the integrity of the agency — its funding and the positive interest of at least one house of Congress — all bode well for the career people at EPA," Reilly said.

"I would expect the House oversight function to be informed by both environmental NGOs [nongovernmental organizations] and the scientific community to solicit the EPA professionals about areas of public policy that have been neglected by an administration focused on deregulation."

"I was very pleased with the results last night regarding the House; looking forward to a change on how federal employees are viewed, and maybe now they will receive the praise for all their hard work," Morton told E&E News.

"Federal employees bore the brunt of the demonizing attempts of the administration. Hopefully, they will get a fair shake now."

Trump has offered deep cuts to EPA’s funding in the past, which lawmakers in both parties have rejected to keep the agency’s budget relatively the same. Democrats will now lead the House Appropriations Committee and have more power to block proposed EPA cuts in the future.

"We have some really good champions there on the Appropriations Committee," Mikulka said.

Reilly also said he expects the House to increase oversight of EPA, focusing on the agency’s use of science, "beginning with the flawed risk assessment underlying the proposed changes to the automobile fuel efficiency standards."

With Democrats soon to be in charge of the House, they will have new investigatory powers to dig even deeper into EPA operations under the Trump administration. Those lawmakers will be a welcomed outlet for employees at the agency who want to share information.

"With the House in the Democratic hands, there’s going to be a lot of stuff being fed to Congress," a longtime EPA career employee told E&E News today.

During the Reagan administration, the Democratic-led House voted to cite then-EPA chief Anne Gorsuch Burford with contempt of Congress after she refused to hand over subpoenaed documents pertaining to the agency’s embattled Superfund program. Rita Lavelle, EPA’s Superfund chief under Reagan, was sentenced to prison for lying to Congress in relation to that scandal.

"There will be more accountability and oversight, and that will affect EPA policy to the good," said the longtime EPA employee, who added that politics are different now. "The country has changed, and the world has changed. We’re not as civilized as we used to be back then, so some of the antics of Rita Lavelle would not shock the conscience of America in 2018 as it did in America in 1982."

Since scandal-plagued Administrator Scott Pruitt was replaced in July by acting EPA chief Andrew Wheeler, there might be less of an appetite among House Democrats to grill the agency boss.

Wheeler "is not a crook like Pruitt was," said the longtime employee. "The question is whether Pruitt will be prosecuted for some of the foolishness he was involved in. I don’t know; I can’t even remember what he looks like."

Reilly doesn’t see the need for subpoenas at Wheeler’s EPA.

"I think we need to recognize that a lot of us will have positions adversarial to Wheeler, but that doesn’t call into question his basic integrity, like that first year did with Pruitt," Reilly said.

‘I’m sure we will comply’

Political staff at EPA anticipated that a change was coming in Congress.

"We already know incoming chairmen and women have a list of subpoenas and document requests they will want to issue. I’m sure we will comply with all those requests as they come," said one EPA political appointee when asked about the Democrats’ takeover of the House.

Expectations at the agency were that Republicans would lose the House, and tougher oversight from the new committee heads would follow. The appointee, however, pointed to GOP gains in the Senate that could help staff up leadership at the agency, including bringing on Wheeler permanently as administrator along with other nominees to lead EPA’s solid waste, chemicals and international affairs offices.

"Hopefully, with increased numbers in [the] Senate, we can get Andrew nominated and confirmed, then get [nominees] like Peter Wright, Alex Dunn, Chad McIntosh confirmed, as well," said the appointee.

Another career employee, however, celebrated the Democrats’ victory in the House.

"I am personally thrilled to have restored some balance of power in the nation," said the employee, who wasn’t surprised that Trump tried to declare a personal victory with the election results.

"Just wait," that employee said. "The reckoning will come."