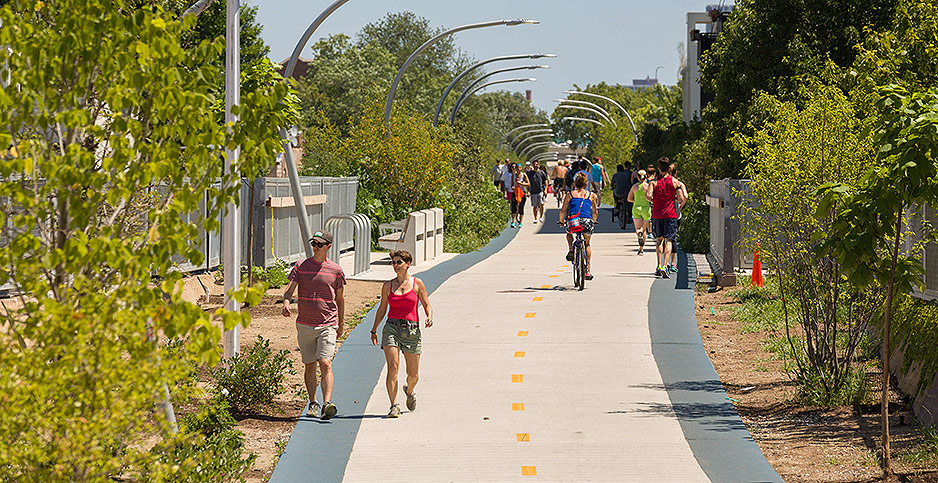 The Bloomingdale Trail was built along an old elevated train line in Chicago. Richard Ellis/ZUMA Press/Newscom

Stretching nearly 3 miles along a former elevated train track in Chicago, the Bloomingdale Trail draws pedestrians and cyclists down its paved path — the centerpiece of a park system often cited as a model urban green space that integrates access, recreation and transportation.

But conservationists see another untapped potential for the site and similar urban greenways: inclusion in the Biden administration’s push to conserve 30% of the nation’s lands by 2030.

Waterman pointed to the Illinois park, known as the 606, as one of dozens of examples of small urban parks and greenways — along with sites like Fairmount Park in Philadelphia and the Lafitte Greenway in New Orleans — that could become vital to meeting President Biden’s "30×30" pledge.

Proponents of including urban parks in the 30×30 tally argue the sites address issues like stormwater runoff, transportation and air quality, all of which can contribute to the conservation program’s goal of mitigating climate change. The designations could likewise benefit metropolitan areas by potentially funneling funds for new parks into areas that need them.

"If we’re talking about sequestering CO2, then we definitely should be including these parks that are providing transportation options and keeping people off the road," Waterman said.

The Interior Department has yet to detail exactly how it will calculate progress on Biden’s 30×30 pledge or how officials plan to define whether they have succeeded in conserving lands in a natural state. The agency, which must submit a report April 27 recommending steps the nation can take to meet the conservation goals, has so far stuck to highlighting data compiled by the U.S. Geological Survey.

To date, only 12% of the nation’s lands are permanently protected in a natural state, as are about 23% of its oceans, according to USGS.

But the Biden administration should focus more on the broader goals of 30×30, including halting climate change and encouraging biodiversity, than about maintaining a rigid state of "naturalism," Waterman said.

"There’s a lot of opportunity for cities to create new green spaces … in these vacant lots, in these brownfields," she said.

Similarly, Simone Lightfoot, the National Wildlife Federation’s associate vice president for environmental justice and climate justice, said she would like to see the 30×30 effort include urban features, like tree canopies, as well as improving existing green infrastructure.

"The challenge is the words don’t necessarily have the meat put to the bones yet," acknowledged Lightfoot. "There really is a great need for the community to come in … and share different visions and versions of what this language could be, and more importantly what they need it to be."

Lightfoot noted that "public lands" in the context of urban and metropolitan areas might include a vacant lot or other unattended land that can burden city budgets.

"We have this notion in the conservation world where it’s scale, scale, scale," Lightfoot said. "Some projects, many of them, are local solutions for local challenges."

She later added: "Oftentime in the conservation world, there’s conversation around creating new parks and having parks 10 minutes away, and all those fancy things, but my cities just need the land taken care of they already have."

Colorado Rep. Joe Neguse (D), whose district seat spans from the Pike National Forest to the Wyoming border and includes the cities of Boulder and Fort Collins, recently told constituents that he would like to see a greater variety of land considered for conservation.

"When we talk about 30×30, there is a tendency to assume that we’re taking about lands that are far off and at a distance, and that’s not necessarily the case," Neguse said at an April 1 virtual town hall meeting focused on Natural Resources Committee issues. "We’re talking about incredible, treasured open spaces that many of us grew up with in our communities, in urban communities that are no longer in existence as a result of development."