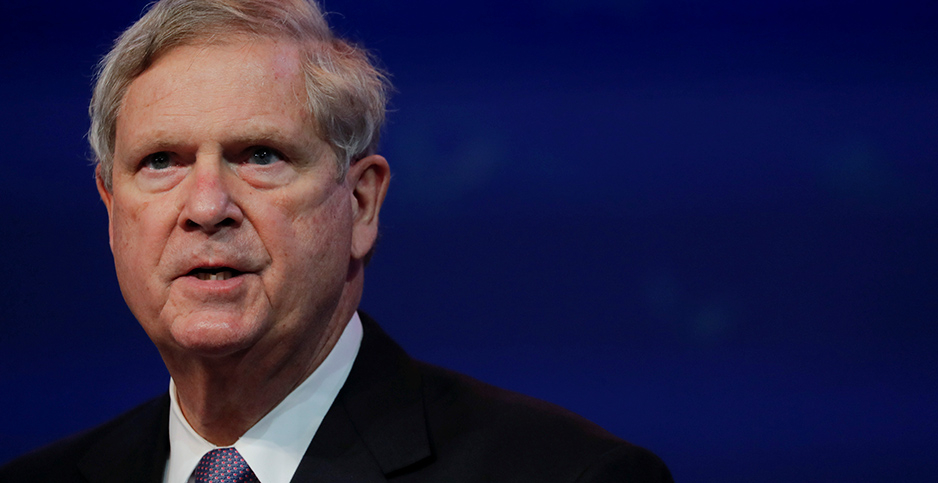 Agriculture Secretary Tom Vilsack speaking last December after he was announced as President Biden's pick to head the department. Biden Transition via CNP/Newscom

Speaking to the National Farmers Union’s virtual annual convention, Vilsack said he’ll make equal treatment across programs a top priority. And he pointed to an announcement earlier today that USDA will hire a senior adviser for racial equity, Dewayne Goldmon.

Barely a week into a job that he held for eight years during the Obama administration, Vilsack said he and USDA have both changed since his first stint there. Social justice, including systemic racism, has gained more visibility, highlighting the department’s history of discrimination in farm programs.

Overall, Vilsack said, the department under his leadership will be a "very active and proactive USDA."

Goldmon, the new senior adviser, comes to the secretary’s office from the National Black Growers Council, where he’s been executive director for a year and also helped with the organization’s formation. He is a farmer in Arkansas and had a career with Monsanto Co., first as a researcher and later in government relations and human resources.

"With Dewayne’s guidance, we will build a USDA that represents and serves all Americans — a USDA that is committed to ensuring equity across the Department, removing barriers to access and rooting out systemic discrimination, and building a workforce that reflects all of America," Vilsack said in a news release.

The swift outreach on racial equity comes after some social justice groups complained about Vilsack’s selection as USDA secretary, saying they’d have preferred a candidate of color such as Rep. Marcia Fudge (D-Ohio), an earlier-rumored possible pick. President Biden chose her for secretary of the Department of Housing and Urban Development instead (Greenwire, Dec. 9, 2020).

In his talk with the farmers union, Vilsack repeated his pledge to elevate climate-related policies, including promoting carbon markets that could make conservation more profitable for farmers.

As the country confronts the issue, Vilsack said, "It’s going to be necessary for us to reduce emissions across the board."

Whatever system emerges in agriculture, he said, should be designed by farmers for farmers and generate income for them. While traditional conservation programs at USDA must be a part of the effort, he said, the department should encourage new technology.

One idea from the dairy industry, Vilsack said, is finding ways to extract and use water and nutrients from manure. Solid nutrients could be formed into pellets for export, he said, providing a "tremendous new opportunity."

Between his last tenure at USDA and his new job there, Vilsack worked in the dairy industry as executive director of the U.S. Dairy Export Council.