USDA may have flouted Congress in agency relocations 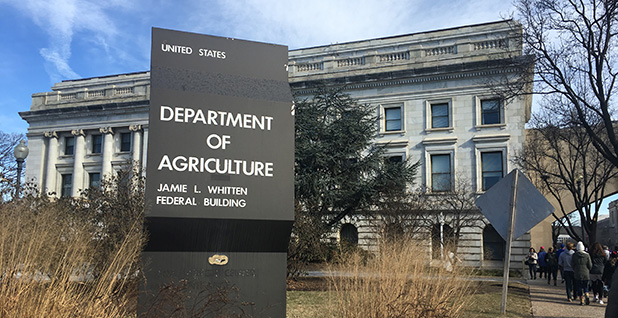 An inspector general review says the Department of Agriculture could have exceeded its spending authority in its agency relocation plans. Claudine Hellmuth/E&E News

The Department of Agriculture may have exceeded its spending authority when it moved forward with plans to relocate two of its research agencies, an inspector general review said.

The report found that while USDA had the legal authority to relocate the Economic Research Service and the National Institute of Food and Agriculture, it may not have received prior approval from Congress to use funds for that purpose. USDA is calling such prior approval unconstitutional.

The highly controversial reorganization would shift department staff in the two agencies out of Washington, D.C., and into the Kansas City area (Greenwire, June 13).

USDA has argued that the change would help with attracting and retaining staff, would cut costs to the agency, and would put department resources closer to "stakeholders who live and work outside the National Capitol Region."

However, comments from White House Office of Management and Budget Director Mick Mulvaney yesterday have furthered concerns that the move was meant as a way to shrink the federal workforce and to undercut research on topics like climate change (Greenwire, Aug. 5).

The USDA inspector general found the department did have authority under both its own reorganization plan and from the General Services Administration’s Federal Management Regulation to undertake the relocations, but may not have received necessary approval from lawmakers before beginning to expend funds.

That could be a violation of the Antideficiency Act. The ADA prevents government employees from involving the federal government in a contract before an appropriation has been made.

In the case of both the ERS and NIFA relocations, the administration gave written notice of the proposed moves in letters to Congress detailing its intention to get help from the private sector in finding a new location for the research agencies and gauging public interest in the moves.

"While we recognize that the Department notified Congress as required, Section 717(a) [of 2018 spending legislation] also requires that the Department receive Congressional approval prior to its reprogramming and use of appropriated funds for the purpose of such relocation. That prior approval did not appear to have been granted," the report says of the ERS move.

The report said that to use part of the $6 million appropriation, USDA had to submit a report to Congress within 60 days of the Omnibus Act’s March 23, 2018, enactment.

The agency sent letters to Congress on Aug. 9 notifying lawmakers of the intent to hire private contractors. "However, approximately 139 days elapsed between the March 23, 2018, enactment of the Omnibus Act and the date the Department submitted its letters to Congress," the report read.

The inspector general also cited another requirement under the Omnibus Act to provide 30 days’ written notice and approval for actions involving relocation of staff or reprogramming.

In a statement, an agency press aide noted that the Office of the Inspector General report affirmed USDA’s legal authority to follow through with the relocations.

"To say the Department was out of step with budgetary requirements disregards the authority given to the Executive Branch by the U.S. Constitution," said the statement.

"The Department is not required to abide by provisions that have been deemed unconstitutional, therefore we will not take the OIG’s recommendation to ignore nearly forty years of precedent set by the Supreme Court, Office of Legal Counsel, and the Government Accountability Office — an arm of Congress."

The agency cited the 1983 Supreme Court case Immigration and Natural Service v. Chadha, which found a single house of Congress couldn’t overturn an act already authorized by the executive branch.

"Since the Inspector General affirms the Department has the legal authority and we do not agree with the unconstitutional budgetary provision, this case is closed," said the USDA statement. "This is opinion based on policy decisions that have no basis in fact."