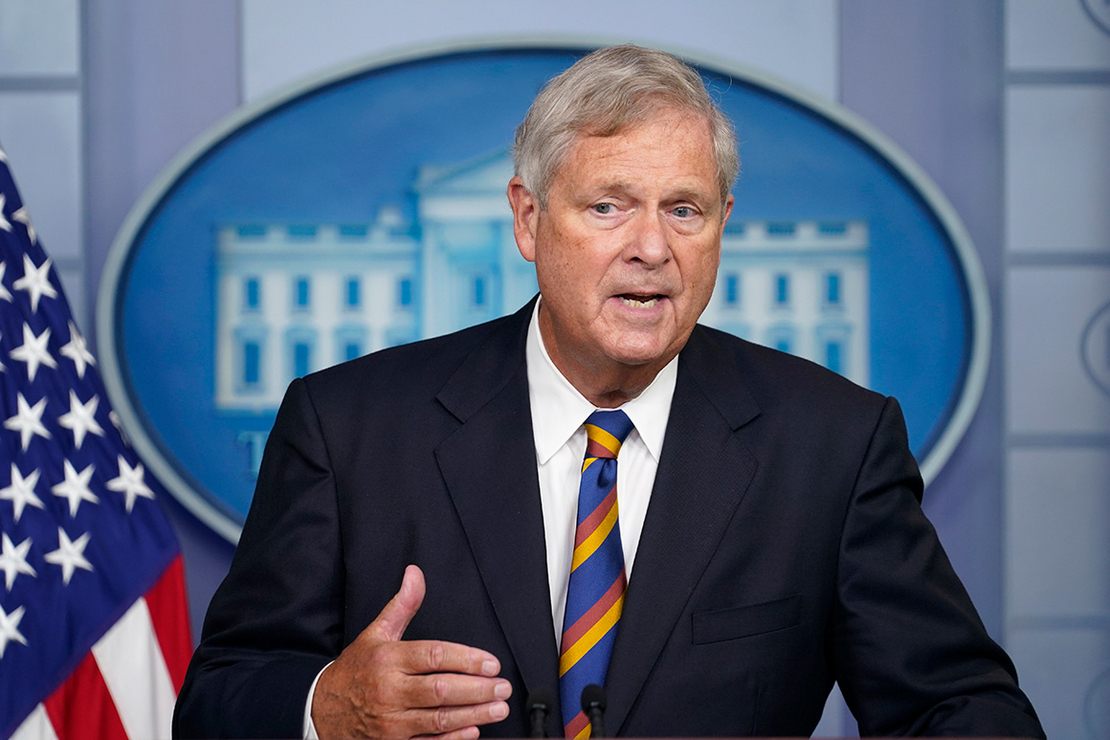 Agriculture Secretary Tom Vilsack speaking earlier this month at the daily briefing at the White House.

Agriculture Secretary Tom Vilsack said today he’ll use billions of dollars from a Depression-era agency to pay for a carbon-saving program for farms, and to help farmers prepare for drought and adverse weather associated with climate change.

In a speech at Colorado State University, Vilsack said he would transfer money from the Commodity Credit Corp. for a variety of efforts, including a proposed pilot program to test conservation practices’ carbon benefits and to more closely monitor for diseases such as African swine fever, which has appeared as close by as Haiti and the Dominican Republic.

Drought in the Southwest has been “unyielding, unprecedented and unforgiving,” and farmers in the South and Northeast have been swamped by heavy rain and wind, Vilsack said in announcing the first of two infusion of funds – $3 billion now for the assistance, and more in fiscal 2022 for the carbon pilot program, details of which are to be determined. “All of these folks need help,” he said.

Vilsack’s move is certain to recharge a debate over the most appropriate uses of the Commodity Credit Corp., created decades ago to support U.S. agriculture and uphold prices through the purchase of farm goods, for instance. Congressional Republicans have said they worry that the Biden administration will use the CCC to support a carbon bank or carbon markets, taking funding away from its traditional uses — a charge Vilsack addressed directly today.

“This is not a carbon bank or a carbon market,” Vilsack said, adding that it’s “first and foremost a commodity program.”

In his speech, Vilsack cast the initiative as supporting “climate-smart commodities,” or farm goods produced through practices that address carbon emissions their effect on the climate.

The Agriculture Department added in a news release, “The pilots could rely on the Commodity Credit Corporation’s specific power to aid in expansion or development of new and additional markets.”

The pilot program will be open to public comment for 30 days, Vilsack said, which is a request for information and suggestions rather than a formal rulemaking.

The announcement also reflects Vilsack’s comments during congressional hearings this year that he sees the CCC has having wide authorities and a broad mission of support for farmers. The agency has an annual budget of about $30 billion.

Carbon pilot projects would encourage farming practices already included in USDA programs, such as the use of cover crops or reduced tillage, and would monitor the results in carbon emissions or sequestration.

Of the $3 billion, $500 million would go to drought recovery and adoption of water-saving practices; $500 million to help producers hurt by agricultural market disruptions; and $500 million to prevent the spread of African swine fever, which Vilsack said could cost thousands of jobs and disrupt the U.S. hog industry.

“This is unprecedented both in terms of the amount dedicated to one animal disease and of getting the funds upfront, before we have the disease in the U.S.,” said Bob Acord, a consultant to the group and a former USDA animal health official, in an NPPC news release.

But the biggest piece — $1.5 billion — would help schools struggling with food supply disruptions, the department said.

Vilsack said the initiative would also steer money to biofuels, which he said will help in climate efforts, including promoting their use as jet fuel — an announcement cheered by the Renewable Fuels Association.