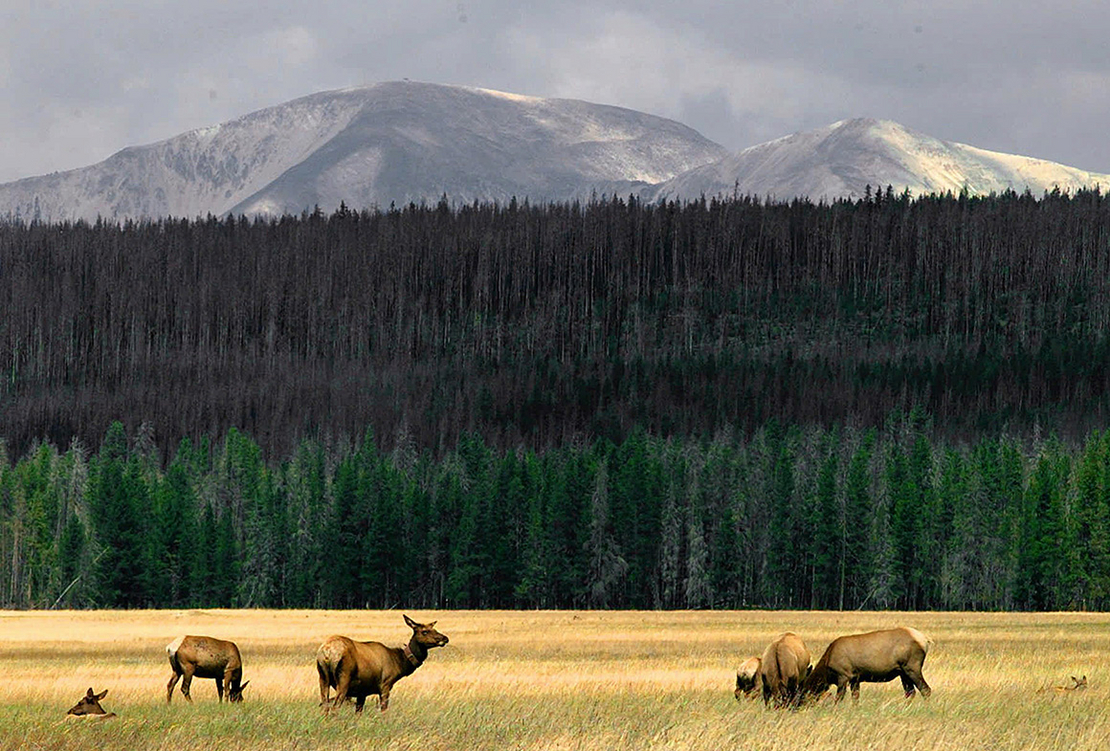 A herd of elk grazing in 1997 in the meadows of Yellowstone National Park in Wyoming. In the background are Mount Holmes (left) and Mount Dome. Kevork Djansezian/AP Photo

The Department of Agriculture and the state of Wyoming today announced a set of conservation measures to protect habitat for migratory big game animals.

The USDA said it would spend an initial $15 million through existing conservation programs to prevent development of agricultural lands and enroll privately owned land in multiyear contracts to maintain big game habitat.

“Conserving America’s most iconic wildlife and wildlife migration corridors depends on the conservation of private working lands and tribal lands through voluntary, collaborative incentives that reward farmers, ranchers and forest owners for stewardship of their lands,” Bonnie said in a news release, adding that the agreement came through conversations with state officials and local organizations.

The effort is a pilot project aimed at encouraging conservation on wide swaths of private lands that might otherwise be developed for uses not compatible with migrating game animals. The department said lessons drawn from the experiment could be applied more widely across the West as part of the Biden administration’s conservation agenda.

Among other practices, the money could be used for ensuring that fences used on working agricultural lands are compatible with migrating animals, the department said. Wet meadow restoration, removal of encroaching woods and restoring stands of degraded aspen trees are other examples, the USDA said.

“People respond to market signals. Right now if you are a landowner in Wyoming the two market signals you get are pushing you toward wind and residential development,” Bob Budd, executive director of the Wyoming Wildlife and Natural Resource Trust, said in a news release. “If we want conservation, there has got to be a market signal for conservation.”

The USDA said the agreement will use programs such as the Conservation Reserve Program’s grasslands provisions, the Environmental Quality Incentives Program and the Agricultural Conservation Easements Program.