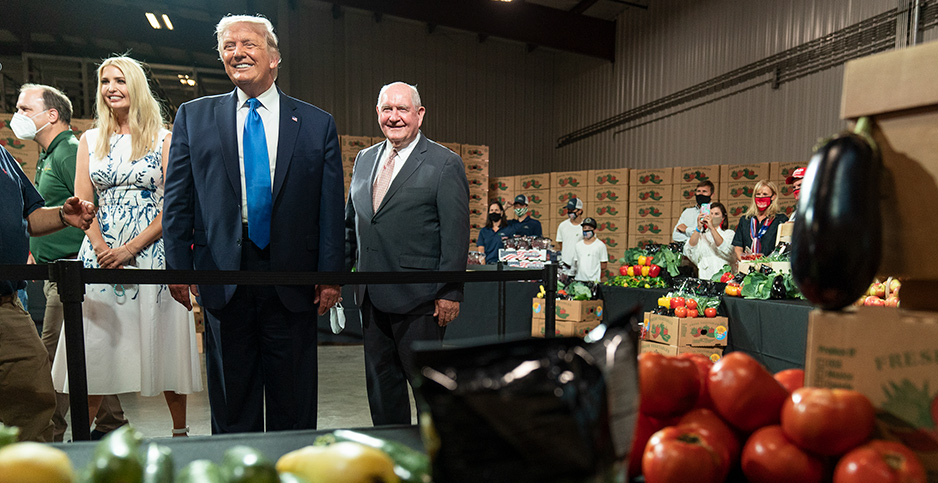 Agriculture Secretary Sonny Perdue, right, violated the Hatch Act when he delivered a speech for President Trump, center, during an Aug. 24 event in Mills River, N.C., pictured, according to the U.S. Office of Special Counsel. U.S. Department of Agriculture/Flickr

Agriculture Secretary Sonny Perdue violated a federal prohibition against politicking for candidates when he delivered a campaign-style speech for President Trump on an official visit to North Carolina in August, the U.S. Office of Special Counsel said.

In response to a complaint from Citizens for Responsibility and Ethics in Washington, the Office of Special Counsel yesterday said it agreed Perdue had violated the Hatch Act and ordered that the federal government be reimbursed for expenses related to the visit, where Trump was also present.

At issue are several remarks Perdue made in a speech to farmers and others regarding the Farmers to Families Food Box program, a Trump administration initiative to deliver food through charitable organizations.

Perdue talked about the program as an "outpouring of compassion" and said, "That’s what’s going to continue to happen — four more years — if America gets out and votes for this man, Donald J. Trump."

He also said: "Mr. President, as you saw those throngs of people lining both sides of the road from the airport all the way to Mills River here, those were a part of those forgotten people that voted for you for 2016. And I’ve got better news for you: They and many others are going to vote for you for four more years in 2020. Because they understand, under your administration, they’ve not been forgotten. And this [Farmers to Families Food Box program] is a great example of that."

Donald Sherman, deputy director of Citizens for Responsibility and Ethics in Washington, told E&E News today that Perdue’s actions stand out for brazenness in the Trump administration.

"This is perhaps the most flagrant violation by any Cabinet official," Sherman said. "This is exactly what the Hatch Act was meant to prevent."

The 1939 Hatch Act intends to prevent public officials from political campaign activities in their official capacities. The Clinton administration oversaw tweaks to the law, clarifying federal employees’ rights to engage in political activities on their own time and without federal resources.

USDA didn’t respond to a request for comment this morning. The Office of Special Counsel said the department defended Perdue, saying the secretary wasn’t making an endorsement but was predicting future behavior of voters.

In its response to the OSC, USDA said: "At no point did the Secretary encourage or direct the crowd to vote for the President. Instead, as noted, the Secretary’s statements described a prior occurrence and predicted future behavior based on the President’s focus on helping ‘forgotten people,’ ‘farmers who were suffering,’ ‘distributors who were suffering,’ and people who have ‘lost their jobs.’"

Perdue didn’t encourage attendees to vote for a candidate or party or advocate for a partisan political group, the department said.

But the OSC said the department’s defense only bolstered the case that Perdue had run afoul of the law, and it opened the possibility of disciplinary action if Perdue doesn’t find a way to reimburse the government.

USDA offered no legal basis for its argument, the OSC said.

"The justifications offered by USDA in Secretary Perdue’s defense only reinforce the conclusion that he violated the Hatch Act," the OSC said. "Indeed, it is hard to imagine a better example of campaign rhetoric than telling constituents what a candidate would do if elected."

The amount of money in question isn’t clear, but Sherman said it might be enough to exceed limits on campaign contributions, and thus Perdue couldn’t simply cover it personally as if it had been a campaign donation, for instance. Another possibility would be for the president’s campaign fund to reimburse the government — the same approach the Obama administration took when Secretary of Health and Human Services Kathleen Sebelius ran into Hatch Act trouble in 2012.

Trump hasn’t generally embraced the Hatch Act, however, Sherman said. And the president himself has been accused by critics of flouting the 1939 law on more than one occasion.

USDA employees were reminded earlier this year of the importance of the Hatch Act. The department’s general counsel, Stephen Vaden, and Office of Ethics Director Stuart Bender wrote a memo to "all USDA employees" on Jan. 23 to remind them of the restrictions.

"As federal employees, it is important that we all remember the applicable statutory restrictions on political activity imposed by the Hatch Act," the USDA officials said.

In addition, the USDA Office of Ethics has a "virtual ethics moment" posted on its website, reminding employees that the Hatch Act prohibits "any activity directed toward the success or failure of a political party or candidate for political office, or a partisan political group."

The video adds that the law "exists to ensure that the important work we do at USDA is free from political influence."