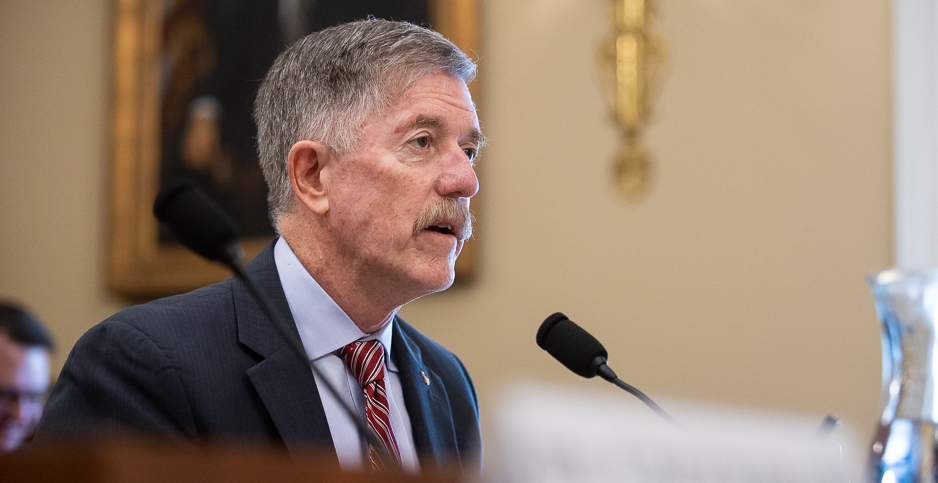 Former USGS Director James Reilly, who took charge about one-third of the way into President Trump’s term, says he found an agency needing reorganization and rejuvenation, as well as a more diverse leadership and scientific staff.

"One of our successes is that we significantly increased female participation in senior management; that’s a good thing," Reilly said in an interview. "That’s changing what needs to change in terms of culture."

More broadly, Reilly said that over his 31-month tenure, the agency "focused on moving into what we call 21st-century science, [as] some of our mission areas were doing very well and others not so much."

Critics, inside and outside the agency, see it differently. The Trump years were rocky for the science agency, they say, starting even before Reilly joined in April 2018.

Throughout the Trump era, scientists voiced pride in their work but doubts about the political leadership. At the end of Reilly’s tenure, The Washington Post reported he delayed release of a study about the effects of climate change and oil drilling on polar bears in the Arctic. Around the same time, a whistleblower retaliation complaint sounded alarms for Democrats in Congress (Greenwire, Oct. 30, 2020).

"The previous administration not only ignored the science, they abused and politicized the federal science enterprise and the experts that make it tick," former Interior Department scientist Joel Clement told E&E News, adding that USGS "is still pretty roughed up."

In 2016, the last year of the Obama administration, an Office of Personnel Management survey found 59% of USGS employees reacted positively and 16% reacted negatively to the statement "My organization’s senior leaders maintain high standards of honesty and integrity."

The responses to the same statement changed to 48% positive and 25% negative in the 2019 OPM survey, the most recent available.

That same year, 39% of USGS employees reacted negatively to the statement "In my organization, senior leaders generate high levels of motivation and commitment in the workforce."

"I think early on, [Reilly] made up his mind that USGS wasn’t being run right and wasn’t very effective," said Mark Sogge, a retired USGS Pacific Region director who left the agency within the past year. "And that set the tone."

Reilly said his focus was on "establishing data-driven, quality science."

‘Unbiased science to the decisionmakers’

The White House has not yet nominated a USGS director to replace Reilly, a former astronaut who earned a Ph.D. with a 1995 doctoral dissertation titled "Geologic Controls on the Distribution of Chemosynthetic Organisms in the Gulf of Mexico" (Greenwire, March 6, 2018).

"It’s an independent organization that’s intended to deliver unbiased science to the decisionmakers," Reilly said about the agency he would lead at his March 2018 confirmation hearing, "and that will be one of the highest priorities that I’ll have as the director."

Handily confirmed by the Senate on a voice vote, the former engineering duty lieutenant commander in the Navy said he worked hard to help USGS manage huge data flows and pushed to "put tactical control and authority for operations with the regional directors."

"And so we had very clean, very effective management teams at the very top, and it moved all the way down very efficiently and effectively to everybody," Reilly added.

Some at the agency found him aloof.

"I never met him face to face," recounted retired USGS public affairs officer Heather Dewar, but from "information that was relayed to me, I would say that his management style was rather defensive and not very quick to respond to the needs of his subordinates."

Sogge recounted a recurring frustration that business management didn’t improve over the Trump period, with outgoing grants and contracts held up while awaiting scrutiny and approval.

"This had very real impacts on projects and collaborators, to our students and faculty that are being paid this money," he said.

In the fall of 2020, the Office of Inspector General determined that Reilly violated the federal whistleblower protection law by reassigning a subordinate who filed a complaint against him. The IG’s report didn’t detail the circumstances of the complaint but found that Reilly did retaliate against the employee. In response, Interior’s then-spokesperson Nicholas Goodwin said in a statement that "the Inspector General’s report is wrong in its legal and factual conclusions" (E&E News PM, Oct. 29, 2020).

"There is an element of filing complaints where it’s a death by 1,000 cuts," Reilly told investigators, according to a report summary. "It can be weaponized."

At a 2019 House Appropriations Committee hearing, Reilly said that "as demands for energy and mineral resources grow, the USGS research and assessments become increasingly critical for understanding the occurrence, quality, supply and use of national and global resources."

There were other topics, Dewar said, "that were not that interesting to him, that he was not particularly supportive of promoting."

"Among those topics, it seemed clear from his actions, … was research on the effects of climate change," she said.

Climate change seemed to drop from USGS press releases, an E&E News review in 2019 found. For example, a press release about a USGS study on the financial impact of warming on California — which estimated there could be more than $100 billion in real estate damages along the state’s coastline by 2100 related to sea-level rise — omitted those key details. Instead, the agency synopsis of the work focused on the technical aspects of the report’s methodology (Climatewire, July 8, 2019).

Last fall, The Washington Post reported that USGS for months delayed release of a study on polar bears that found increased oil drilling threatened denning polar bear mothers in Alaska, a potentially critical finding as the Interior Department weighed the Willow oil project in the northeastern part of the National Petroleum Reserve-Alaska. When the report was made public, Reilly acknowledged he held it up, saying he needed to be sure the science was sound.

At the same time, the perceived bent about climate change of Trump administration officials, and the impact that had at USGS, preceded Reilly’s April 2018 arrival at the agency of some 7,900 employees.

A February and March 2018 survey by the Union of Concerned Scientists and Iowa State University’s Center for Survey Statistics and Methodology found that 32% of responding USGS scientists said they avoided using "climate change" — without explicit orders — to avoid problems.

And 22% of the USGS respondents reported, with Reilly not yet on the scene, that they had been asked or told not to work on specific topics that are viewed as politically contentious (Greenwire, Aug. 14, 2018).

Clement, the former Interior employee who is now senior fellow with the Union of Concerned Scientists’ Center for Science and Democracy, said he saw Reilly as part of the problem.

"Because of his science background, we hoped that Jim Reilly would stand up for science," Clement said, "but he … caved to the ideologues in the White House by trying to undermine the science of climate modeling. He was quite a disappointment in that role."

Reilly countered that "there was not a single occasion where I received any direction, one way or the other, from the White House. I got little or no direction on climate from anyone."

He further stated that "when it gets to be a political question, you have people that will be on both sides, and both of them are going to be frustrated, and particularly as you come in the middle, where I was trying to maintain a position" as to climate change.

"The issue here in many ways is that it’s easy to interpret a focus on rigorous science, especially coming from the director who’s politically appointed by the president, as having a political motivation," Reilly said. "My whole objective was never political … but we need data to drive conclusions."

Reilly has added that he’s maintained an appropriate scientific focus on issues like climate modeling, a matter now under Biden administration review.

"Predicting short-term, global climate changes, which are significantly more complex than forecasting hurricanes because there are fewer variables to assess … is far more certain than making long-term projections," Reilly wrote in a December 2020 Wall Street Journal op-ed. "The science is limited in forecasting a narrow range of plausible climate outcomes past the next two to three decades."

Scientists and lawmakers believed the Trump administration’s budget priorities would have shortchanged USGS.

The Trump administration’s budget requests repeatedly proposed large cuts to the agency’s eight regional Climate Adaptation Science Centers, a program established by Congress in 2008 and expanded by the Obama administration in 2009.

"When you look at it in terms of the deficits that were being racked up every year, the president’s budget was trying to address that," Reilly said, adding that, "interestingly, the cuts that we were looking at … were actually smaller than average" compared with other federal agencies.

Congress, in any event, shrugged off the proposed cuts. For its part, the Biden administration’s fiscal 2022 budget request says it "increases support for science at the U.S. Geological Survey and other bureaus by investing an additional $200 million to provide information about the impacts of climate change and how best to implement mitigation, adaptation, and resilience efforts."

"We are putting the evaluation and decision-making authority regarding scientific information back where it should be, in the hands of the scientists," Interior Principal Deputy Assistant Secretary for Water and Science Tanya Trujillo said in a statement.

Reilly says he played it straight, while he acknowledged learning some hard lessons.

"I would have loved to avoid the politics," Reilly said. "The weapons that get employed in political warfare were just something different than I’ve ever experienced, and so that was something I certainly didn’t appreciate."

But then, Reilly ticks off the rewards he found getting out into the field, meeting tech-savvy younger researchers, advancing 21st-century science initiatives and reorganizing an agency founded in 1879. In sum, he says, he wanted to leave USGS a better place.

"So that’s the only objective I really had," Reilly said. "I didn’t want to screw it up."