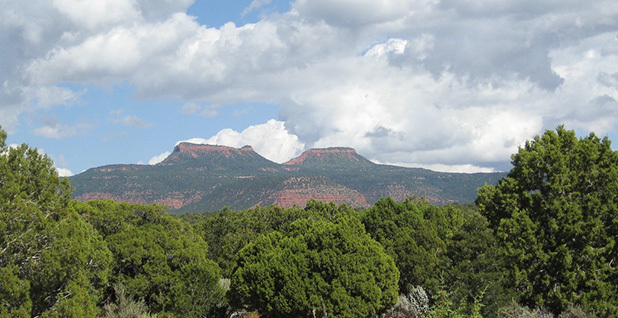 Utah Gov. Gary Herbert (R) yesterday called for a May 18 special session of the state’s Legislature to pass a resolution opposing President Obama’s potential use of the Antiquities Act to designate a 1.9-million-acre national monument in southeast Utah known as Bears Ears.

Herbert’s announcement came one day after Interior Secretary Sally Jewell said in a speech in Washington, D.C., that she will visit Utah, where there are "a range of conservation proposals — legislative and otherwise" — to protect public lands.

For some American Indians and conservationists, that was code for Bears Ears, a region in San Juan County bordering Navajo Nation that’s rich in Native American historic and cultural sites, juniper-speckled mesas, and winding canyons.

An Interior spokeswoman said no sites have been confirmed for Jewell’s visit but that it will likely happen in the summer.

Herbert and the Utah congressional delegation oppose Obama protecting the area under the Antiquities Act, arguing it would give local residents too little sway in how the lands would be managed. House Natural Resources Chairman Rob Bishop (R-Utah) and Rep. Jason Chaffetz (R-Utah) are pushing legislation that would designate a 1.1-million-acre Bears Ears National Conservation Area, a proposal Chaffetz in February described as a "middle ground" between what the county and environmentalists want.

"It is absolutely irresponsible for the Obama administration to consider a new national monument that is over two and a half times the size of Rhode Island without input from Utahns from across the state who will be significantly impacted by this decision," Herbert said in a statement yesterday. "I have stated repeatedly that I oppose such a declaration. Today, I am asking every member of the Utah state Legislature to go on record and join me in expressing our opposition to another unilateral national monument within the state."

While such a resolution should easily pass, it won’t have any legal force. The lands eyed for protection at Bears Ears are federally owned and managed primarily by the Bureau of Land Management.

Herbert said a similar resolution was passed by the Utah House during the most recent legislative session but was not taken up in the state Senate.

Jewell on Tuesday told Greenwire she’s spoken to members of the Utah delegation about areas they believe should be protected and developed, calling the issue "an ongoing conversation."

In her prepared remarks, she called the Antiquities Act "one of the most important tools a president has to improve our country."

"I do not think the act should only be used in places where there is complete agreement, as some are suggesting," she said.

The Bears Ears Inter-Tribal Coalition, a partnership of the Hopi, Navajo, Uintah and Ouray Ute, Ute Mountain Ute and Zuni governments pushing for the monument, said it was encouraged by Jewell’s decision to visit Utah.

All of the landscape-scale national monuments designated under the Obama administration have been preceded by a visit from a high-level Interior or Agriculture department official. Jewell’s visit — particularly if she decides to see or discuss Bears Ears — might hint at the administration’s intentions.

"It is not possible to fully appreciate the importance of the Bears Ears region to Native Americans without seeing the sites that our ancestors walked, talking with tribal members about their connections to the land and wildlife, and experiencing the beauty of the region firsthand," said Regina Lopez-Whiteskunk, councilwoman of Ute Mountain Ute Tribe and co-chair of the coalition. "We are excited that Secretary Jewell will be able to experience the Bears Ears cultural landscape."

The proposal carries the support of several tribal governments including the Navajo Nation and Ute Mountain Ute. The National Congress of American Indians endorsed it last September.

Herbert said he will hold Obama administration officials to their word to "engage directly with Utah’s elected officials and the general public on any proposed national monument in the state of Utah."