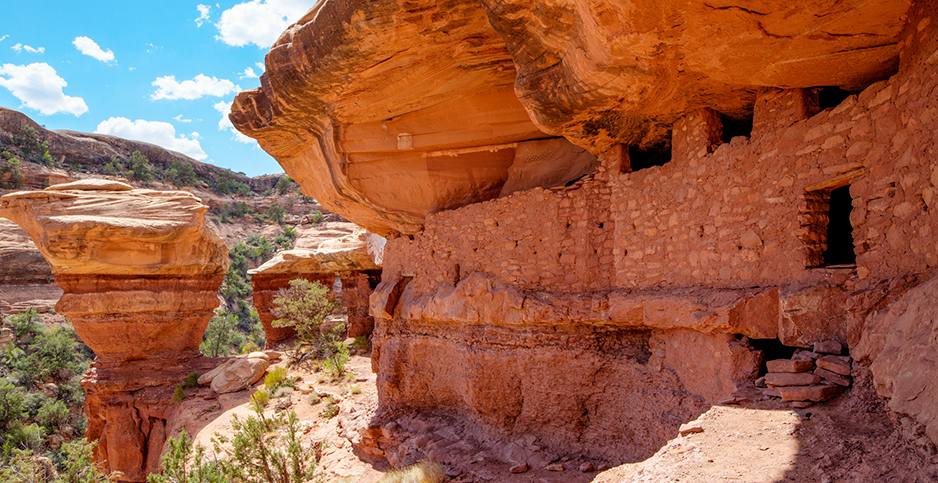 While widely expected, the recommendation is coming at a pivotal moment for an administration looking to make inroads with Republicans on Capitol Hill, from negotiating a bipartisan infrastructure package to neutralizing senators who could complicate the smooth confirmation of agency nominees.

At stake are the Bears Ears and Grand Staircase-Escalante national monuments, both of which sit in the Beehive State. Former President Trump shrank Bears Ears from 1.35 million acres to about 202,000 acres, while also reducing the Grand Staircase-Escalante National Monument to about half of its former 1.9-million-acre footprint. The Trump administration also removed some protections from the Northeast Canyons and Seamounts Marine National Monument, the first marine monument in the Atlantic Ocean.

Biden took early steps to potentially undo the reductions, ordering a 60-day review of the Trump moves. That timeline was extended to allow for Haaland’s visit to the sites earlier this year — the fulfillment of a promise she made to Utah Republican Sen. Mike Lee during her confirmation hearing before the Senate Energy and Natural Resources Committee.

News now that Haaland wants Biden to use his executive authority to move forward with reversing Trump’s actions, first reported by The Washington Post and confirmed to E&E News by a source familiar with the discussions, has Utah lawmakers pressing for a meeting with the president prior to him taking action.

"We reiterate our request that the president publicly release the Secretary’s report recommendations and meet with our delegation before making a final decision on the monuments’ boundaries," said Lee and fellow Sen. Mitt Romney, along with Reps. John Curtis, Chris Stewart and Burgess Owens.

"We also urge the administration to work with our delegation, as well as with state, local, and tribal leaders, to craft a permanent, legislative solution, which we believe is the only path to resolving this longstanding issue and providing much-needed certainty to our communities," the lawmakers continued.

Utah’s Republican Gov. Spencer Cox said in a statement he was "disappointed by this recommendation."

"I think there’s a better way, and I look forward to talking with the president about how to find a lasting solution that’s better for the land and everyone involved," he said.

Both a Cox spokesperson and Romney in a brief interview with E&E News on Capitol Hill this morning said they were only responding to news reports about the recommendation and had not seen a physical copy of the report or corresponded with administration officials about its plans.

An Interior Department spokesperson declined to weigh in, and the White House did not reply to requests for comment.

"I’m just reading reports. I have not spoken with the secretary or the White House," Romney said, adding that during Haaland’s trip to Bears Ears and Grand Staircase-Escalante, she didn’t tip her hand about what the recommendation would be.

But Romney added he was "not surprised" by the developments: Despite Haaland’s promise to be neutral on the matter as Interior secretary, as a New Mexico Democratic congresswoman she co-sponsored legislation that would have restored and expanded Bears Ears. Similarly, Biden during the campaign pledged to restore the original boundaries of the monuments.

Asked what Congress could do to counteract the president’s expected actions codifying Haaland’s recommendations, Romney said there was a "long list of options that we have, and we’ll continue to promote giving more authority back to states and localities in the designation of sites."

Romney would not say whether these developments could complicate his relationship with the administration, though they come at a time when the White House cannot afford to alienate a potential ally in infrastructure talks.

The White House has already shown an appetite for making concessions in order to win over Republican partners in an evenly divided Senate. The administration most recently agreed to defend a controversial ConocoPhillips Co. exploration project in the Arctic, a move celebrated by sought-after swing vote Sen. Lisa Murkowski (R-Alaska). Democrats and environmental advocates publicly raged about the move.

While Lee would not elaborate on his thinking to E&E News on Capitol Hill earlier today, he has already established himself as a lawmaker willing to place holds on nominees and pending legislation in protest over administration policies he doesn’t like.

The latest move on Bears Ears and Grand Staircase-Escalante could harden this resolve, particularly as the Senate prepares to move forward on two Interior nominees: Tommy Beaudreau to be deputy Interior secretary and Tracy Stone-Manning to lead the Bureau of Land Management.

Lee has also said in the past that Western Republican support for the administration’s plans to conserve 30% of all U.S. lands and waters by 2030 could hinge on Biden’s willingness to promise certain states they would be exempted from the Antiquities Act, which presidents can invoke unilaterally to create new national monuments (Greenwire, March 26).

But while Biden contends with disgruntled Republicans, he is fielding praise from Democrats and other green allies urging him to follow through on Haaland’s recommendations, which were first submitted to the Oval Office earlier this month (Greenwire, June 4).

The Bears Ears Inter-Tribal Coalition, which played a significant role in establishing the monuments under the Obama administration in 2016, has been watching the situation closely. Last month, it launched a six-figure ad campaign imploring the White House to restore the monuments or expand them.

Heidi McIntosh, an attorney with Earthjustice, urged Biden in a statement provided to E&E News today to "heed" advice for restoration and "undo the damage" wrought by the former president.

"The last administration acted unlawfully when it shrank the boundaries of Bears Ears and Grand Staircase-Escalante National Monuments, home to thousands of sacred Tribal cultural sites, and of Northeast Canyons and Seamounts, which serves as refuge for countless marine species," she said.

"We welcome this news after years of litigation aimed at restoring much needed protections for these lands and waters," agreed Dan Hartinger, the government relations director for the Wilderness Society. "Secretary Haaland received input from near and far about the importance of restoring these monuments, and there is no doubt she heard overwhelming support that led to her recommendations.

"The president now has all of the information at hand," Hartinger continued, "accompanied by decades of community and tribal input on the need for greater protections, so we are counting on him to follow the science and the facts. He should use the power vested in him under the Antiquities Act to restore protections without delay."

The White House’s primary concern is withstanding likely legal challenges in the interim before it releases the report publicly, sources familiar with the decision said. As with the Utah sites, this also applies to Haaland’s recommendation to restore the Northeast Canyons and Seamounts Marine National Monument, where Trump opened protected waters to commercial fishing via proclamation last year, arguing that the marine protections had damaged the industry.

President Obama had designated the area, roughly the size of the state of Connecticut, with protections in 2016 due to its unique features. Those include three massive canyons beneath the seafloor and four underwater mountains, one rising more than 8,000 feet from the ocean floor.

Mark Squillace, an expert in federal law at the University of Colorado Law School, said the big question now isn’t whether the Biden administration seeks to restore these monuments in some fashion, but how.

"They might simply declare, perhaps backed up with a legal opinion, that the Trump Proclamations were not valid because the President lacks the authority to downsize monuments created by a predecessor," Squillace said in an email.

That’s the argument that’s been made in ongoing litigation brought by conservation and tribal conservation groups.

Squillace described it like this: "The Antiquities Act only authorizes the president to ‘reserve’ monuments; it does not allow the President to downsize or rescind monuments designated by predecessors as is expressly allowed for other types of withdrawals under legislation that is roughly contemporaneous with the AA."

Some presidents have walked back designations, but those actions weren’t challenged in court, he said.

In March, Supreme Court Chief Justice John Roberts fortified critiques of massive monument designations by implying the Antiquities Act has been taken well out of its original context.

The court declined at the time to hear arguments on whether Obama’s designation of the Seamounts monument off the coast of New England was lawful, but left the door open for similar critiques in the future (Greenwire, March 24).