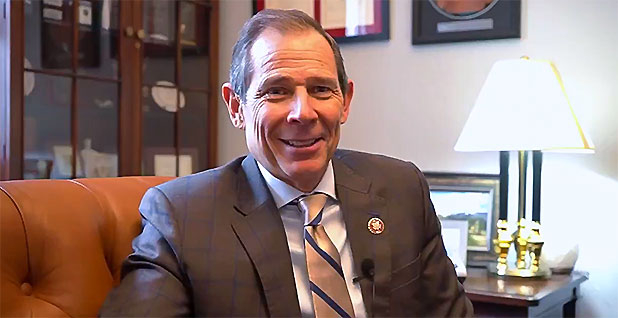 Rep. John Curtis (R-Utah) during one of his regular climate chats. @RepJohnCurtis/Twitter

"Just even talking about the environment causes stress," Curtis said in a Feb. 5 Twitter video — the second post in a new series the sophomore lawmaker launched in late January dubbed #CurtisClimateChat.

Even his wife, Sue, is skeptical of the wisdom of broaching such a weaponized political topic.

Curtis said in the Feb. 5 post that Sue told him he "can’t keep talking about the climate" because he sounds like he’s "in league with AOC."

But the affable Curtis, a former mayor of Provo, Utah, is imploring his Republican friends to "hang in there" and hear him out on the issue.

"The climate is changing, we know that," he said in the video. "And it’s not a far stretch to say decades and decades and decades of the Industrial Revolution has had some impact on our climate. That’s as far as you need to go if you are uncomfortable with this thing."

Curtis has a message for Democrats, as well.

"Please stop using this as a litmus test," he said, referring to the "divisive" question: "Do you believe in climate change, and do you believe man is influencing it?"

He’d rather start the debate with this question: "Do we want to leave the Earth better than we found it? I think we are all in league on that. Now, what do we do about it?"

Curtis, a member of the Natural Resources Committee, told E&E News recently that since he came to Congress in 2017, he has been trying to figure out how to be "a thoughtful voice" on many issues, including climate and the environment.

The 59-year-old is fond of communicating with his constituents through social media and town halls. So, during the impeachment proceedings against President Trump, he started a weekly brief video on Twitter explaining the process.

"We spend a disproportionate amount of time over this in my office," he said. "Talking about how we move forward, what do we get behind, what are the answers, and how do we move the country forward in a bipartisan way on an issue that is, unfortunately, partisan?"

He said his constituents "struggle, quite frankly," with the topic of climate change and human influence over it.

“Republicans shouldn’t be afraid of this issue.”

As Provo mayor, Curtis focused on environmental initiatives, including better air quality in the Beehive State. When he first arrived in Washington, he said he could "absolutely" see himself teaming up with Democrats on clean air policy.

Curtis himself is a former Democrat. His voting record since coming to Congress has been that of a traditional Republican, but he still retains a bit of an independent political bent.

He was one of just five Republicans who voted yesterday for a Democratic-sponsored joint resolution to remove the deadline for the ratification of the Equal Rights Amendment. Earlier this month, he introduced legislation with Democratic Reps. Peter Welch of Vermont and Angie Craig of Minnesota to increase funding for the recreational trails program.

As for the Twitter chats, Curtis said they have been "super well-received" so far. His first climate chat post had more than 6,200 views as of yesterday. His third video, which focused on individual responsibility in caring for the environment, had 500 views as of midafternoon yesterday.

"I am really optimistic that there are tons of common ground" between Democrats and Republicans on protecting the environment and climate, he said. "I think that it’s going to take some work to plow through some of the things that are keeping us apart. And I think that Republicans shouldn’t be afraid of this issue."