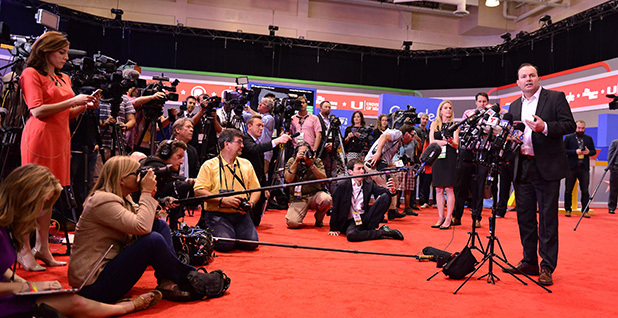 For nearly a month, Lee has been the lone Republican blocking the Senate from taking up a bipartisan $220 million aid package for Flint, Mich., and other cities with contaminated drinking water. His opposition has also stalled a broader energy overhaul bill that was expected to move in tandem with the aid.

Sen. Debbie Stabenow (D-Mich.), who has been one of the lead negotiators on the Flint package, is not hiding her growing frustration with Lee’s resistance.

"This has got to stop," she said on the Senate floor recently. "We are at a point where we need to have a vote to stop the ability of one person to be able to just hold things up."

Even some Republicans privately say it would better to allow the Flint measure to move rather than have Democrats continue to portray them as ignoring a public health crisis.

Lee shrugs off the criticism, saying he’ll drop his opposition once the new spending is fully offset by cuts elsewhere in the federal budget.

He also says U.S. EPA, which he blames for poor water monitoring in Flint, has a liability fund for paying out judgments against the agency that could be tapped for the aid rather than approving new spending.

"Anytime something awful has happened, it’s not necessarily an easy thing to urge caution. Yet I still think caution is in order lest we create a massive new type of federal program that’s going be difficult to contain," Lee said.

The skepticism is not new for the first-term senator and tea party conservative who’s known for taking on sometimes unpopular and complex policy issues.

Lee’s opposition to Flint aid is the latest extension of his small government philosophy that seeks to question the need for the federal government at every turn. His view is rooted in a strain of Western libertarianism popular among many of the ranchers and landowners in the state he represents. It’s the belief that the less government does, the better off most Americans will be.

"I have my own strong opinions about what the role of the federal government is. They don’t necessarily align with where a lot of people who are part of the Washington political establishment have traditionally been," Lee said.

A member of the Senate Energy and Natural Resources Committee, Lee increasingly has been outspoken on public lands issues. He has pushed proposals that would weaken the president’s ability to designate federal lands as national monuments under the 1906 Antiquities Act.

"In some cases, it has been used in a way that I would consider excessive," said Lee, who points to the 1996 move by President Clinton to designate 1.5 million acres in southern Utah as the Grand Staircase-Escalante National Monument as an overreach. He said the administration never consulted the state on the decision, which has been a rallying point for Western landowners ever since.

Lee’s most worried about a push by American Indian groups to have 1.9 million acres in southeastern Utah declared Bears Ears National Monument to protect tribal treasures. Earlier this year, he sought to add an amendment to energy legislation that would have stopped designations unless they first got congressional or state approval, but the plan fell short with no Democratic support.

His effort was opposed by more than 100 conservation groups, the NAACP and tribal groups, all of whom cited public polls showing most Americans favor preservation of public lands.

Nonetheless, the Utah senator said he’s looking for other places to attach versions of the amendment, including annual spending bills. He also says he has raised his concerns about Bears Ears with Interior Secretary Sally Jewell, who has told him the administration would move "cautiously and responsibly" on any designations.

"This is the natural consequence of the federal government owning a whole lot of land in the western United States and managing that land in a way that very often is in conflict with the needs of the local economy and the needs of average, everyday Americans who are trying to earn a living," said Lee.

Still, Lee said, the approach the protesters took in Oregon, which led to one death and a slew of federal charges for the occupiers, is "not one that I would advocate." He added he expects congressional hearings on the Oregon standoff.

Lee, who is also a member of the Judiciary Committee and has been pushing for criminal sentencing reforms, said he does not expect crimes on federal lands to be part of his current proposal for sentencing legislation. The standoff was sparked over what some landowners say were unfair sentences for ranchers who burned federal lands.

"There is a good case we need to look at [land crimes] as part of any future [reform] effort," he added.

Lee, 44, rode a tea party wave of resentment toward federal government bailouts and Obamacare to the Senate in 2010.

He shocked the GOP establishment by besting three-term Republican Sen. Robert Bennett in a caucus and then edging out a party-backed businessman in a primary runoff. In Republican-dominated Utah, winning the GOP nomination is tantamount to being elected.

Despite all the outsider talk, Lee himself is no stranger to Washington, D.C., and has connections to both political parties. He spent a chunk of his childhood living in McLean, Va., and watching his father, Rex Lee, argue cases before the Supreme Court as President Reagan’s solicitor general.

His family’s neighbors included Sen. Robert Byrd (D-W.Va.), and he attended school with the daughter of Sen. Strom Thurmond (R-S.C.). Lee’s "home teacher," who was responsible for visiting the family’s home to serve as a sort of spiritual guide in the Mormon faith, was then-Rep. Harry Reid of Nevada.

"I’ve known a lot of Democrats, and I like Harry Reid, and I consider him a friend. Harry and I get along great when we are not talking about politics," said Lee.

At 14, Lee moved back to Utah and attended Brigham Young University and its law school. His father served as president of BYU, while the younger Lee was the student body president.

After law school, Lee was a law clerk, including doing two stints with Supreme Court Justice Samuel Alito, before and after he was on the high court. He also worked as general counsel for then-Utah Gov. Jon Huntsman (R). And he spent time at private law firms in Washington and Utah before getting into the Senate race.

Lee early on aligned himself with other tea party arrivals, including Sens. Ted Cruz of Texas and Rand Paul of Kentucky. He would later become the first senator to endorse Cruz’s presidential campaign.

Along with Cruz, Lee was one of the architects of the failed GOP effort to shut down the government in 2014 to defund Obamacare. He also was the first senator to come to the floor to support Paul’s 13-hour filibuster to protest the potential domestic use of unmanned drones by the Obama administration.

"Lee came in and was planning to be a senator; the other guys came and were planning to run for president," said Norquist. "He has taken equally radical positions, it’s just that rather than putting them out as markers, he’s said, ‘These are things I am doing.’"

For example, Lee is spearheading an effort among House and Senate conservatives, called the Article I Project, for the section of the Constitution that spells out the role of Congress. It seeks to restore power to the legislative branch that many on the right fear has shifted to the executive branch and federal courts.

While some legislative proposals are pending, Article I is a long-term effort that does not make an easy campaign talking point.

Lee also serves as chairman of the Senate Steering Committee, a caucus of the chamber’s conservatives who meet every Wednesday for lunch. More than half the GOP senators regularly drop by for the sessions, which are often seen as an incubator for conservative ideas like the Article I project.

Asked about Lee, Sen. John McCain (R-Ariz.), who has sometimes clashed with the tea party, noted the "excellent work" Lee has done leading the Steering Committee. "I know he has a conservative philosophy, but he’s willing to discuss, debate and work with his colleagues," McCain added.

Reid, who now calls his onetime Mormon charge a friend, said Lee has always been "very, very conservative." But in a compliment of sorts, the Senate Democratic leader said, "You don’t have to guess where he stands."

Environmental and conservation groups have been highly critical of Lee’s efforts to loosen the Antiquities Act.

The League of Conservation Voters, for example, gives him a low 10 percent lifetime rating for his Senate voting record.

Athan Manuel, the Sierra Club’s director of lands conservation, says "few people in the Senate have been as committed to doing the dirty work for fossil fuel as Mike Lee," citing his opposition to the Antiquities Act.

According to the Center for Responsive Politics, the oil and gas industry is among the top five donors to Lee since he was elected. He has raised $153,000 from those interests.

Business groups, like the U.S. Chamber of Commerce, have also been strong supporters of Lee’s efforts, saying monument designations deprive states of billions of dollars by keeping them from tapping their land’s natural resources.

Lynn Jackson, a County Council member in Grand County, Utah, said Lee’s views on federal lands are largely in line with the mostly Republican and rural state, where the federal government controls about three-quarters, or 45 million acres, of all land.

Lee is up for re-election in November and is not expected to face significant opposition, despite approval numbers that have hovered at barely 50 percent.

Tim Chambless, a political science associate professor and lecturer at the University of Utah’s Hinckley Institute of Politics, said Lee’s lower-than-expected approval numbers reflect lingering frustration over the government shutdown that forced the state to spend millions to keep parks open to tourists.

But, he said, potential challenges from Josh Romney, the son of Mitt Romney, and his former boss, Huntsman, never materialized, and former Democratic Rep. Jim Matheson, who retired in 2015, also passed on the race. They saw in 2010 that Lee has a strong base of supporters.

"The tea party wing of the Republican Party is comfortable with him on a lot of issues," Chambless said.