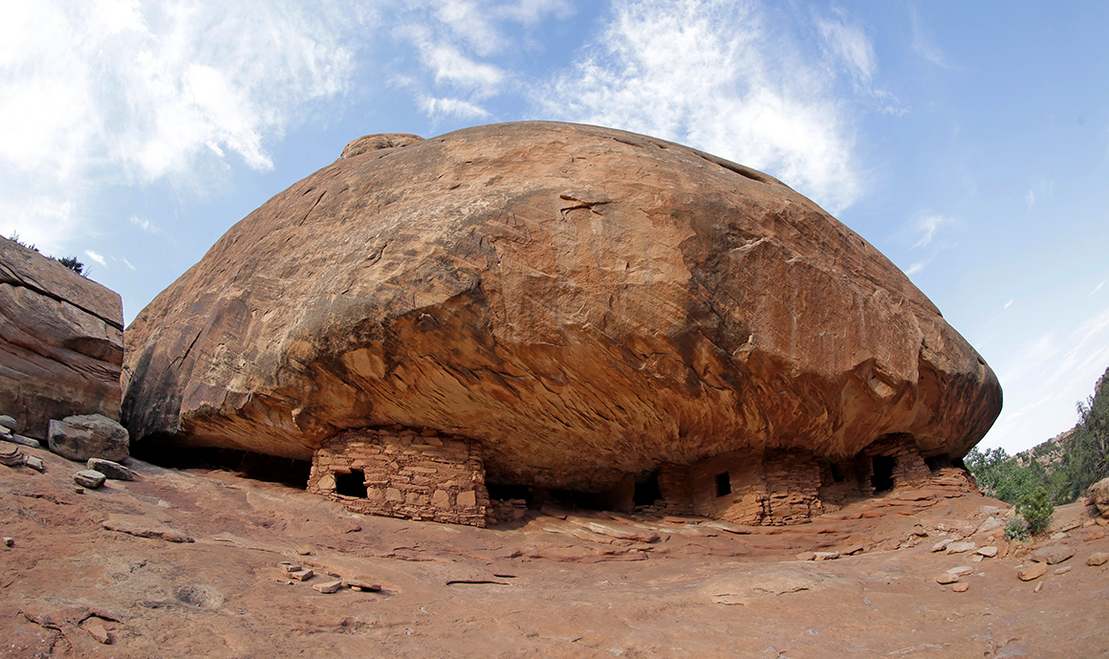 The "House on Fire" ruins in Mule Canyon, which is part of Bears Ears National Monument, near Blanding, Utah. Rick Bowmer/AP Photo

Utah Attorney General Sean Reyes (R) announced that the firm, Consovoy McCarthy, based in Boston and Washington, won a contract "to assist with research and analysis about potential litigation" challenging the Bears Ears and Grand Staircase-Escalante national monuments (Greenwire, Oct. 22).

State officials raised the specter of a court challenge ahead of Biden’s decision in October to restore more than 2 million acres of public lands to both sites.

Former President Trump had excised those lands from the monuments in late 2017 at the behest of Utah and federal officials who have long characterized their designation as the epitome of government overreach.

"Two months ago, President Biden ignored the views of Utah’s state and local leaders and unilaterally expanded the boundaries of both the Bears Ears and Grand Staircase-Escalante National Monuments," Reyes said in a statement. "As Utahns know better than anyone, these magnificent lands deserve appropriate long-term protections. Unfortunately, President Biden has undermined that goal. His actions create more uncertainty and prolong the political tug-of-war over Utah’s public lands."

Although Utah’s all-Republican congressional delegation and its state government, led by Gov. Spencer Cox (R), have opposed large-scale national monuments, local officials including the county commission in San Juan — where the Bears Ears site is located — have endorsed the restoration (Greenwire, March 20, 2019).

While federal courts have long sided with the White House over challenges to national monuments — Congress granted presidents authority to set aside federal lands as monuments to protect areas of cultural, historic or scientific interest under the Antiquities Act of 1906 — Reyes said Utah officials see a new avenue for their fight.

He pointed to Supreme Court Chief Justice John Roberts’ comments earlier this year in which he openly urged opponents of large-scale monuments to bring new challenges while questioning whether presidents have abused a provision that requires such sites to be the "smallest area" needed to care for the objects being protected.

"Somewhere along the line, however, this restriction has ceased to pose any meaningful restraint," Roberts wrote (Greenwire, March 24).

"Recent opinions from members of the U.S. Supreme Court strongly indicate that President Biden’s use of the Antiquities Act is the wrong way to protect such vast areas of southern Utah," Reyes said yesterday. "We continue to urge Congress to work with the State, with local governments, and with Tribal nations on a long-term legislative solution for the conservation of these lands that would end the existing uncertainty and avoid a potentially acrimonious legal challenge."

But Native American Rights Fund staff attorney Matthew Campbell pushed back against the anticipated lawsuit, telling E&E News, "The law is clear that the president has broad authority to create national monuments to protect objects of historic and scientific interest, and Bears Ears easily falls under the Antiquities Act’s scope."

He added, "President Biden restored Bears Ears to conserve a multitude of sites that are culturally and spiritually important to tribal nations — including petroglyphs, pictographs, cultural sites, dwellings, and areas used for traditional rituals, gatherings and tribal practices — as well as paleontological objects, landscape features, historic objects, and plant and animal species."

Steve Bloch, legal director for Southern Utah Wilderness Alliance, has also criticized the state for readying for a new legal challenge that could cost the state millions of dollars. A statement issued by Utah’s attorney general’s office shows Consovoy McCarthy will charge a "blended rate" of $498 per hour.

"We’re disappointed but not surprised that the state would award this contract and continue its drive toward challenging restoration of the monuments," Bloch said.

"The decision to restore the monuments was hugely popular in Utah and across the country. It’s terribly unfortunate that Utah would use taxpayer money to work to undo those efforts rather than focus on the stewardship and conservation of what everyone agrees are culturally significant and irreplaceable objects."