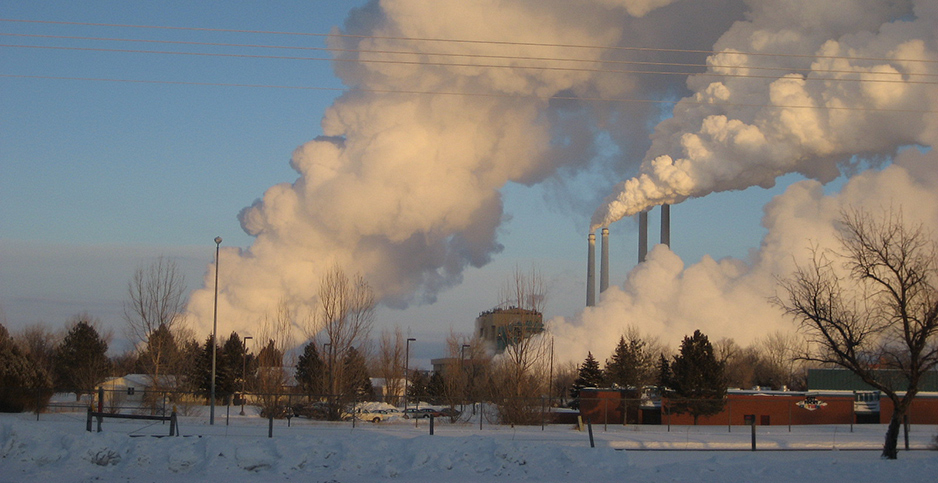 A controversial Montana law would extend the life of the Colstrip power plant, one of the nation's biggest emitters of carbon dioxide. Rachel Cernansky/spotreporting/Flickr

For decades, electricity generated at a gargantuan coal plant on the Montana plains was shipped west to the growing metropolises of Portland, Ore., and Seattle. Now, the long-standing trade is on the brink of collapse.

The breakdown was caused by a growing cultural divide on energy issues. Lawmakers in Oregon and Washington want to cut the cord on coal as part of a wider attempt to green their power supplies and reduce greenhouse gas emissions. Montana legislators are eager to save the carbon-intense plant and the jobs and tax revenues that come with it.

At the center of the fight is Colstrip, a 1,480-megawatt coal plant that ranks among the biggest greenhouse gas emitters in America. Only eight power plants emitted more carbon dioxide in the last decade, according to an E&E News review of EPA data.

Six power companies own a stake in the plant. Four of those are based in Oregon and Washington, where legislators have passed laws requiring utilities to exit the plant. The sole Montana utility is pushing to keep it open.

Tensions among the power companies and their states have been mounting for years. Two recently enacted Montana laws now threaten to push both sides to the brink.

One of the laws requires any legal disputes to be decided in Montana courts. The other law enables the state to impose a daily fine of $100,000 on Colstrip owners who fail to pay their share of maintenance costs or move to close the plant without obtaining the consent of all six companies.

Proponents say the laws will ensure Pacific power companies invest in maintenance and keep the plant open. Critics say the move amounts to a legislative attempt to rewrite the long-standing contract governing Colstrip and risks damaging business investment in the state.

The tweet received an icy reception in Washington state, where legislators passed a law in 2019 to ban imported coal-fired electricity by 2025. A spokesman for Washington Gov. Jay Inslee (D) said the laws "won’t stand up in court" and will "only make it harder for Montana to prepare for a healthy low-carbon future."

"Washington utilities are moving away from coal, despite attempts to keep the aging plants running," the spokesman said.

The suit comes as the parties are locked in arbitration over the rules for closing Colstrip and covering maintenance costs. The suit argues that NorthWestern and Talen effectively sought an upper hand in those negotiations by supporting a law that reopens the ownership and operation agreement covering the plant.

The agreement calls for arbitration to be held in Spokane, Wash. One of the Montana laws, stemming from S.B. 265, requires legal disputes to be handled in Montana courts and invalidates agreements decided outside the state. Montana’s Constitution contains a provision prohibiting the Legislature from passing any law impeding an existing contract.

"It is very likely that a court will rule that reaching into a contract, like the Legislature did, is unconstitutional. In fact this legal principle has often been cited as one of the reasons, maybe the main reason, why American business has flourished the way it did over the past couple of centuries," said Chuck McGraw, a Montana-based lawyer whose clients include the Natural Resources Defense Council.

"The great concern here is that there is a train wreck and that Colstrip is forced to close abruptly, without planning, without protecting the community," he added. "The spate of litigation between the owners that we’re seeing now is not exactly an encouraging sign that the owners can figure out how to rationally plan for the retirement of Colstrip."

Colstrip was a four-unit coal plant. Its first two boilers opened in the 1970s. Those units closed early in 2020 as part of a legal settlement with environmentalists. The two remaining units were built in the 1980s and are far larger. They had been scheduled to run into the 2040s.

But some of the plant’s owners have started to contemplate closing the plant early. Avista, which also serves customers in Idaho, has acknowledged that its economic modeling shows the plant should close by 2025, Idaho regulators said last year.

"It’s unfortunate that the bills in question, Senate Bill 265 and 266, were signed into law. It complicates matters. It adds complication to an already complicated situation," Avista CEO Dennis Vermillion told financial analysts in an earnings call this week. "And we were just in a position where we need to protect our rights under the current agreement."

NorthWestern has been particularly aggressive in trying to strike a deal to keep the plant open. The utility, based in Sioux Falls, S.D., attempted to buy Puget Sound Energy’s stake in the plant for $1 last year but ran into opposition from Washington state regulators. NorthWestern ultimately pulled out of the deal.

Executives at the utility argue that keeping Colstrip open is essential in the face of a growing shortage of reliable power generation in the western U.S.

"Our existing ownership with Colstrip continues to be extremely important to serve our customers. Absent that, the capacity gap would be just that much greater," NorthWestern CEO Robert Rowe told financial analysts last month.

Many analysts are skeptical of that claim. NorthWestern bases its assumption about a capacity shortage on no new resources being built and does not take into account practices like demand management, said Monica Tranel, a lawyer who served on the staff of the Montana Public Service Commission and unsuccessfully ran for a seat on the board as a Democrat last year.

NorthWestern has a powerful financial incentive to keep Colstrip open. Many of the other utilities with a stake in the plant have paid down much of their debt, but Northwestern has nearly $300 million in outstanding payments on the facility, said Gary Duncan, a staffer who retired from the Public Service Commission last week.

NorthWestern has also been able to profit from its outstanding debt on the plant. As a regulated monopoly, the utility is able to recover the cost of its interest payments from ratepayers. Yet the utility’s interest rates have fallen in recent years, meaning NorthWestern is effectively taking in more money from its customers than it needs to cover the cost of its debt, Duncan said.

"The bottom line is they have this huge cash cow sitting there," he said. "I think what they want to do is extend the life of the plant as long as they can and earn what they can on that existing share. I think that is their primary motivation."

Duncan predicted the laws would be defeated in court and said they could ultimately hasten Colstrip’s closure.

"A lot of the bills in the Legislature had the intent of keeping Colstrip open, but I think they had the opposite effect," he said.