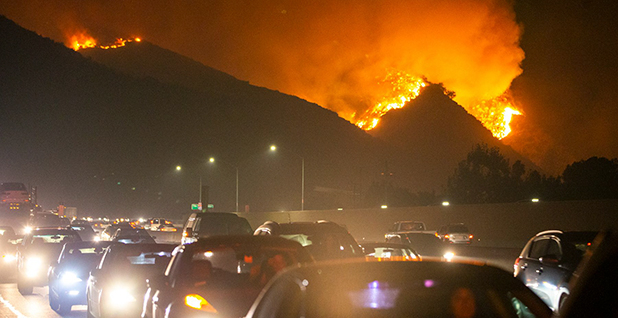 Fire near the Getty Center in Los Angeles on Monday. Chine Nouvelle/SIPA/Newscom

The Getty Fire, an expansive wildfire that started Sunday near the J. Paul Getty Museum in Los Angeles, ignited when a dried out eucalyptus tree branch fell on a Los Angeles Department of Water and Power electric line. That caused arcing, and sparks ignited nearby brush, LADWP said.

"The wind broke off the tree branch, threw that tree branch — because of these strong winds — far enough to cause a spark off the line," Garcetti said at a press conference yesterday. That caused the falling sparks "and then we were off to the races."

The branch was blown into the line from a tree roughly 30 feet from the utility lines, said LADWP, the nation’s largest municipal utility. That distance is outside the amount state law requires for vegetation clearance around a power line. There was not any equipment failure, Garcetti said.

The blaze destroyed at least 12 homes and forced middle-of-the-night evacuations in a densely populated region close to Brentwood, Sunset Boulevard and some of LA’s most affluent neighborhoods. Former Gov. Arnold Schwarzenegger (R) left his home at 3:30 a.m. Sunday, he said in a tweet that called firefighters "the true action heroes." More than 7,000 homes were ordered evacuated, the Los Angeles County Fire Department said.

Meanwhile, Southern California Edison said during in its quarterly earnings report that its equipment likely caused the November 2018 Woolsey Fire. It burned from north of LA through Malibu to the Pacific Ocean, killing three people. It destroyed more than 1,600 homes and other buildings.

Suspicion fell on the utility, but the cause has remained under investigation. In a filing with the U.S. Securities and Exchange Commission, the utility said that a draft report from the Ventura County Fire Department indicated that fire investigators have blamed SCE’s equipment as the cause.

"Absent additional evidence, SCE believes that it is likely that its equipment was associated with the ignition of the Woolsey Fire," the utility said.

Last year, the company told the state Public Utilities Commission an outage of its equipment before the Woolsey Fire may have been caused by a guy wire and a jumper making contact. Guy wires are used to provide pole support and jumpers connect two energized lines.

The development comes as California officials wrestle with how to prevent catastrophic blazes often caused by utility equipment. Under California law, utilities are responsible for damages if their equipment starts a fire, whether or not there was negligence.

San Francisco-based Pacific Gas and Electric Co., the largest utility in California, has been shutting off electricity repeatedly to lower the risk for wildfires. PG&E is in bankruptcy reorganization as it deals with $30 billion in liabilities from fires in 2017 and 2018.

Electricity remained out for more than 400,000 PG&E customers, and the utility was planning to shut off power to as many as 500,000 ratepayers, said Mark Quinlan, PG&E incident commander. He said it was difficult to say exactly how many new people the planned shutoff would affect versus those already out who would stay out, as the situation was "dynamic."

In Sonoma County, north of San Francisco, the Kincade Fire continued raging yesterday. It has burned more than 117 square miles, destroyed 189 structures and injured two people. Firefighters from Oregon, Washington, Montana and other states were battling it and other fires.

PG&E has said its equipment malfunctioned near the start of that fire. The cause is under investigation (Energywire, Oct. 25).

High winds were projected to howl overnight and raise risks for more blazes, in both Northern and Southern California. Red flag warnings — alerts of dangerous conditions — are affecting 43 counties, Gov. Gavin Newsom (D) said. That was on top of very low humidity and dried out vegetation.

"This all adds up to an extreme fire weather threat, meaning that conditions are as dangerous for fire growth and behavior as we have seen in recent history," the Los Angeles County Fire Department warned on its webpage.

"The losses from catastrophic wildfire are forever and they can be devastating," Johnson said. "When the choice comes down to safety or something else we’re going to choose safety. That’s the choice we will continue to make as long as these dangerous weather conditions exist."

The governor again lashed out at PG&E. Newsom said with the new shut-off some customers would be without electricity for up to a week, "which is simply unacceptable."

"That goes to the issue of greed and mismanagement and decades of a utility that didn’t focus on you and public safety but focus on shareholders," he said at a press conference in LA.

"I can assure you the days of being cozy to these three utilities is over," he added, referring to investor-owned PG&E, Southern California Edison and San Diego Gas & Electric Co. "That’s been a legitimate critique of the Public Utilities Commission in the past but is not the case in the present and I can assure you will not be in the future."

Newsom said PG&E had agreed to pay bill credits to customers affected by blackouts. That credit is limited, however, the utility said. Credits of $100 for residential customers and $250 for businesses will go only to those hit by the blackout that started Oct. 9 and lasted three days for some people. It affected nearly 740,000 customers (Energywire, Oct. 10).

"We did not live up to their expectations when it came to communicating about this event," Johnson said in a statement. "We have carefully considered the Governor’s request to provide reimbursement for our customers impacted by the Oct. 9 [power shut-off] and we have agreed to move forward with a one-time bill credit for customers impacted by that event."

"Wait — the power goes out for this long in three separate events, and I get $100? This is the problem with crappy companies and crappy politicians," Mitch Applegarth wrote on PG&E’s Twitter post about the credit.

Newsom said over the weekend he wants investor Warren Buffett’s Berkshire Hathaway Inc. to look at bidding for PG&E’s assets when it emerges from bankruptcy. A reporter last night asked PGE’s Johnson for his response.

Johnson said Buffett has a good eye for seeing an opportunity and "if he sees one here I’m sure he’ll take it."