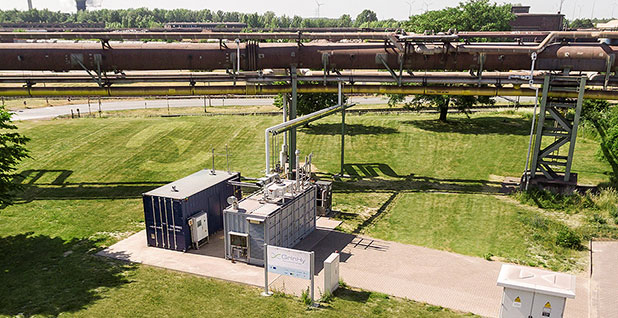 Some of the nation's largest gas utilities are testing ways to mix "green" hydrogen produced via electrolyzers, like the one seen here in Germany, into natural gas pipelines. Copyright Salzgitter Flachstahl GmbH/Flickr

Two of the nation’s largest gas utilities said this week they would launch one of the country’s first demonstrations of blending renewable hydrogen into natural gas pipelines, sparking a debate about whether the concept is cost-effective for cutting emissions.

In a pilot to be executed over several years, the companies plan to introduce "green" or carbon-free hydrogen into natural gas pipelines made of steel and plastic. Hydrogen would make up 1% to 20% of the gas being transported on a given line.

The aim is to develop technical knowledge "to identify safe blending standards," said Christine Detz, a spokesperson for SoCalGas.

The demonstration could also spark new demand for low-carbon hydrogen more broadly, said Jeffery Preece, a research and development program manager at the nonprofit Electric Power Research Institute. If the fuel could be transported cheaply and safely via pipeline, it could have a variety of uses, such as supplying heat for heavy industry and residences, researchers say.

Kevin Sagara, the chairman of both companies, said the pilot was "a key milestone in our efforts to decarbonize our energy system" alongside investments in renewable natural gas, fuel cells and carbon capture.

Some energy researchers said the California utilities’ demonstration was likely to yield positive results, allowing them to cut CO2 emissions from their gas networks without requiring expensive retrofits.

But some environmentalists expressed wariness about the utilities’ intentions.

"We think this is an interesting investigation," she said. "But the important nuance is, this shouldn’t drive any large-scale investments in the natural gas network."

It also "should not distract [California] or the companies from investing and going after building electrification," she added. "That is the caveat."

In California, regulators are weighing whether to require new buildings to ditch gas as a fuel source in favor of all-electric technologies for stoves and space heating. Dozens of localities have already adopted similar codes.

SoCalGas has emerged as a fierce opponent of that push for building electrification, sparking accusations from utility watchdogs and federal lawmakers. In an October letter, for example, Sen. Dianne Feinstein (D-Calif.) told the company’s leaders that the anti-electrification campaigns amounted to an attempt to "systematically undermine" state climate goals. The company has pointed to its hydrogen and biomethane programs as evidence that it has a climate strategy (E&E News PM, Oct. 29).

In response to criticism, Detz, SoCalGas’ spokesperson, said gas fuels and the pipelines that transport them would be "a necessary facilitator of decarbonization," for uses including transportation and the power sector.

SoCalGas and SDG&E, along with other investor-owned utilities in California, have asked regulators at the California Public Utilities Commission to begin tracking costs incurred by the pilot, in order to later request cost recovery for it.

A 2018 law in California, where both utilities’ territories are located, called for regulators to consider targets for blending hydrogen and other cleaner alternatives to natural gas, like biomethane, into the pipeline system.

Terrie Prosper, director of news and outreach at the CPUC, said the agency was carrying out its own assessment of blending hydrogen into gas lines. One ongoing study by the University of California, Riverside, into the subject is expected to emerge in 2021, she noted.

"The last thing we want to do is approve injection standards that could have an adverse effect on the existing pipeline network and potentially compromise safety and/or reliability," she wrote in an email.

But for hydrogen to serve as a resource for the deep decarbonization of gas pipelines, utilities and officials will need to confront a morass of complex details, researchers say.

For instance, heavy industries like cement-making may have very different needs from their fuel sources than residences and other buildings. Once a molecule is mixed into the pipeline network, however, it can be hard to track where it ends up being used. And converting gas pipelines and appliances to hydrogen would probably come at a whopping expense.

End users would also require a greater amount of hydrogen in order to do the same amount of work that natural gas usually does.

"It has a third of the energy density [of natural gas]," said Preece of the Electric Power Research Institute. "No one’s truly suggesting that hydrogen would replace it. I prefer the word ‘alternative.’"

The utility announcement came a day before Plug Power Inc., a fuel cell producer, said it had raised $1 billion in equity for its plan to build five U.S. facilities where hydrogen is made via wind and solar power.

The company also plans to open a factory in New York where it will ramp up production of electrolyzers. The high cost of those machines, which use electricity to split water into hydrogen, is often cited as a main barrier to hydrogen’s proliferation as a fuel source, along with the expense of transporting it.