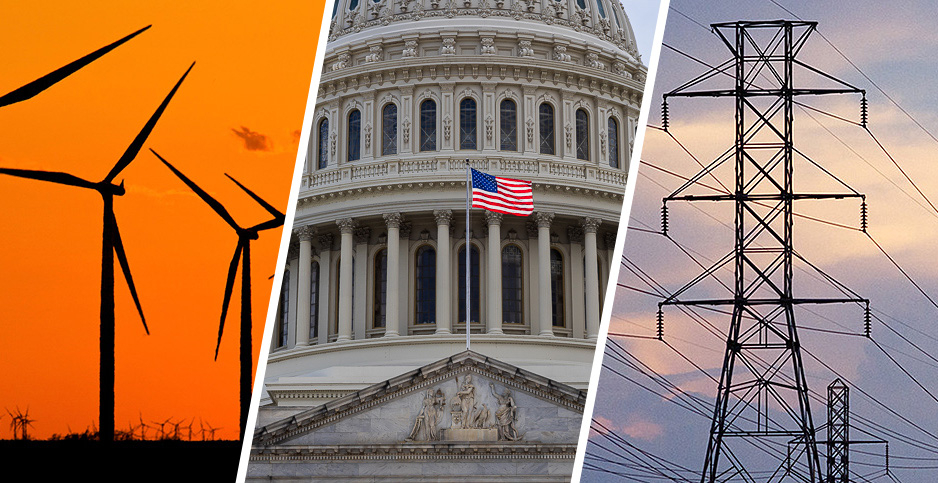 Clean electricity standard proposals are getting attention from high-profile players in energy and advocacy, as lobbying ramps up ahead of a congressional push on climate policy.

CES legislation is showing up in utility lobbying disclosure forms, and some companies — recently joined by the Nuclear Energy Institute — are supporting the policy framework.

The advocacy comes amid a flurry of CES proposals on Capitol Hill, including in the Energy and Commerce Committee’s "Climate Leadership and Environmental Action for Our Nation’s (CLEAN) Future Act," H.R. 1512, and President Biden’s infrastructure plan.

The proposals would generally mandate that utilities use increasing amounts of clean generation sources to produce electricity and set targets for 100% clean energy deployment.

The way major industry players deal with the idea could be a deciding factor in whether Democrats can get a CES through Congress and whether they can reach agreement on emissions targets amid ever-increasing pressure from the party’s left flank.

"The utility sector sees that this is what’s on the table now to address power-sector greenhouse gas emissions," said Yvonne McIntyre, director of federal electricity and utility policy at the Natural Resources Defense Council.

"On the other side of it, too, though, we now have a Democratic administration that is going to use EPA regulations as well to try to target power-sector emissions, and for the most part, the power sector would rather have legislation than EPA regulations," added McIntyre, who previously worked for more than 30 years in engineering and government affairs in the power sector.

But the CES momentum is also related to the utility industry’s willingness to get on board with carbon-free energy, which already accounts for more than 40% of the United States’ electricity generation.

"If you asked me what the power sector writ large what their position is, I would say that individual power companies have answered that in no uncertain terms, both in terms of the commitments they have made as a result of their own planning processes and the amount of money they spend every year," said Scott Segal, a partner at Bracewell LLP, which represents energy industry clients.

Utilities have also already started to plan targets that would align with net-zero goals by 2050 — the target many scientists have set to limit catastrophic climate change. That includes more than two dozen member companies of the Edison Electric Institute, which represents investor-owned utilities.

"Provided a CES can give certainty and provide sufficient flexibility, I think that more and more power providers are going to take a CES seriously," Segal added.

‘There is an opportunity’

Some of those companies are also supporting specific CES proposals.

The companies and trade groups are, in turn, lobbying on DeGette’s and other CES bills.

It is not possible to tell through disclosure forms what they are saying about given legislation or whether they support it. Rather, the disclosures show the companies are engaging lawmakers on CES legislation.

EEI, for instance, has reported lobbying on CES legislation dating back to 2019. In its most recent disclosure, for the fourth quarter of 2020, EEI reported lobbying on DeGette’s "Clean Energy Innovation and Deployment Act" and other similar legislation, including a CES proposal from Reps. David McKinley (R-W.Va.) and Kurt Schrader (D-Ore.) (Greenwire, Dec. 28, 2020).

Duke Energy — and many other big investor-owned utilities — has reported lobbying on a similar suite of bills, including the CES provisions of the "CLEAN Future Act."

While investor-owned utilities generally don’t like to retire assets early, "everybody in the utility industry has known that coal was a lousy investment since the Clean Air Act was passed; they don’t all say that publicly, but they all know it," said Rep. Sean Casten (D-Ill.), who spent years in the energy industry before coming to Congress.

"We’ve already seen places where you’ve got a bunch of renewables that can’t dispatch off, too much power on the grid and prices go negative. It’s really hard to be a utility in that environment," Casten said.

"I think the utilities are very supportive in general in ways that they didn’t used to be because their old assets that are dirty are hitting end of life, the new assets they’re building will benefit from this, and the price of power’s collapsing," he added.

For the nuclear industry, the single largest source of carbon-free production, the certainty of a CES may prove the long-sought elixir to solving the lingering financial woes for its existing nuclear fleet.

The Nuclear Energy Institute outright endorsed the policy during its annual state-of-the-industry meeting on March 23 as its preferred climate action policy, arguing it represents the best policy option to actually get enacted into law.

"I’m not trying to say a carbon tax wouldn’t be interesting. Honestly, you need to get something across the finish line for it to be effective," NEI President and CEO Maria Korsnick said during the event (E&E News PM, March 23).

"So when you see us leaning into that clean energy standard, it is simply because that is our view that there is an opportunity there for that to make it across the finish line."

Even as power providers get more comfortable with the idea of a clean electricity standard, some in the sector are wary of the target date lawmakers might set.

The current fallout from February’s Texas grid crisis and broader focus on transmission deployment to accommodate greater shares of renewable energy could only intensify those concerns.

The 2035 deadline for the nation to reach 100% clean power as proposed by Biden and in the "CLEAN Future Act" may prove difficult.

EEI Chairman Ben Fowke, who is also chairman and CEO of Minneapolis-based Xcel Energy, said as much during a recent appearance before the Senate Environment and Public Works Committee.

"Renewable energy can only take us so far," Fowke said. "At higher levels of intermittent renewables, the cost of the energy system begins to skyrocket, and its reliability degrades."

EEI has not said much publicly about clean electricity standards, and Fowke was speaking before EPW in his capacity as Xcel CEO.

But that gap has industry leaders and advocates eyeing the McKinley-Schrader proposal as a more attractive standard structure. The legislation would allow a 10-year gap for innovation development before enacting a CES targeting an 80% power-sector emissions reduction by 2050.

McKinley and Schrader have framed their bill, introduced late last year, as a realistic proposal that could draw Republicans to a long-partisan issue.

"We pick the year 2050. I think we could negotiate on that, obviously," Schrader said during an event with Columbia University’s Center on Global Energy Policy last month. "I think 2035 is a little optimistic and probably unrealistic, but I talked to energy companies, and some are able to move quicker than others."

It may be more difficult, however, for CES supporters to get smaller electric utilities on board with their proposals.

Neither publicly owned utilities nor electric cooperatives can raise money from corporate investors to spend on new projects and can’t directly benefit from tax incentives, among other issues.

The American Public Power Association is in the process of talking with its members — municipal and other government-owned utilities — about what would have to be in CES legislation to get their support.

"We’re trying to get to yes. We’re trying to be able to say, ‘This is affirmatively what we want,’" said Desmarie Waterhouse, vice president of government relations for the group.

Public Power’s main priorities include finding a workable and realistic time frame for reaching net-zero carbon and figuring out how to pay for the costs associated with such a transition.

"With the magnitude and the scale in which you’d have to do this, we just don’t see how that’d happen in under 14 years," Waterhouse said, referring to a potential 2035 goal.

"This is incredibly complicated. It’s not something we can do in a very short period of time, and it’s going to come at considerable costs," she said. "It’s not an excuse not to eventually go there, but there are these real challenges."

Getting support from rural cooperative utilities might be even harder. Louis Finkel, senior vice president of government relations at the National Rural Electric Cooperative Association, said the group could come to back a CES — particularly if it proves more manageable than a primarily regulatory approach — but there are key questions about how co-ops can maintain reliable and affordable service.

"The details of a proposal put forward by policymakers matters. And thus far, there’s a lot of details that I think still need to be put forward," he said.

Finkel said any CES needs to take into account concerns like regional differences and the state of technology.

"Any transition needs to be accomplished over a reasonable and realistic time period and needs to take into account the regional disparities of resources. Every resource isn’t available in every part of the country in a real way," he said.

"We still need technology development like carbon capture and sequestration. We need advancements in storage that can provide that backstop for renewables. The price point of nuclear power continues to be incredibly high," he added.

The political future for any clean electricity standard proposal is uncertain, with the GOP still broadly resistant.

McKinley is the only Republican supporting his bill so far, though he has hinted that more may be interested.

Meanwhile, other parts of corporate America and Big Oil companies have focused their climate advocacy elsewhere, namely on various forms of carbon-pricing proposals.

It’s also a policy that could be difficult to fit into budget reconciliation, the process that allows Democrats to pass certain spending and tax legislation through the 50-50 Senate by a simple majority.

Energy Secretary Jennifer Granholm said this week she believes a CES could get support from Republicans and other lawmakers who might be skeptical it could work for their constituents. But it could also be crafted in a way to allow for the reconciliation process if necessary, Granholm told a Bloomberg New Energy Finance conference (Energywire, April 14).

Asked about the utility and nuclear industry support for clean electricity standards, Rep. Garret Graves (R-La.) said he would rather "let the innovators innovate."

"It’s not the government that people look to for innovation," Graves, the ranking member of the Select Committee on the Climate Crisis, said in an interview.

There’s also pressure from environmental groups to go aggressive with the CES target. McIntyre said NRDC is pushing for a 2035 timeline in a CES. She also acknowledged that some utilities don’t yet see a technological path to full decarbonization.

But, she added, "if you look at the packages that are coming out — the jobs plan, ‘CLEAN Future Act,’ whatever else we may see in the future — they’re trying to kind of include all these things that the sector is saying that they need to be able to get to the commitments that they’ve made."

Sen. Sheldon Whitehouse (D-R.I.), one of Capitol Hill’s top climate hawks, said the research and development dollars and tax credits utilities could see packaged with a CES may offer them a reason to support the policy — even if it’s not the most efficient path to reducing carbon emissions.

"The question at the end of the day is going to be, what is the net gain from the enhanced clean electricity standard against what utilities likely would have done without it?" Whitehouse added.

According to the Center for Climate and Energy Solutions, 29 states have enacted some form of renewable portfolio standard or CES requiring a certain percentage of electricity to come from renewables or alternative energy.