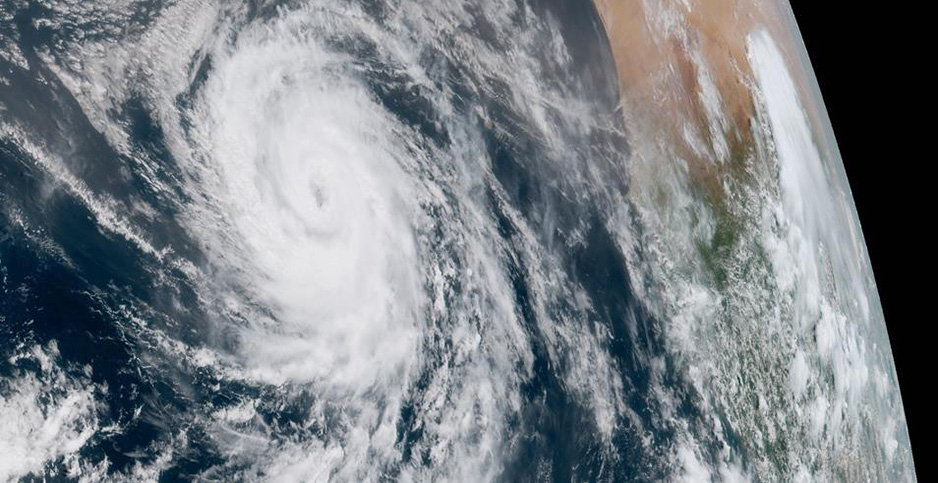 Hurricane Florence is seen in this Monday satellite image. @NOAA/Twitter

Across the southeastern United States, masses of residents fled the approach of Hurricane Florence yesterday, with officials in a half-dozen states echoing the warning of National Hurricane Center Director Ken Graham: "It’s a catastrophic event."

Florence, due to hit land Friday, poses a fearsome triple threat, he predicted — the expectation of 130-mph sustained winds, devastating storm surges threatening coastal areas and rivers alike, and massive flooding from an inundation of rainfall that could persist into Sunday.

Along with federal, state and local emergency responders, the region’s utility companies prepared for multistate power outages that could match or exceed the damage from Hurricane Irma, in 2017, which blacked out 6.7 million customers in Florida, two-thirds of the state’s total.

As Irma, Hurricane Harvey last year and Katrina, in 2005, showed, each of these calamities endangers generating plants and power grid operations in different ways. When Florence hits land, it could add more tragic evidence to the debate launched by the Trump administration on how best to protect electric power service in extreme emergencies.

The Electricity Subsector Coordinating Council (ESCC) — a high-level group of utility CEOs and federal officials — on Monday had its first of what promises to be many conference calls.

The National Hurricane Center today reported that the storm, currently a Category 4 hurricane, was increasing in size and getting better organized, and warned of "life-threatening storm surge possible along the coasts of North and South Carolina."

The Federal Energy Regulatory Commission is "in constant contact with the North American Electric Reliability Corp. and its regional entities involved, and is monitoring the situation on a regular basis," said spokeswoman Mary O’Driscoll.

The agency’s Office of Electric Reliability maintains real-time situational awareness of what’s happening on the bulk power system through a 24/7 emergency reporting system. And the agency is getting regular updates from utilities and participating in ESCC calls, O’Driscoll said.

Energy Department officials did not respond to an inquiry about the department’s role in coordinating a response to potential grid damage or widespread loss of power.

‘Battle rhythm’ and a gathering storm

The Trump administration’s focus on electric grid resilience through periods of extreme weather or man-made disruptions also will be put to the test in the coming days.

The Edison Electric Institute, which represents investor-owned utilities, is already in a "battle rhythm," with calls throughout the day with DOE, the Federal Emergency Management Agency and its affected member companies, said Scott Aaronson, vice president for security and preparedness at EEI.

"Besides the culture of mutual assistance that is the hallmark of our industry, there is the commitment to constant improvement. We learned a lot from Sandy and then Matthew and the historic 2017 hurricane season," he said.

There is no single individual in charge of the hurricane response effort, Aaronson said. The ESCC is there to work collegially and "solve problems in real time," he said, such as advocating for the lifting of flight restrictions to get drones and helicopters in the sky to do assessments.

"Individual grid operators know what to do to restore power. Every company has their storm boss, and it’s their job to get the lights back on for their footprint," he said.

In terms of how the response to Florence informs on the resilience of the grid, "we can learn what works and what we need to invest in," Aaronson said. "The other part of resilience is to understand that you can’t stop impacts all of the time from all of the threat."

Charlotte, N.C.-based Duke Energy Corp. said it expects widespread damage and power outages in the Carolinas. Historical data and experience indicate "that total power restoration from a storm of this magnitude could take multiple days to several weeks depending on the extent of damage and post-storm conditions, such as ongoing high winds and severe flooding," it said.

Assessing damage to the grid can take 24 hours or more, Duke said.

Spokesman Neil Nissan said the utility has about 4,600 restoration workers positioned in the Carolinas, and nearly 1,000 workers are coming from the Midwest and Florida to help. They’ll wait outside of the storm zone and move in after the storm has passed.

Nissan said Duke does not expect "any generation issues as a result of this storm," citing its balanced portfolio of nuclear, combined-cycle natural gas, coal, hydro and renewable power.

Rural electric cooperatives in the path of Florence are "coordinating mutual aid agreements with co-ops in other states, including Kentucky, Tennessee, Alabama, Arkansas and Ohio," said Stephen Bell, spokesman for the National Rural Electric Cooperative Association.

‘Deadly and important game of chess’

For some, their most recent memory is Hurricane Matthew, which rolled up the Carolina coast in 2016. Matthew knocked out power to 1.5 million Duke customers. It cost the utility $125 million to repair power lines and substations and replace waterlogged equipment. Roughly 300,000 customers of South Carolina Electric & Gas Co. (SCE&G) lost electricity from Matthew, which had weakened to a Category 1 storm by the time it reached the coast.

South Carolina Gov. Henry McMaster (R) made references to Hurricane Hugo, which slammed into Charleston in 1989, during a media briefing yesterday. He called Florence a force that’s even greater than Hugo and said officials are not going to gamble with anyone’s life.

"We are in a deadly and important game of chess with Hurricane Florence," he said.

Scana Corp.’s SCE&G has inspected and replaced thousands of poles in an eight-year period as part of efforts to rebuild and harden roughly one-third of its transmission system, a spokesman said.

This includes replacing wooden poles with steel ones and adding roughly 540 miles of new circuit wire, said Paul Fischer in an email to E&E News.

Much of SCE&G’s electricity travels over more than 3,500 miles of aboveground transmission lines in South Carolina, while only 20 miles of its transmission is buried below.

The utility, like others, faces an ongoing tug of war over how much of its power lines to place underground because much of the state is in low-lying areas. This means storms such as Florence that are expected to bring heavy rains and flooding could actually delay restoring electricity to areas where power lines are underground, Fischer said.

Federal nuclear regulators have sent additional inspectors to nuclear plants in North Carolina, South Carolina and Virginia that may be in the storm’s path, said Joey Ledford, an Atlanta-based spokesman for the Nuclear Regulatory Commission.

Those inspectors will ride out the storm at the plant. At the same time, the NRC is encouraging the electric companies to start preparing the sites for high winds and heavy rains, ensuring that all loose debris and equipment has been removed from the area, he said.

One part of preparing a nuclear site for a storm is making sure the diesel generators are working and have fuel to operate in case they need to supply backup power to the site, Ledford said.

The NRC sent additional inspectors to Duke Energy’s Brunswick and Harris nuclear plants in North Carolina, as well as its Robinson plant in South Carolina.

They also were sent to the operating reactor at SCE&G’s V.C. Summer plant in South Carolina and to Dominion Virginia Power’s Surry and North Anna nuclear sites in Virginia.

Safety regulators require utilities to shut down nuclear reactors before hurricane-force winds hit. Electric companies must bring the reactors to their safest possible state before heavy winds or storm surge gets to the area, Ledford said.

Based upon Florence’s current projected path, Duke’s Brunswick nuclear plant, north of Wilmington, N.C., is considered likely to have hurricane-force winds, Ledford said. The Harris plant outside of Raleigh, N.C., and the Surry plant, northwest of Norfolk, Va., also could have high winds.

The lessons of Harvey

At the outset of his administration, President Trump set off a debate over protecting the nation’s electric power infrastructure from extraordinary threats with his promise to reverse the precipitous decline of coal-fired generation and bolster coal companies and coal communities.

The Energy Department has advanced a plan to channel subsidies to money-losing coal and nuclear plants to prevent their early retirements. These units’ on-site fuel supplies make them uniquely valuable assets in grid emergencies, DOE said in a draft of its plan, which is still being worked on inside the administration.

Representatives of the natural gas, petroleum, wind and solar power industries have attacked the proposal as unjustified and an unfair benefit to the coal sector, promising lawsuits if the plan is adopted.

The toll from deadly storms like Harvey last year, however, reveals indiscriminate damage to all kinds of power plants and transmission networks. After-action reviews on Harvey showed that none escaped unscathed.

Harvey made landfall near Port O’Connor on Texas’ Gulf Coast at 10 p.m. local time on Aug. 25 last year. At least seven hours earlier, with Harvey still 85 miles off the coast, offshore wind turbines were forced to shut down because of high winds, according to a report from the Electric Reliability Council of Texas (ERCOT).

When it did strike, 1,500 megawatts of generation of various kinds on the coast had tripped off or deliberately closed down, and the facilities’ workers were evacuated. At the storm’s peak, 68 generators totaling 13,000 MW of capacity were out of commission because of the storm, ERCOT said.

Flooded facilities had the biggest impact, then lack of fuel, as flooding and crew evacuation affected natural gas pipelines, ERCOT said. But coal-burning plants were hit, too. Close behind those two impacts were outages due to wet fuel.

An additional 5,700 MW of generation had to operate at reduced output over the four worst days of the storm due to wet coal, low gas pressure and high winds, according to Texas RE, the Texas grid reliability monitor.

Some communications channels carrying operating information back to control rooms were disrupted by flood installations and loss of backup battery power.

Nuclear plants did the best in Harvey, continuing to operate throughout the storm, although the potential loss of outside power to the plants increased.

And grid operators were able to keep power deliveries balanced, as the loss of generation was coupled with a steep dive in demand as customers evacuated or were flooded out. A total of 1.67 million customers were without power at Harvey’s peak.