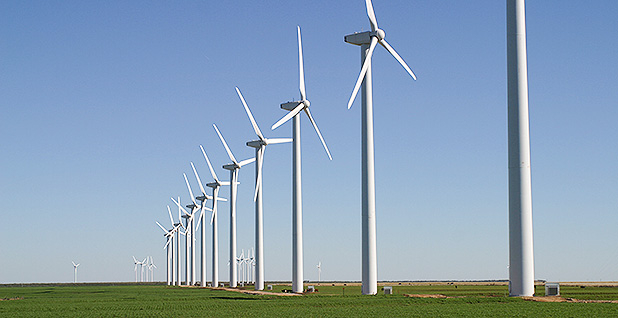 Clean energy is here to stay, the Edison Electric Institute and the Natural Resources Defense Council say in a joint statement issued today at a meeting of the nation’s utility czars. Pictured here is the Green Mountain Energy Wind Farm near Fluvanna, Texas. Leaflet/Wikimedia Commons

The leading lobby for the electric utility industry and a prominent environmental group today issued a joint statement in support of an "accelerating" clean energy transition that is defined by energy efficiency, reducing carbon emissions and empowering states and customers.

The 21 recommendations from the Edison Electric Institute (EEI) and the Natural Resources Defense Council speak not just to where the electricity industry is now, but — more important — to where it is headed in the coming decades.

The Trump administration is unlikely to be pleased. The document offers a robust defense of government and private-sector programs and policies that have been targets of administration criticism or outright elimination as recently as in the proposed fiscal 2019 budget released Monday.

"Our perspectives and constituencies are very different, but we find much common ground on clean energy progress, grid infrastructure needs, opportunities for regulated electric companies in electricity resource portfolio management and investment, and the potential need for collaboratively developed rate design and other regulatory reforms," EEI and NRDC said.

The recommendations are aimed at members of the National Association of Regulatory Utility Commissioners, who are wrapping up their semiannual policy meeting in Washington.

EEI and NRDC are not strange bedfellows. This is the fourth joint statement they have issued since 2002 at a meeting of the nation’s regulators in an effort to define areas of agreement and collaboration — and possibly influence the development of state regulations.

The last was in 2014, when the two groups spoke in support of new state-level electric rate regimes to enable the continuing expansion of distributed solar power while keeping utilities financially whole and able to maintain the electric grid (Energywire, Feb. 13, 2014).

In an interview, Cavanagh said, "The electric industry’s leadership is bound to the clean energy transition. They’re committed to it, they believe in it, and they believe it’s good for their customers."

The document favors continued "support of federal energy efficiency programs" such as appliance and building standards as well as funding to help low-income customers share in clean energy programs.

While it wasn’t intended as a rebuke to President Trump’s spending priorities, Cavanagh said, the statement "stands in stark contrast with the administration’s."

He called it a "big deal" that the statement says "electric companies should not be treated or viewed as energy commodity providers; their focus should be customers’ evolving energy service needs."

As much as it’s "reaching right back to Thomas Edison" and the electric industry’s early days more than 100 years ago, "it’s important in signaling a shift to the fundamental business" model that has evolved since then, Cavanagh said.

"If you were to boil it down, the overall theme [of the statement] is the importance of the grid," Moeller said in an interview.

"It’s a recognition that those kinds of investments to bolster and modernize the grid are essential as we move forward with all type of new entrants into the energy marketplace," he said. "That’s something that we’ve needed to emphasize more over the last few years, and it’s starting to resonate."

With an eye toward addressing resilience — a popular topic of late in the electric sector — the statement calls for "a reexamination of liability doctrines that may not be well-suited to an era of increasingly violent and destructive weather and wildfire events."

"That will require some cost recovery, and we want to make sure that people who are in a position to consider those are well aware of what we’re facing there," he said.

Said Cavanagh, "For everyone who wants to see utilities as engaged and committed clean energy partners, this is an issue of concern, because they can’t do it if they’re bankrupt.

"We cannot live with the illusion that a utility is always a deep pocket that can make everyone whole after a natural disaster," he said, such as the recent California wildfires and Superstorm Sandy in 2012.

"If we stay on the path we’re on now, we’re going to have insolvent utilities and inadequate compensation" for victims of natural disasters, Cavanagh said.