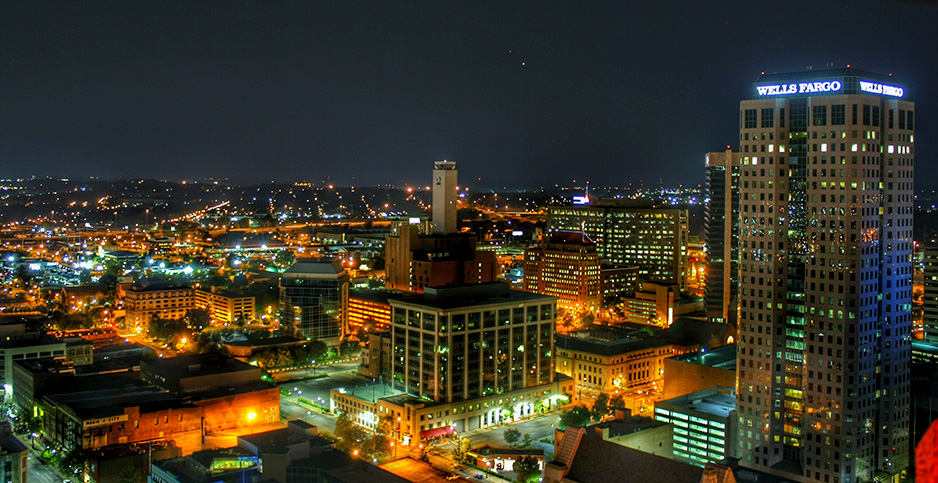 The Birmingham, Ala., skyline at night from atop the City Federal Building. Hundreds of groups signed a letter urging governors, mayors and utility regulators to put a moratorium on all electricity and water shut-offs amid instability as a result of the spreading novel coronavirus. Amcannally/Wikimedia Commons

U.S. utilities are facing growing calls to ban electricity and water shut-offs as communities across the nation grapple with layoffs and furloughs tied to the unfolding coronavirus pandemic.

Almost 600 consumer, environmental, faith and labor groups, including the Center for Biological Diversity (CBD), Sierra Club and Partnership for Southern Equity, sent a letter to state governors, mayors and utility regulators today, urging all utilities to provide a waiver of late payment charges and a reinstatement of services to customers who might have been cut off. Termination of service has occurred in some instances when workers were laid off, were furloughed, or could not work and pay their bills because of the outbreak.

So far, state officials have ordered the suspension of utility disconnections in more than a dozen states, according to CBD, and a number of individual energy companies and cities are following suit.

Access to electricity and running water, the groups argued, is crucial to protecting U.S. households from further spread of COVID-19, caused by the new coronavirus, which has claimed 97 American lives, according to the Centers for Disease Control and Prevention. On top of the requested moratorium on shut-offs, the letter called on governors; mayors; regulators; and power, water and utility groups to address systemic issues underlying "energy and water injustices" across the country.

"We urge your associations to compel your members to implement policies that both increase the deployment of and access to distributed clean energy systems and that establish percentage-of-income payment plans for water and other utility services, which enhance the long-term energy and climate resilience for all low-wealth families, communities, and tribes across the country," the groups wrote.

The letter stressed the impact that an economic downturn would have on Americans working low-wage jobs, urging that families should not be in a position to decide between seeking care for COVID-19 or other illnesses and maintaining access to power and water services.

While several states have called on utilities to implement a moratorium on electricity or water shut-offs, some major utilities still haven’t taken that step.

Jean Su, a staff attorney and the energy justice program director at CBD, said access to electricity is a "basic human right," and that the coronavirus outbreak is a good opportunity to look at permanent moratoriums for low-wealth families who are unable to afford basic utilities.

Some suggested the letter didn’t go far enough to acknowledge the number of utilities already vowing to provide relief.

Frank Maisano, a principal at Bracewell LLP, a law firm representing energy companies, said the letter doesn’t reflect that utilities are already focused on customers and in normal times participate in charitable work and low-income and poverty programs. “For 600 environmental groups and others to suggest they need to commit to not shutting people off is absurd, especially when most of them have said they’re not doing that anyway.”

Still, National Association of Regulatory Utility Commissioners President Brandon Presley of Mississippi in a statement yesterday said he was "pleased" to see many states have placed a moratorium on service disconnections during the pandemic.

"In the midst of these challenges, worrying about continued access to utility service should not be among anyone’s concerns," he said. "Many people are just beginning to fully realize how closely utility service — and its effective regulation — is tied to public health and the overall public welfare. On behalf of NARUC, I want to thank our commissioners for their attention to the many issues associated with COVID19."

Illinois and West Virginia regulators are "urging" utilities to suspend disconnections, she said, and the governor of South Carolina is "request[ing] that all regulated utilities and cooperatives … do not suspend or disconnect essential services."

But the letter argues that this list isn’t growing fast enough.

"In addition, several investor-owned and public utility companies have voluntarily suspended service disconnections for nonpayment, including ConEdison, Dominion Energy, Duke Energy, Georgia Power, and Southern California Edison," the groups wrote in the letter. "However, many of the country’s 3,300 private, public, and rural cooperative electric utilities have not suspended disconnections."

One of those is Birmingham-based Alabama Power, which said Saturday that it was "prepared to maintain reliable electric service" but did not immediately commit to shut-off moratoriums and a waiver of late fees. On its website, the utility said that since a state of emergency was declared, it has not disconnected customers for nonpayment and has no plans to do so "for those impacted by COVID-19."

Daniel Tait, CEO of advocacy group Energy Alabama, said Alabama Power should immediately suspend shut-offs and late fees through the end of April for customers unable to pay their utility bills during the pandemic. Tait, who signed the CBD letter, was part of a different, local coalition that sent a letter yesterday to the Alabama Public Service Commission, pressing the group to "issue an order suspending shutoffs and the accrual of late fees for all regulated electric, gas, water, and telecommunication utilities."

Michael Sznajderman, a spokesman for Alabama Power, said yesterday that the company has no plans to disconnect any customers impacted by COVID-19.

"Anyone who is affected by COVID-19, we will not be cutting off service to any of those individuals," Sznajderman said, adding, "Our policy is that no customer financially affected by this is going to experience a service interruption."

He said Alabama Power is encouraging customers who are having difficulty paying bills to contact the utility and that there are "a variety of resources and options" the company offers.

"Each case of financial hardship, we’re going to be handling that on a case-by-case basis," Sznajderman said.

Florida Power & Light is also facing pressure to ban shut-offs beyond the end of March. When asked about calls for advocates for a lengthier halt to shut-offs, a spokesman for the utility indicated little had changed.

"We are suspending disconnections at least through the end of March," the spokesman said. "For customers experiencing hardship as a result of COVID-19, we have resources available at fpl.com/help."