Utilities vow to work with Biden on ‘Build Back Better’ 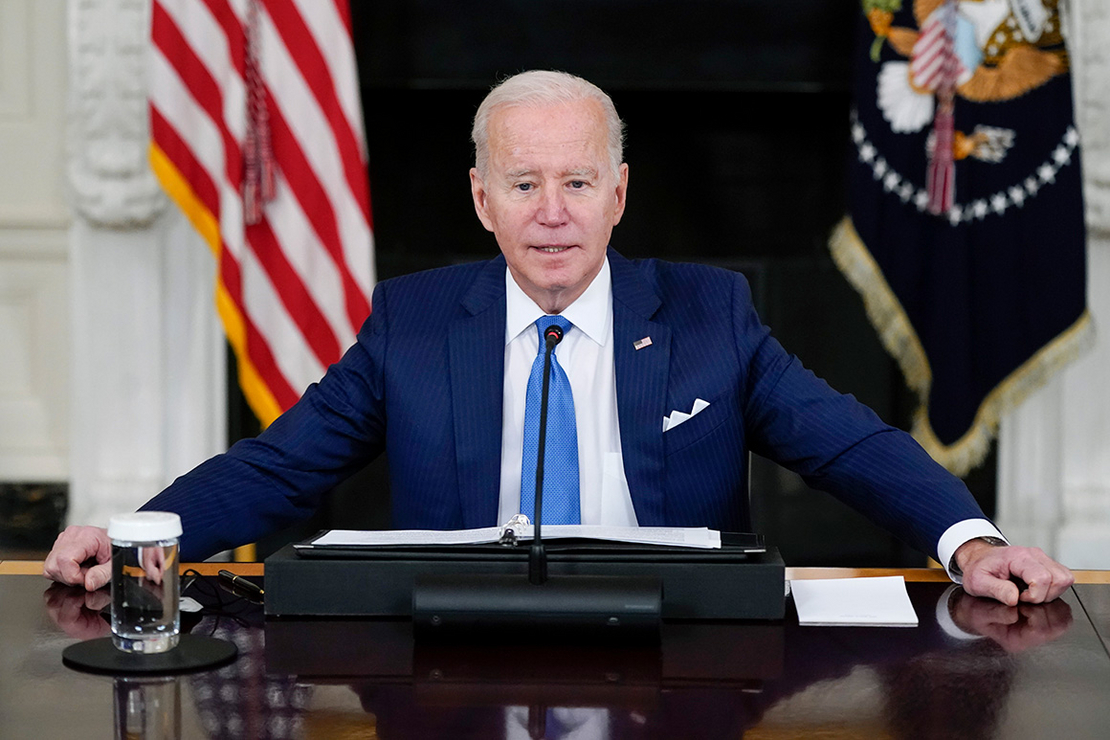 President Biden speaks during a roundtable meeting with CEOs of electric utilities in the State Dining Room of the White House yesterday. AP Photo/Patrick Semansky

President Biden gathered with energy utility executives yesterday at the White House, and he said their mere presence at his side was proof the landscape on clean energy had shifted dramatically.

“Four years ago, when I was sitting, talking about this issue, the question was no, you guys aren’t going to do this, it’s not going to happen,” he said. But now “you’re here saying you support this and you’re going to move if we can get this ‘Build Back Better’ piece done.”

Biden’s meeting with utility executives comes as his proposal to spend more than $500 billion on climate policy and clean energy tax credits remains stalled in the Senate.

Though his climate ambitions now appear elusive, Biden said the willingness of utilities to sign off on more aggressive climate plans marks a notable change from the last time he was in the White House, when he served as vice president to former President Obama.

Biden said utilities would play an essential role in ramping up the use of renewable energy resources, which can spur a more robust U.S. market and manufacturing sector. That also could loosen China’s firm grip on clean energy technology, he said.

“In some cases, China is ahead of us, but I think we’re gonna end up having a significant export market as well,” Biden said.

Yet even as Biden painted yesterday’s meeting as a major step forward, progress in the utility sector has been inconsistent.

Utilities still own coal-fired power plants across the country, and many continue to rely on natural gas and fossil fuels. Though some utilities have worked to shutter aging coal plants on a rapid timeline, others have worked to kill key climate policy. That includes the Clean Electricity Performance Program, which would force utilities to shift more quickly to clean energy sources.

But in general, the utility sector has embraced clean energy funding and tax credits, which would improve their bottom line and fund new credits for transmission lines, hydrogen plants and energy storage. It also could provide funding to keep money-losing nuclear power plants open.

“This legislation is going to allow us to be carbon free sooner, gives us renewable portfolio standards, allows us to securitize, to keep costs down for customers,” said Patricia Vincent Collawn, CEO of New Mexico-based PNM Resources Inc.

For now, Biden’s bold climate spending bill is on life support. Sen. Joe Manchin (D-W.Va.) stopped the $1.7 trillion “Build Back Better” proposal and said it must be rewritten entirely. Manchin is one of the top recipients of utility company donations in Congress.

Biden, however, has tried to remain upbeat. During his conference with energy utility executives, he cracked a joke at the expense of former President Trump, who once falsely claimed that “windmills” cause cancer.

“Generic question: Are you getting less resistance when you talk about wind and windmills? I know they cause cancer,” Biden said before adding “bad joke.”

Nick Akins, the CEO of American Electric Power, told Biden that the “Build Back Better” plan would help tackle one of its hardest challenges, which is bringing more power into cities from renewable resources located in rural areas.

“Where we run into some issues is where there is large-scale transmission,” he said. “We really do need to find ways to scope large transmission to get renewables to the big cities.”

Despite their pledges to Biden, some of the participants at yesterday’s meeting have contributed to climate denial before. In 2017, Southern Co. CEO Tom Fanning said in a CNBC interview that there was not enough evidence to determine humanity’s contribution to climate change.

But utility executives have sounded a different tone in recent years, announcing plans to close coal plants, add renewables and achieve net-zero emissions. Seven of the nine companies present at the White House have pledged to reach net zero by 2050.

Yet questions about their climate commitments continue to dog the companies.

AEP, Ameren Corp., DTE Energy, Duke Energy Corp. and Southern historically have been major coal burners. While all have reduced their coal consumption in recent years, they still plan on running their largest coal facilities for decades. AEP, in particular, raised concerns about the Clean Electricity Performance Program, which was stripped from the legislation passed by the House last year.

Utilities remain wary of regulations that may force the closure of power plants, said Paul Patterson, a financial analyst who tracks the industry at Glenrock Associates LLC. But they are largely supportive of the tax credits called for in “Build Back Better,” which would provide more than $300 billion in direct subsidies from everything from wind and solar to transmission and storage to carbon capture and nuclear.

“When it comes down to it, they are doing what anyone would do: They are trying to make sure they’re not on the wrong side of these things or mitigate any negative ideas that might be coming up,” Patterson said. “There is a tremendous amount of investment opportunity, and they want the rules written in a way that makes the most sense for them.”

He added, “My guess with Biden is they’re saying, ‘We want green stuff, we want to be partners with you, and we want to make a lot of money helping you go green.'”