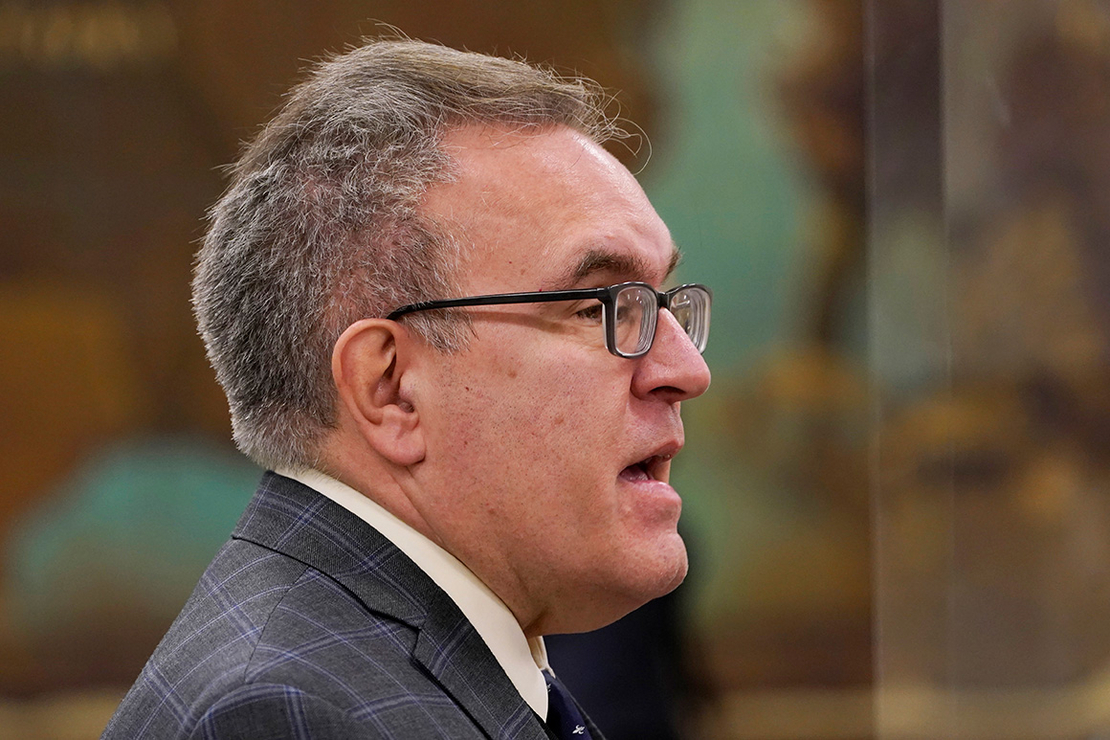 The Virginia Senate voted today to reject Andrew Wheeler, the EPA administrator under former President Trump, to be the state’s secretary of natural and historic resources.

The full Senate voted 21-19 to adopt last week’s legislative amendment from the Privileges and Elections Committee, which removed Wheeler from the list of Gov. Glenn Youngkin’s (R) Cabinet secretaries the body is confirming (E&E News PM, Feb. 1). The vote was along party lines, with all Democrats in support of Wheeler’s removal and all Republicans against it.

The move likely means Wheeler won’t be able to stay in the position overseeing Virginia’s environmental and resources agencies, where he started last month. But the Senate still has to vote on the confirmation resolution one more time before it is made final, so Republicans may have options to save him.

The vote came after an unprecedented campaign by local and national environmental groups to sink Wheeler, including hundreds of calls to senators’ offices.

If the rejection holds, it would be the first time Virginia lawmakers have rejected a Cabinet nominee since 2006, when Republicans blocked Danny LeBlanc, a former union official, to be secretary of the commonwealth under then-Gov. Tim Kaine (D).

Youngkin spokesperson Macaulay Porter said the governor is disappointed in today’s action, but he is holding out hope that the Senate will reconsider.

“The governor is disappointed in today’s vote because he was looking forward to Mr. Wheeler accomplishing great things on behalf of Virginians,” she said in a statement.

Wheeler will stay in the job until the General Assembly adjourns — likely sometime this month or next — as he is allowed to do under the state constitution, Porter said. “In the meantime, we hope the Senate will reconsider.”

Democrats, speaking before the vote, said Wheeler was extremely knowledgeable and capable, but his record in the Trump administration — including proposed budget cuts for cleaning up the Chesapeake Bay — was unforgivable.

“The governor is entitled to a presumption on his Cabinet secretaries. But at the end of the day, it’s a presumption,” Sen. Chap Petersen (D), one of the chamber’s most centrist members, told his colleagues.

“And when we’re dealing with a candidate that was part of an administration … [that] defunded the Chesapeake Bay. He dismantled the Clean Power Plan, dismantled it. It basically removed rules that were dealing with coal ash and particulate and effectively silenced scientists,” he continued.

“This secretary needs to be somebody who’s focused on preserving natural resources, not just finding ways to get around those rules.”

Sen. Adam Ebbin (D) quoted extensively from U.S. Sen. Joe Manchin (D-W.Va.), a centrist who voted to confirm Wheeler to be deputy administrator of EPA in 2018 but voted against confirming him as administrator in 2019.

“When Manchin was given a chance to vote for Mr. Wheeler again as the permanent administrator, he made it clear that he vehemently regretted that decision,” Ebbin said. “We cannot afford to make the same mistake that the U.S. Senate made.”

In a statement at that time, Manchin noted he voted to confirm Wheeler as EPA’s deputy administrator but was displeased with Wheeler’s tenure as acting head of the agency.

“He hasn’t demonstrated a desire or a will to make any meaningful progress on clean drinking water standards and has rolled back clean air standards that are directly impacting West Virginians, both concerns that I have raised with him,” Manchin said.

Wheeler was still confirmed as EPA administrator on 52 votes, with no Democrats supporting him. At 47 nays, Wheeler received the most recorded “no” votes of any EPA administrator nominee in the history of the agency (Greenwire, Feb. 28, 2019).

State Sen. Richard Stuart (R) defended Wheeler and argued that Democrats and environmentalists only oppose him because of his connections to Trump.

“He is an incredibly accomplished man. He’s done a tremendous amount for clean air and water [and] Virginia,” he said.

“But I get the politics. I understand that some of these environmental groups out there don’t like him because of who he worked for,” Stuart continued. “And that’s just a real shame. Because we have an opportunity here to confirm somebody who has the real credentials. And I’ve not heard one member in this body object to his credentials or his qualifications.”

There was a chance the GOP could get one Democrat to vote for Wheeler. That would have put the vote at a tie, which Lt. Gov. Winsome Sears (R) could have broken.

Sen. Joe Morrissey appeared to be the most likely Democrat to cross the aisle. He told The Washington Post last month he was “very much open” to confirming Wheeler.

But Morrissey voted today with the rest of his caucus to reject the confirmation.