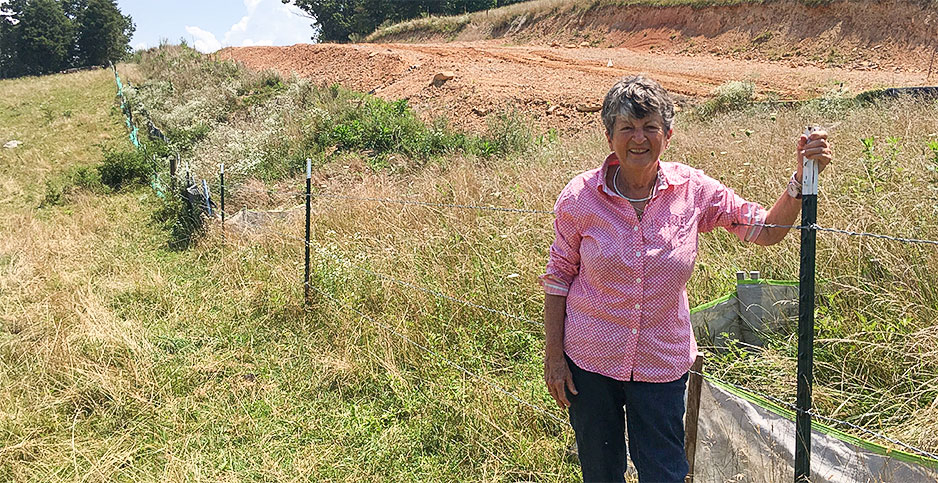 Karolyn Givens stands near the site where the Mountain Valley natural gas pipeline will soon run through the Newport, Va., farm she purchased with her husband, Clarence. Pamela King/E&E News

NEWPORT, Va. — The day Clarence Givens died, he and his wife were set to hire a lawyer to guide them through a brewing battle over a natural gas pipeline slated to pass through this mountainous farming community.

Karolyn Givens, now 77, was at her husband’s side as he was shuttled to the local hospital and airlifted to a medical unit in Roanoke. What she initially thought was a stroke turned out to be a fatal complication from a cluster of veins and arteries near the base of his brain — a birth defect he never knew he had. He died at 80 years old.

After her husband collapsed in their basement, Givens was a widow with three rural Virginia properties in her charge and a phone number at her fingertips. Knowing she didn’t want to abandon their hard-fought efforts to block the Mountain Valley pipeline from crossing their historic farm, Givens called landowner attorney Chris Johns the day after her husband died.

Since teaming up with Johns in August 2017, Givens and a host of other residents living along the 300-mile Mountain Valley project have joined calls for federal courts to address a quirk in the pipeline eminent domain process that enables pipeline developers to gain access to private property before paying to use the land.

Their plea is now before the Supreme Court, which will decide this fall whether to take up the case (Energywire, July 8).

Givens, whose name sits atop a long list of property holders on the Supreme Court challenge, has battled the pipeline on several fronts. She has attended court hearings. She has participated in protests. She has learned the ins and outs of the Federal Energy Regulatory Commission, which authorizes gas transport projects.

While she vehemently opposes Mountain Valley on all fronts, Givens’ Supreme Court battle aligns her with more conservative landowners and legal minds who also say pipeline developers do not have the right to immediate possession, or "quick take," of private property (Energywire, July 2).

"There’s something wrong with that picture," Givens said. "I haven’t received a cent, but I’m not supposed to be on the right of way? It’s my land."

Mountain Valley Pipeline LLC attorneys did not answer requests for comment for this story. A spokeswoman for Equitrans Midstream Corp., the operator behind the project, said that because litigation is pending, the company could not provide additional details.

During condemnation proceedings in the 4th U.S. Circuit Court of Appeals, lawyers for Mountain Valley invoked the court’s 2004 decision in East Tennessee Natural Gas Co. v. Sage, a case that opened the door for pipeline developers to take and use private property before paying landowners — as long as they have secured a preliminary injunction.

"[A]t bottom, [landowners’] appeals boil down to a disagreement with the FERC certificate and — avowedly — a frontal attack on this Court’s binding decision in Sage, which it asks this Court to reconsider through the extraordinary procedure of an initial hearing en banc," the pipeline builder argued in a May 2018 filing.

The 4th Circuit rejected landowners’ request for a full-court reconsideration of its Sage precedent and eventually dismissed the case.

A Supreme Court review is the project opponents’ last hope in this particular challenge. The odds are stacked against them: The justices can only review about 80 of the roughly 8,000 cases they receive each term.

Mountain Valley has until Aug. 29 to respond to the landowners’ Supreme Court petition.

‘Nothing can go wrong’

After trekking the globe for the Air Force, the Givenses settled down to raise their young children on a family farm near Blacksburg, Va.

They acquired a second property a few miles down the road here in the historic community where Givens’ husband was born. He returned to his roots on the land, raising cattle and crops with his cousin. The couple dreamed of leaving the farm to their three children.

Then came the Mountain Valley pipeline, which will soon carry natural gas from a northern reach of West Virginia to south-central Virginia. Givens said she knows the land no longer holds the same value now that construction crews are digging a path for the project through the farm. She has yet to receive any compensation for the taking.

The property Givens is now fighting to protect is just a few miles down the road from her husband’s birthplace, a house built by his great-great-grandfather. His battle to preserve the land was so crucial to him that the pipeline got a mention in his obituary.

"His most recent passion was resisting the Mountain Valley Pipeline, working to protect the historic community of Newport," the Givens family wrote in a notice of death printed in The Roanoke Times. "He had a deep love of the land, the community and his ancestry, and continued to teach those values to his children and grandchildren throughout his life."

"He was pretty quickly accepted," said Givens, who hails from a Detroit suburb. "I was not. I had to earn my way."

Givens staked her place by joining the community’s fight against the Mountain Valley pipeline. She mounted a failed attempt to block the gas line from crossing the Newport Historic District. She studied the potential for explosions along the project.

According to information from the Pipeline Association for Public Awareness, the rental property on the Givens farm is squarely in the danger zone. Givens worries the pipeline’s path through mountainous regions and unstable karst endangers her new renters, a pair of 40-year-old carpenters with a deep affection for their landlady.

On their website, Mountain Valley developers wrote that they aim to meet or surpass all state and federal safety requirements. They promised to properly maintain rights of way and to regularly inspect the line.

Givens, a trained nurse who spent the latter part of her career teaching at nearby Radford University, said she’s not convinced.

‘You don’t own anything’

Through her community work, Givens connected with Georgia Haverty, another widow and landowner in the path of the Mountain Valley pipeline.

Haverty, whose husband died in 2008, retired from her job at the Federal Aviation Administration in 2011 and left Washington, D.C., to build up her family’s land into a bustling combination apple orchard and wedding venue. She’s currently working on opening a new restaurant on the property.

The Mountain Valley pipeline will soon run under Haverty’s driveway, over to the house where her daughter, son-in-law and 6-year-old granddaughter reside.

"People don’t understand that anyone can take anything from you. And there’s not a thing you can do about it," Haverty said. "That’s one thing that’s really upset me. That’s the biggest thing I’ve learned is that you don’t own anything."

At first, Haverty said she didn’t think much about the project. But then a growing awareness of litigation around the pipeline and explosions along other gas transport lines started to gnaw at her.

Surely, she thought, someone would hold Mountain Valley’s developers accountable.

But legal proceedings around the project have felt more like box-checking than an opportunity for judicial review, said Haverty, who is listed as a challenger on the Supreme Court petition.

"If you’re just going to look at bad precedent and not look at other facts, then why even go?" she said.

Haverty said she expects all the legwork she, Givens and others have done to block the pipeline will prove useful if there is a safety incident along the line.

"That’s too late," Givens said to Haverty during a July visit to the orchard. "That’s lives. That’s the environment."

‘Quick take’ in the Supreme Court

Mountain Valley’s challengers head to the nation’s highest court with full knowledge that the justices may reject their case.

The Supreme Court, which only has time to consider about 1% of cases it receives, has discarded at least two other quick take eminent domain challenges this year.

That hasn’t stopped property law attorneys from continuing to push the court to examine the practice, which they say ignores the Fifth Amendment’s guarantee that private land will not be taken for public use without just compensation.

Lawyers who have represented pipeline companies note that appellate courts across the country have uniformly allowed them to take immediate possession of private land, suggesting there is no circuit split to spur a Supreme Court review.

One bright spot for landowners is a recent opinion from the U.S. Court of Appeals for the District of Columbia Circuit, in which Judge Patricia Millett urged her colleagues to rethink legal precedent that allows FERC to greenlight pipeline construction while simultaneously blocking property owners from challenging projects in court.

"That’s helpful because it shows one of the principles that Karolyn was standing on, which is that the pipeline process is so rigged against landowners," said Johns, the attorney representing Givens and other residents before the Supreme Court.

Millett, an Obama appointee, inserted her scathing rebuke in a decision to scrap a challenge to FERC’s approval of the Atlantic Sunrise pipeline. A lawyer representing Pennsylvania landowners along the project’s route said a petition for a full-court rehearing of that case is imminent (Energywire, Aug. 5).

Two of those property owners, Gary and Michelle Erb, were at the forefront of a separate eminent domain petition the Supreme Court ultimately rejected. The Erbs mourned the death of their hopes that their three sons would one day build homes on their land.

Givens’ battle against the Mountain Valley pipeline is marked by a different kind of loss. Taking the fight to the Supreme Court is one way she said she’ll honor the legacy of her husband of 50 years.

"We camped right there where they’re building," Givens said, recalling a family memory as she watched a backhoe clear the pipeline route through her farm. "That was the ridge. It was a lovely camping spot. We woke up one morning and fog had formed in the valley. We were above the fog, and the sun was out.

"It looked like we were flying in a plane above the clouds."