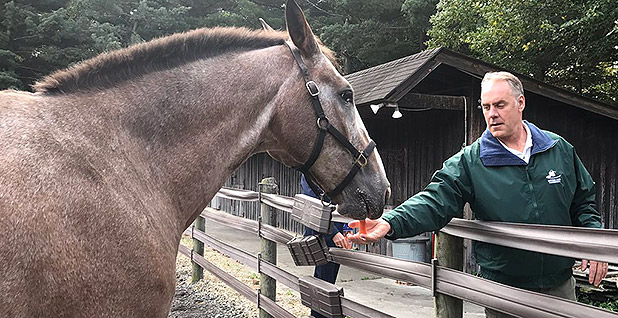 But this year, three Interior nominees, including Zinke, have been confirmed to date by the Republican-controlled Senate.

"I think it’s a problem, on a host of issues where we’re trying to figure out where to go," said Rep. Jim Costa (D-Calif.). "We’re trying to find staff that’s appointed and up to speed."

Costa cited a confusing recent episode, in which an Interior spokesman appeared to put the Trump administration on record against a controversial California water delivery tunnel proposal, only to walk back the statement several hours later (Greenwire, Oct. 26).

Congressional staffers, speaking on condition of anonymity, elaborated that the Interior vacancies can sometimes impede their search for information or policy guidance. Sometimes, one staffer said, Interior’s career-staffed regional offices can be the most reliable source.

Other times, authoritative answers may be delayed because the one informed official is out.

"The department has continued to do its work as efficiently as possible, and we are lucky to have such incredible talent in acting roles," Interior spokeswoman Heather Swift said. "However, when the secretary does not have his team in place, it forces people to juggle multiple jobs simultaneously."

Some of the nominees have lingered in a confirmation limbo that predecessors didn’t have to endure.

The Obama administration’s first Bureau of Reclamation commissioner, Michael Connor, for instance, had his committee hearing on May 5, 2009. That same day, the committee questioned Rhea Suh, nominated to serve as assistant secretary for policy, management and budget.

The Senate confirmed both nominees within a few weeks.

Trump’s picks for the same two Interior jobs likewise faced their confirmation hearings on the same day this year, July 20. The Senate Energy and Natural Resources Committee reported out each favorably by voice vote on Aug. 3 (E&E News PM, Aug. 3).

"They are just waiting for Senate Democrats to allow them to move forward," Swift said. "In the cases of every one of our nominees, they have taken longer than the previous administration or have actually set records for the longest waits thus far."

The Trump administration, too, bears some responsibility for the vacancies. Eight top Interior positions have not yet received a nominee, according to the nonpartisan Partnership for Public Service. These key spots include two assistant secretary positions and the directorships of the National Park Service and the Fish and Wildlife Service.

The delays in selecting nominees baffle even some supporters of the Trump administration, who note that seemingly favored candidates have been on hold for months.

Former Yosemite National Park Superintendent David Mihalic, for instance, was publicly identified in March as a serious National Park Service candidate (Greenwire, March 20). Mihalic has served as a "senior adviser" to Zinke since April and last week was again the topic of conversation as the potential front-runner to head the Park Service.

So far, though, no nomination has been announced, stirring speculation about whether Zinke’s fellow Montana resident faces stiff competition, White House resistance or perhaps just a clunky personnel operation that is still recovering from a slow start across the board.

"For those of us in the West, the absence of a [Bureau of Land Management] director looms large," Rebecca Watson, an energy lawyer who served as assistant Interior secretary for land and minerals during the George W. Bush administration, said today. "From the new administration’s energy policy to access to federal lands for recreation, grazing and other multiple use activities, this leadership is needed."

Of 610 key executive branch positions requiring Senate confirmation, Trump has yet to nominate 261 candidates, according to the Partnership for Public Service. These no-candidate vacancies include six at U.S. EPA and 14 at the Energy Department.

"If you don’t have staff in place, it certainly complicates your ability to get things done," Bobby McEnaney, senior deputy director of the Natural Resources Defense Council’s Western Renewable Energy Project, said in an interview. He added that the department’s "day to day obligations" appear to be moving more slowly.

Correction: Three Interior nominees, including Zinke, have been confirmed to date by the Senate. An earlier version of this story contained an incorrect amount of nominees confirmed.