Vanessa Nakate speaks out after being cut from news photo 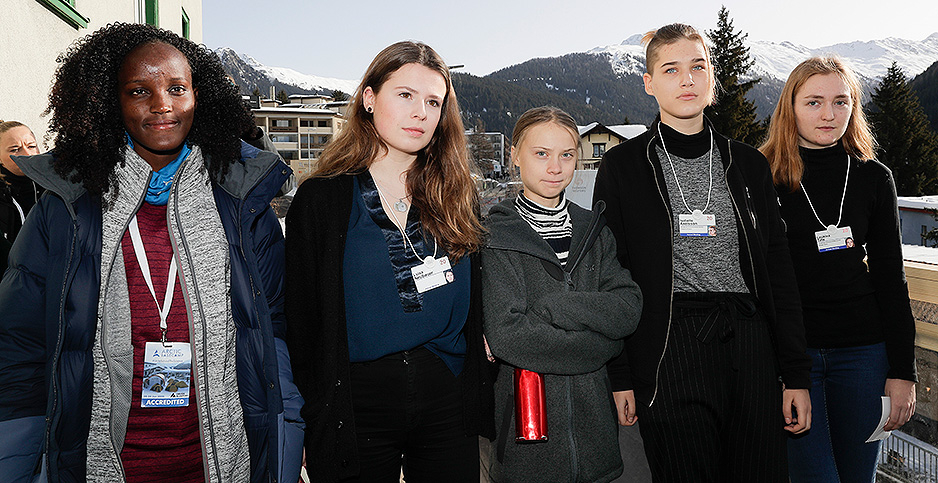 A cropped news photo of Ugandan climate activist Vanessa Nakate has sparked the latest surge of outrage over how activists of color are represented in climate movements and the media, renewing calls against the erasure of diverse voices from environmental activism.

The current controversy began when Nakate, 23, was browsing through coverage of the World Economic Forum’s Alpine summit last week. She said she noticed an Associated Press photo of youth climate activists from the summit, and, to her distress, Nakate — the only person of color in the photo — had been cropped out.

"It was, like, the hardest thing because everyone’s message was being talked about and my message was left out and my photo was left out, as well," Nakate said of the incident in a video on Twitter. "This is the first time in my life that I understood the definition of the word ‘racism.’"

Nakate, who was invited to speak with other youth organizers at the World Economic Forum summit in Davos, Switzerland, was photographed after a press conference with fellow activists Greta Thunberg, Loukina Tille, Luisa Neubauer and Isabelle Axelsson.

The Associated Press ran the image with its story of the event, but chose to run a version with Nakate cropped out of the frame — leaving in the photo only the tip of her jacket and the four other young activists, all of whom are white.

The photo prompted an outpouring of support for Nakate from social media and a firestorm of criticism against the exclusion of black, indigenous and other activists of color in climate news coverage.

"We don’t deserve this," Nakate said. "Africa is the least emitter of carbons, but we are the most affected by the climate crisis. You erasing our voices won’t change anything."

While Nakate’s photo has spurred the latest conversation, activists of color long have questioned the treatment of diversity in environmental coverage.

Just this week, Licypriya Kangujam, an 8-year-old climate activist from India, took to social media to condemn press comparisons between her and Thunberg.

"I am not doing my activism to [look] like Greta Thunberg," she tweeted. "We have [a] common goal but I have my own identity, story."

Maxine Burkett, a professor at the University of Hawaii, Manoa, who focuses on climate law and justice, said the controversy is an "egregious" example of what kinds of voices are given priority in climate change narratives.

But she said it’s nothing new.

"The global south has for decades been some of the more vocal advocates for stronger policy, stricter mitigation, greater care," Burkett said. "The very definition of what it means to be in [the] danger zone has been breached multiple times all over the global south, and that hasn’t been enough to get into the public discourse."

Nakate is the founder of a pan-African youth climate organization called the Rise Up Movement and has been actively campaigning for climate action and Congo rainforest protections. In her video reaction to the photo, she asked who would speak for Africans and other global communities already suffering the effects of climate change if voices like hers were left out of the conversation.

In response to the criticism, the Associated Press said the photo was cropped to remove a distracting building in the background behind Nakate.

The AP says it removed the cropped photo from a related news story as soon as it received more images from the photographer, including photos that included Nakate. The cropped photo itself, however, remained in circulation on AP’s commercial platform for more than a day afterward.

The AP’s initial defense and a subsequent apology, however, drew more ire from activists across the globe. Many complained that the Associated Press’ initial apology — and even headlines from other coverage about the controversy — omitted Nakate’s name.

Associated Press Executive Editor Sally Buzbee apologized for the decision and said in a statement that the AP cares "deeply about accurately representing the world" and that it has learned "from this error in judgment."

Jerome Foster II, a 17-year-old climate activist and organizer based in Washington, told E&E News that concerns about diversity span all kinds of social justice movements — from gun control to immigration reform.

"This actually spurred many more conversations and many other people coming up and stepping forward and saying that it’s very often that black and brown activists are cropped out of photos," Foster said.

"So we just want to make sure that those activists are being heard and they’re being talked about, because their stories are just as legitimate," Foster added.

‘Do you know their names?’

Several environmental experts said they were struck, but not surprised, by the incident.

Musonda Mumba from the U.N. Environment Programme said over email that there is a "missed opportunity" in cases like Nakate’s to adequately represent people who "will bear the brunt of climate change and [contribute] the least to it."

Mumba founded the Network of African Women Environmentalists to combat the lack of representation for African women at the climate change table and noted that activists like Nakate often have to leap over extra hurdles to be included.

"If you know the challenges of acquiring a visa to get out of any sub-Saharan African [country]," Mumba said, "you will realise that kids like Vanessa have gone through such scrutiny to even get to a place like Davos."

Other activists and experts have targeted press coverage of young Swedish activist Thunberg, who has dominated front pages and airwaves since she began her own climate strikes in 2018.

But, Mumba notes, young activists in the Southern Hemisphere have been vocal about climate plights for much longer with less resources. Those youth are often on the front lines of climate effects like extreme weather.

"For me, what’s problematic is when media houses have used terms like ‘The Greta of Uganda,’" she said, "which is why in my tweets I have asked: ‘Do you know their names?’"

Nigerian-born writer Chika Unigwe noted in a Guardian op-ed that "offensive" media references to other young activists in non-European nations as "the ‘Greta Thunberg’ of their country" have real-world consequences.

"This tendency of the media to present Thunberg as the one who calls, and the others existing only to heed her call, is problematic," she wrote, "especially for those black and brown activists whose media invisibility leads to invisibility to organisations whose help they could greatly benefit from."

For Foster, media erasure is not the only representation issue that needs to be addressed. He said it’s crucial to make sure organizing is happening in non-white communities and that it’s inclusive of people of color.

"We’re really trying to make sure that … we aren’t being intentionally divided and intentionally being set apart from each other, because [we] all are one movement," he said. "It’s not going to just take one people or one demographic; it’s going to take all of us at the table."

Clarification: This article has been clarified to reflect the timing of when the Associated Press removed a cropped picture of climate activists that did not include Vanessa Nakate.