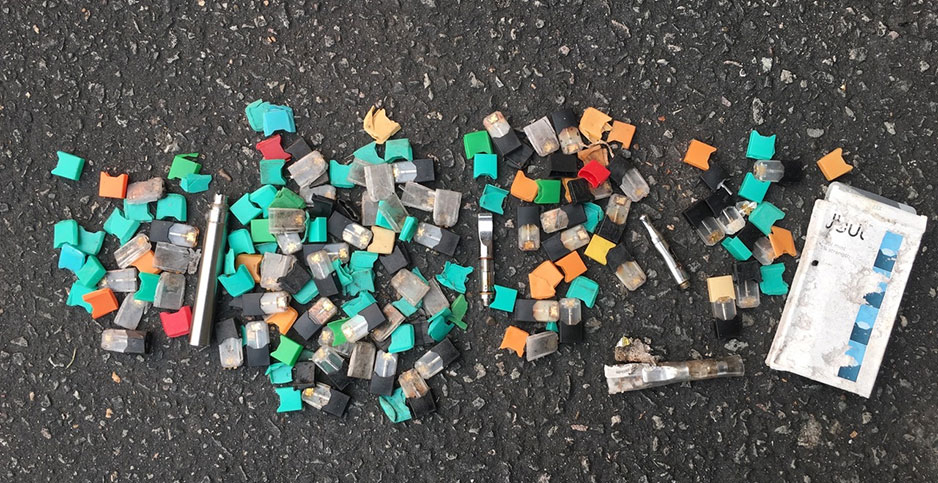 Juul and other vaping waste collected at one high school's student parking lots on one day during a research project. Jeremiah Mock

When researcher Jeremiah Mock started picking up e-cigarette and tobacco litter in a San Francisco Bay Area high school, he couldn’t believe the number of products he found from e-cig maker Juul.

"To my surprise and shock, I found Juul pods and Juul caps in the student parking lot area all over the place," he said, "and not very much other trash and very few cigarette butts."

Mock, a health anthropologist specializing in tobacco control at the University of California, San Francisco, was acting on a tip from a student when he began his investigation.

Youth vaping has skyrocketed in recent years. In 2018, about 20% of U.S. high schoolers used e-cigarettes, up from about 12% the previous year, according to a National Institutes of Health study. In response to a growing number of vaping-related illnesses, the Food and Drug Administration recently banned most flavored e-cigarette cartridges.

The rise in vaping has given way to a new set of environmental issues: plastic "cigarette butt" litter that does not degrade and other e-cigarette parts that are considered hazardous waste pose complicated cleanup quandaries.

Mock and his colleague Yogi Hendlin set out to understand the impact e-cigarette waste has on the environment.

In one-off, systematic sweeps of parking lots and exterior areas in 12 Bay Area public high schools, the team collected 893 pieces of e-cigarette, cannabis and tobacco litter. About 20% of it was e-cigarette litter, mostly Juul pods and their caps.

Mock said he is especially concerned about the plastic pods and caps, because they can degrade and seep into the environment. Inside those used pods is residual nicotine.

"Nicotine has been used as an insecticide. It’s a neurotoxin, so it’s used in rat poison," Mock said. "There’s significant potential for the nicotine residue that remains inside of discarded pods to get into the environment and harm wildlife and aquatic creatures."

Ingesting nicotine can also kill humans, which is one reason EPA cited for keeping e-cigarette nicotine on its list of hazardous waste pharmaceuticals.

The electronic Juul device itself, along with its lithium-ion battery, is another component to this e-cigarette waste management headache.

"In one product, you have a controlled substance, which has to be handled one way. And you have an electronic, which is another way. And the lithium battery, which is another way. So this is a massively problematic product for us to deal with at the back end," said Heidi Sanborn, director of the National Stewardship Action Council (NSAC), a group in California advocating for more corporate responsibility in sustainability initiatives.

Mock said manufacturers haven’t given consumers clear enough directions on how to dispose of the e-cigarette devices, batteries and pods.

Juul’s website directs consumers to treat reusable devices and disposable pods as electronic waste, which can be recycled at e-waste drop-off centers such as Staples Inc. stores.

But the California Department of Toxic Substances Control said nicotine’s classification as an acute hazardous waste means Juul pods should be disposed of differently. Ordinary consumers should take them to household hazardous waste facilities, the department said.

In an emailed statement, a Juul spokesperson said, "Juul pods are not intended to be refilled and we ask consumers to not litter."

Although Juul’s reusable devices dominate the market, more inexpensive brands are producing disposable e-cigarettes where the device and pod are a single product meant to be used just once. Both contain combustible lithium-ion batteries, which can cause fires in garbage trucks and in recycling facilities.

In California, where Juul is headquartered and where an e-cigarette waste debate is playing out in the state Legislature, batteries are also considered hazardous waste. Some municipalities have curbside battery pickup programs.

‘As California goes, goes the nation’

NSAC is helping usher a bill through the California Legislature that would not only ban single-use e-cigarettes but also forbid the sale of single-use tobacco cigarette filters. Sanborn is its leading advocate; she said the bill was her idea.

Cigarette filters, which are made of non-biodegradable plastic called cellulose acetate, are a ubiquitous source of ocean trash. Every year, cigarette butts top the list of the most commonly found marine litter in a global cleanup held by the Ocean Conservancy.

The California legislation is "the most comprehensive bill in the world" when it comes to curbing waste from e-cigarettes and tobacco, Sanborn said.

However, S.B. 424, introduced by Democratic state Sen. Hannah-Beth Jackson, wouldn’t classify disposable Juul pods as single-use cartridges. Instead, Sanborn said, they would be considered "closed systems" and granted leniency under the bill.

Juul is working with NSAC on aspects of the bill and supports this measure because its pods would avoid an outright ban, Sanborn said.

The bill would allow companies to sell reusable tobacco and e-cigarette products, including pods, as long as they are recyclable or the manufacturer institutes a take-back program for materials considered hazardous waste.

Juul has piloted recycling take-back programs with its own employees to ensure it develops "effective, innovative and sustainable solutions," the spokesperson said.

The California Senate has already passed the bill, which is awaiting action by the state Assembly’s Committee on Governmental Organization. That panel has killed tobacco legislation in the past, Sanborn said, but she hopes to build a popular campaign to help pass the bill into law by the May deadline.

One possible outcome is the committee strikes cigarettes from the bill, advancing only the e-cigarette portion. If it does pass, Sanborn believes it could set a trend for the nation.

"We’re very close to getting to the governor’s desk," Sanborn said. "And it’s California. As California goes, goes the nation."