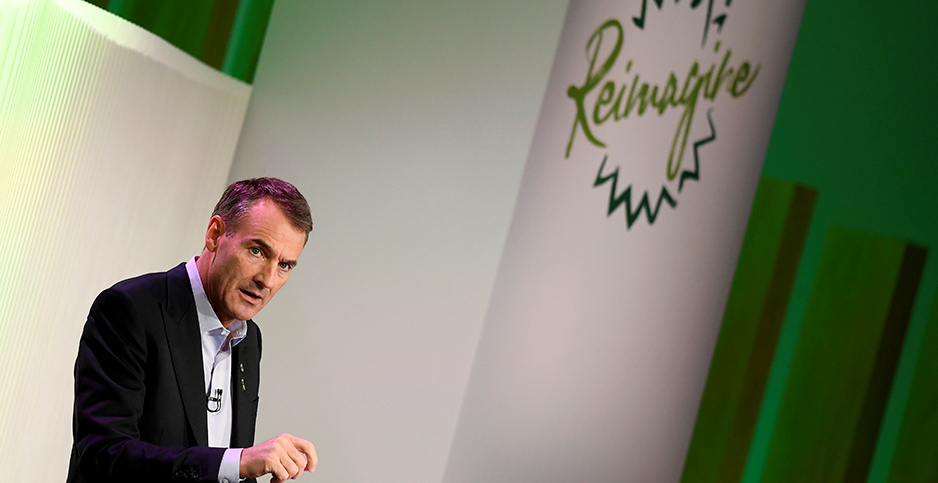 Bernard Looney, CEO of oil giant BP PLC, said while 2020 was a brutal year for the global oil and gas sector, the pandemic pushed his company to be more resilient and to "really embrace" the energy transition. Toby Melville/Reuters/Newscom

The world’s biggest oil producers, chastened by the pandemic and faced with a new U.S. administration, say they’re embracing the global energy transition, acknowledging it’s underway whether they like it or not.

It’s a change of tone from years past for the oil company executives attending the CERAWeek by IHS Markit conference, which kicked off virtually yesterday. The COVID-19 crisis slashed demand for oil worldwide, and some companies believe it may never return to pre-pandemic levels.

"The reality … is that we’ve been an oil and gas company for 112 years, and I think this is a moment where we do have to reinvent the company," said BP PLC Chief Executive Officer Bernard Looney. "First, the world has a finite carbon budget. We all know that. It’s running out. And second … society, by the way, as well as our employees, they want us to change. They need us to change. They want different things from their energy."

The shift comes as the Biden administration is rejoining the Paris Agreement to confront global warming and pledging an aggressive transformation of the U.S. energy sector. It also comes amid heavy skepticism from critics, including some investors and shareholders, who argue oil and gas companies aren’t doing nearly enough to cut down climate-warming emissions.

"We have the aspiration, we have the targets, and we’re seeing a growing chorus of leaders around the world embrace net zero as the reality that we have to hit," Andrew Light, acting assistant secretary for international affairs at the Department of Energy, said at the conference. "Is it going to be tough? Yes. … But the downside of the kind of climate change we’re going to see if we don’t do this is going to hurt all business sectors across the economy."

Light cited the unusually frigid weather that led to power outages in Texas last month as a "wake-up call for the kind of world that unfortunately we are in the process of creating right now."

Republicans have charged President Biden with putting fossil fuel jobs in jeopardy, and Light said the administration is committed to showing that tackling climate change will create opportunity.

"Climate action is job creation across the board, and no part of the American economy is going to be left behind," Light said.

Light estimated that there is a $23 trillion worldwide investment opportunity for green energy, infrastructure and technology.

American Petroleum Institute President Mike Sommers, who joined Light on a panel, noted that the oil and gas sector supports millions of jobs, even as he said the industry group "supports the ambitions" of the Paris climate accord and "looks forward" to working with Biden to address climate change.

"We can’t forget the people who are actually working in this industry, that like the jobs they have and know that those jobs are going to pay better than a lot of the jobs that are currently being advertised," Sommers said, adding that a number of unions are leery of green energy promises.

For example, API has sharply criticized the Biden administration for its decision to rescind a key permit for the Keystone XL pipeline, which would have moved crude oil from Alberta, Canada, to existing facilities in Nebraska.

Sommers said net-zero pledges at the moment "are mainly just aspirational, because for most emitters, the technology just isn’t there yet, or it’s not cost-effective to get there."

Still, he said API members are investing "billions of dollars every single year" into technologies such as carbon capture, utilization and storage (CCUS) — something Biden administration officials, including Energy Secretary Jennifer Granholm, have backed.

"We want to work with President Biden to make sure that these programs are fully funded," Sommers said. He also said API supports the direct federal regulation of methane, a policy shift the group announced in January (Greenwire, Jan. 21). Methane is a potent greenhouse gas and the primary component of natural gas.

API is also preparing to issue a statement supporting a price on CO2 emissions, The Wall Street Journal reported yesterday, in what would mark a dramatic policy reversal for the influential trade organization (see related story).

Since the end of 2019, at least eight major oil producers have pledged to reduce the emissions of carbon dioxide and other heat-trapping gases to the equivalent of zero. The change has been led by European companies including BP and Royal Dutch Shell PLC, both of which say they plan to invest in renewable electric generation and add charging points for electric vehicles to their existing network of gasoline stations.

The new energy world will require closer cooperation between producers and their customers, speakers said in a series of panel discussions. And it will rely more on government policies and subsidies, something the conventional oil and gas industry has been loath to embrace.

"I’m reasonably well convinced that the value pool we can access as the world transforms to a different energy system is going to be significantly larger if you adopt a policy of helping your customers achieve net zero," Shell CEO Ben van Beurden said.

The U.S. decision to rejoin the Paris climate agreement created a bloc of North American and European countries committed to cutting their emissions. That forced China to announce a series of emissions cuts, too, rather than face potential tariffs or other penalties, said Jeff Currie, head of commodities research at Goldman Sachs (Climatewire, Jan. 21).

"We now have a blueprint of energy transition in China and the U.S. we did not have eight weeks ago," he said.

"So what does that tell you? Making investments in long-term, long-cycle oil production is a very risky business because the clock is now ticking on oil," Currie said.

At the same time, the largest U.S. oil companies haven’t gone as far as their European peers when it comes to committing to cut CO2 emissions. The heads of Exxon Mobil Corp., Chevron Corp. and ConocoPhillips are all scheduled to speak today at CERAWeek.

And even the emissions reductions that the European producers have announced are dependent on technologies like CCUS, which has yet to be widely deployed, or nature-based offsets like tree farms (Energywire, Dec. 23, 2020).

Skeptics, though, are wary of the industry’s hefty reliance of technology to reduce its carbon footprint.

"Oil and gas companies have a long history of diverting attention from their emissions and the harm they cause. The simplest way to protect health and climate is to stop polluting," said Josh Eisenfeld, a corporate accountability communications campaigner at Earthworks, which held a press call yesterday to push the industry to take a more aggressive stance on methane pollution.

Granholm, who will deliver her first public remarks as Energy secretary tomorrow at the event, has said she believes the oil and gas industry could be doing more to transition to clean energy.

"A lot of them understand that," she told The Washington Post in an interview on her first day in office. "They are now diversifying to be energy companies rather than oil and gas companies."

She noted that Chevron recently announced it would be investing $300 million in a fund to advance low-carbon technologies: "That’s a super important piece of an opportunity for them," she said. "But clearly, it’s going to be up to them to be more responsive to this. They could be investing in battery technology. They could be investing, obviously, in biofuels, which is different. They can see where this is going. They can see that the globe is going to be demanding clean-energy solutions and carbon-zero solutions by 2050."

At the same time, some industry speakers at the conference were optimistic about the future, including the new partnerships and government mandates it may require.

The facility will likely require some kind of government subsidy to be profitable, but it could help the fuel-hungry airline industry offset its emissions in ways that can’t be achieved with other technology, United Airlines CEO Scott Kirby said.

"This can be our generation’s moonshot moment," he said.