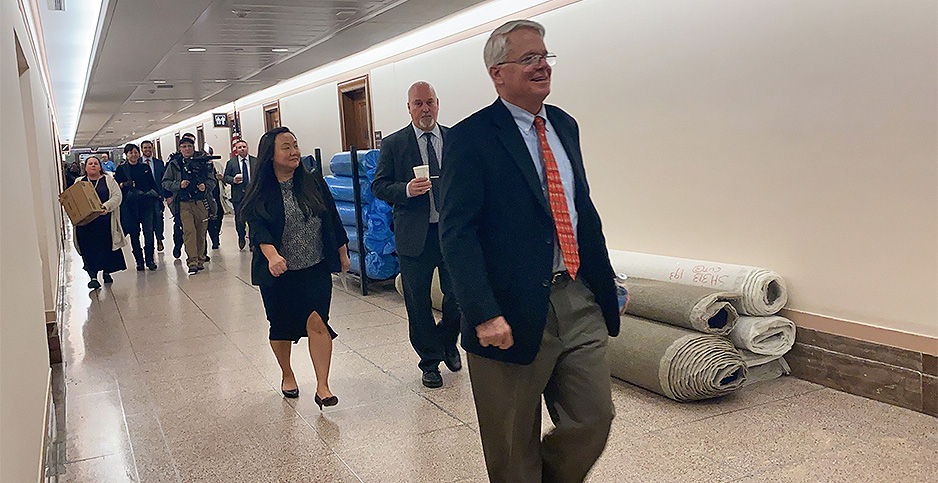 Veterans asked for full and permanent funding of the Land and Water Conservation Fund in meetings with congressional offices yesterday.

As volunteers from the Vet Voice Foundation popped in and out, some lawmakers decided to sign on to the LWCF bill.

"I met with Sen. Martha McSally, who’s my senator from the great state of Arizona," said former Army 1st Lt. Corey Harris, a volunteer. "She’s also a veteran, and we found out at the meeting that she signed on to it while we were sitting there in the meeting to support the LWCF as a co-sponsor."

McSally, a Republican, signed on yesterday as a co-sponsor of S. 1081, the "Land and Water Conservation Fund Permanent Funding Act," her office confirmed.

Harris, 44, of Phoenix, was elated. "To have my home senator jump on board, it just felt, felt powerful," Harris said. "It felt like we were able to make a difference, and that’s what all of us veterans want to do anyway."

On the House side, Democrats last month asked chamber leaders to schedule a vote on companion legislation (E&E Daily, Jan. 27).

Congress approved $495 million for LWCF in the fiscal 2020 spending compromise, but the authorized level is much higher — $900 million.

LWCF boosters say full funding would provide veterans a greater opportunity to reconnect with society after returning from the battlefield.

"We go into the wilderness to bring ourselves back together," Lodovisi said. "There’s a lot of people who are working with, through PTSD, and that’s exactly what they need."

Lodovisi said she visited the offices of Sens. Debbie Stabenow and Gary Peters, both Michigan Democrats. She said she was sure they would sign on to the bill.

"It is essential to not just recovery but really identity for many, many veterans coming home," Ball said.

"There’s two major industries that the Land and Water Conservation Fund is relying on," Martinez said. "That’s why we need to secure these funds because it’s better for our local economy."

For retired Air Force Master Sgt. Brent Lindstrom, 52, the revenue in his home state of Minnesota has skyrocketed for the outdoor industry.

"It’s an economic issue too, that if we don’t have these public lands, you don’t have people leaving their homes to go out and do this," Lindstrom said.

All volunteers wanted lawmakers to commit to the permanent funding for future generations of veterans and civilians.

Former Marine Corps member Scott Mulvaney, 62, of Los Angeles, said he hoped that lawmakers would preserve the lands that veterans "fought to defend."

"The improvement of these areas is something that any senator, any representative can be proud of," Mulvaney said.