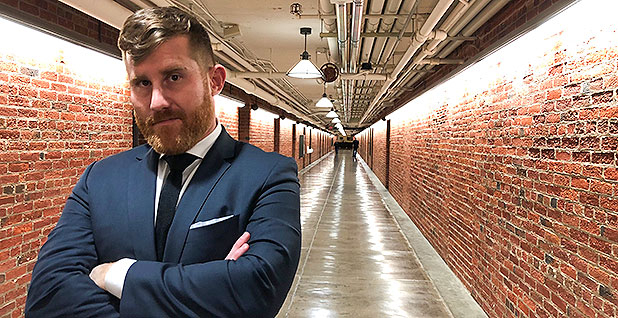 “We fought for this country --- we’d like to have a say in the money,” said Connor Mallon, 34, of Alexandria, Va., a former combat engineer in the Iraq War who wants Congress to increase spending on national park repairs. He delivered his message to congressional offices on Tuesday and is shown here in the basement of the Senate Russell Office Building. Rob Hotakainen/E&E News

Connor Mallon, a former combat engineer in Iraq, says he worked to overcome his post-traumatic stress by making a passion of photography, shooting landscapes and wildlife at Gettysburg, Muir Woods and Shenandoah national park sites.

Now he wants Congress and the Trump administration to spend more money to fix up the national parks — and he says veterans deserve to be heard.

"We fought for this country," said Mallon, 34, of Alexandria, Va. "We’d like to have a say in the money that goes into what we feel is really important in keeping our country beautiful and unique."

As veterans push for more spending on the 417 park sites, it’s a payback of sorts for the National Park Service, a federal agency that has long reached out to military families.

In Utah, they help run whitewater expeditions for veterans at Canyonlands National Park.

On Wednesday, a group of 10 veterans met privately with Interior Secretary Ryan Zinke, asking him to back a bill that would create a special federal fund to provide millions of dollars each year until 2047 to pay for more than $11 billion of park projects.

"We have these beautiful parks — these beautiful national parks that people want to go to and visit — and that’s worth fighting for," said Robin Eckstein, 40, of Portland, Ore., who joined the Army as a truck driver in 1999 and went to Iraq in 2003, driving supply convoys in and around Baghdad.

Eckstein said the things she saw on the battlefield "sucked a little bit of the humanity out of me and made me harder and angrier." But she said she relies on parks and wilderness for help, recalling a dayslong hike in Colorado this summer that left her feeling "just bliss."

Eckstein, one of the 10 veterans who got a chance to meet Zinke, said she thought that "he genuinely heard us."

"I specifically told him about how the national parks have a very healing effect for veterans — myself included," she said.

Zinke, a former 23-year Navy SEAL and the first veteran to lead the Interior Department since Stewart Udall left the post in 1969, is sympathetic to the arguments.

"I want these warriors to be able to return home from their service and enjoy the very lands they fought to protect," Zinke said after hosting the first-ever "public lands access for veterans" event at the Interior Department on Oct. 26.

After meeting with the group on Wednesday, Zinke told reporters that dealing with deferred maintenance at the parks is a top priority for him and that it should not be "a Republican or Democrat issue."

"Our public lands are an American issue," Zinke said. "I’ve always said that there are two things that we need to fund absolutely as a country: our military and our parks. The rest of it’s a grand debate."

As an example of the neglect, Zinke cited Arlington House, the nation’s memorial to Robert E. Lee at Arlington National Cemetery, with its broken windows, dangling shutters and badly peeling paint. Aided by a $12 million gift, NPS in 2014 launched a multiyear project that called for new glass doors and brick pavers, a new electrical and lighting system, and restoration of the grounds, gardens and slave quarters, among other things.

"It is my priority to fix our parks," Zinke said. "But if you want to look at where we are on infrastructure, take a look at Arlington. … It is on hallowed ground, and that facility should never, ever have atrophied and deteriorated to the point it did — and that’s a national disgrace. We’re going to fix it. And we are going to fix it because I think a great nation should have great parks and great facilities to go along with it."

Marcia Argust, who heads a campaign to restore national parks for the Pew Charitable Trusts, said veterans are a natural constituency to lobby for park repairs. She said about one-third of the park sites commemorate military history, including 25 battlefields and 14 national cemeteries, accounting for roughly $6 billion of the maintenance backlog.

"That’s a huge stake for veterans who have fought for American values," she said. "They want to make sure those places are maintained and restored for future generations."

The veterans who met with Zinke gave him a letter signed by more than 500 veterans and organizations, citing a long list of parks that need fixing. They include Vicksburg National Military Park in Mississippi, where 17,000 Civil War Union soldiers are buried; the Fort McHenry site in Baltimore, which served as the inspiration for "The Star Spangled Banner"; and iconic sites in Washington such as the World War II Memorial and the Vietnam Veterans Memorial.

Angel Gual, an Air Force veteran from Hollywood, Fla., and another of the 10 who met with Zinke, said he’s particularly worried about Fort Jefferson at Dry Tortugas National Park, which he described as a "mostly forgotten" park in the Gulf of Mexico, roughly 70 miles from Key West.

"It’s a phenomenal place, with crystal blue waters," he said. "But it’s falling apart, and it needs some real attention. … We need to help fund these parks before they’re shut down and no one gets to access them. It’s our history."

Last month, Zinke announced a controversial plan to raise $70 million a year for deferred repair projects by more than doubling peak-season entry fees at 17 of the most popular parks.

The proposal set off a quick backlash on Capitol Hill, with 14 senators urging Zinke to reconsider. And many veterans said they’re skeptical, as well.

"The hike rate is too much too fast — it’s going to price some people out of the parks," Eckstein said.

Eckstein and the 500 who signed the letter want Zinke instead to get behind the "National Park Service Legacy Act," which would require Congress to set aside money for park repairs for each of the next 30 years.

Under bills introduced in both the House (H.R. 2584) and Senate (S. 751) earlier this year, contributions to the fund would ramp up over time, from $50 million a year in 2018 through 2020 to $500 million a year in 2027 through 2047. Backers of the legislation want to pay for it with revenues from oil, gas, coal and other mineral operations. And it would give Congress the authority to review all proposed maintenance projects.

Mallon spent all day Tuesday pitching the bills to congressional offices, lobbying for the first time in his life. He now works for a group called the Mission Continues, a nonprofit organization that aims to help veterans adjust to life at home by getting them involved in "community impact" projects.

One of 13 veterans who made the rounds on Capitol Hill, Mallon said he "struggled with reintegrating" and had to find a way to deal with his anger after serving in the Army for six years.

"It took me a long time to learn how to get past that and not blame the world for everything," he said.

But with those challenges behind him, Mallon said he now wants to use the skills he learned in the military and his desire to serve in a new, positive way. For him, that means promoting national parks, which he called "a true national treasure" and worthy of preserving for future generations.

"If we don’t start now, we’re just going to hand them a pile of rubble," Mallon said. "I would love to see Congress bump this up on their priority list. We’ve neglected this for so long."

Zinke made plans to ride a horse at Manassas National Battlefield Park in Virginia today and help wash the wall of the Vietnam Veterans Memorial in Washington tomorrow as a way to honor veterans.

Zinke paid tribute to the 11,000 veterans who work in his agency at a special event at the department’s headquarters Tuesday.

"As veterans, we owe it to our fellow veterans to reach out," he told them.

And he offered them some advice: "Be a mentor, be a friend, take a veteran to lunch and talk about the issues. … Veterans are a family. We are a family."

On Wednesday, Zinke went to the Vietnam War memorial to read the names of 60 members of the military who died, joining an effort by hundreds of volunteers to read all the names of the fallen and to mark the memorial’s 35th anniversary.

Zinke, the first SEAL elected to the U.S. House, had a long list of events planned to mark the long holiday weekend.

In addition to his horse ride today, Zinke planned to fire a Civil War cannon, do a service project with Boy Scouts and attend a briefing on the maintenance backlog facing the national parks, according to Heather Swift, Zinke’s spokeswoman.

In honor of Veterans Day, all national parks will offer free admission today and tomorrow. They’re the last two of 10 free-entry days approved by NPS for 2017.

Active military members and their dependents can get free annual passes, while disabled veterans qualify for free lifetime passes.