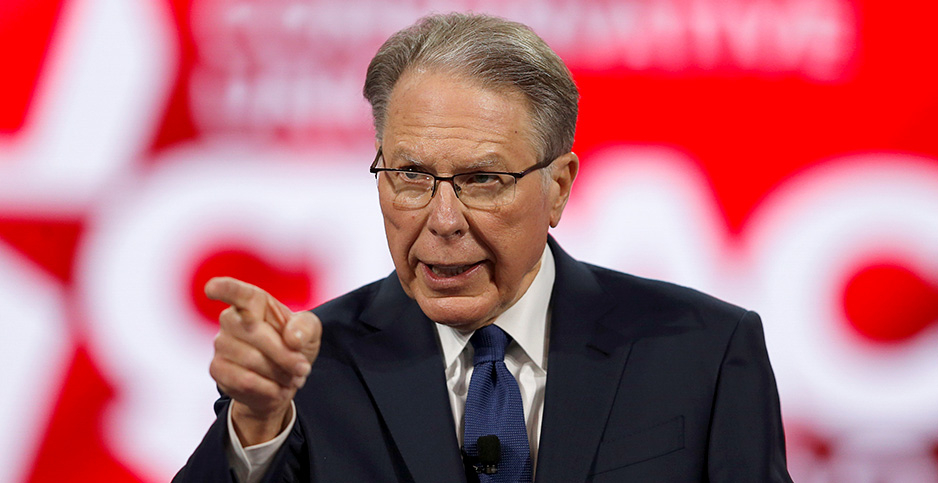 NRA leader Wayne LaPierre has come under fire after the release of a 2013 video of a bungled, but legal, shooting of an elephant in Botswana. Joe Skipper/Reuters/Newscom

An 8-year-old video of a legal but badly bungled shooting of an African savanna elephant by National Rifle Association Executive Vice President Wayne LaPierre has surfaced at a vulnerable time for the organization and its longtime leader.

The 2013 video, taken in Botswana, shows LaPierre wounding but repeatedly failing, even at close range, to finish off the elephant.

"Where are you telling me to shoot?" LaPierre asks the guide at one point.

The video shows the guide approaching the elephant and pointing at an ear.

Another hunter then nails the fatal shot.

The nearly 10-minute video, reportedly taken for an NRA-sponsored television show that never aired, was disclosed by The New Yorker magazine and the Trace, a nonprofit news organization that covers gun violence in America.

With the financial support of the Everytown for Gun Safety Support Fund, among myriad other groups and individuals, the Trace has aggressively reported on the NRA’s bankruptcy proceedings and litigation in which discovery and court filings have illuminated the NRA’s inner workings.

An NRA spokesperson could not be immediately reached late this morning. But in a statement to The Washington Post, the group emphasized the hunt was legal, saying "the video offers an incomplete portrayal of the experience — and fails to express the many ways this activity benefits the local community and habitat."

The organization’s critics, though, seized upon the LaPierre hunting video that depicts the drawn-out death of the savanna elephant in Botswana’s Okavango Delta region.

Botswana is home to an estimated 130,000 elephants, the world’s largest population of the pachyderms.

The International Union for Conservation of Nature last month characterized the African forest elephant as critically endangered and the African savanna elephant as endangered. The two species previously had been grouped together as a single species and were classified as vulnerable by the IUCN (Greenwire, March 25).

Africa currently has 415,000 elephants, counting the forest and savanna elephants together, according to the IUCN.

"We must urgently put an end to poaching and ensure that sufficient suitable habitat for both forest and savanna elephants is conserved," Bruno Oberle, IUCN director general, said in a statement last month.

But regulated trophy hunting also has proven benefits for the African country, a University of Botswana tourism studies professor told an Interior Department advisory panel in 2018.