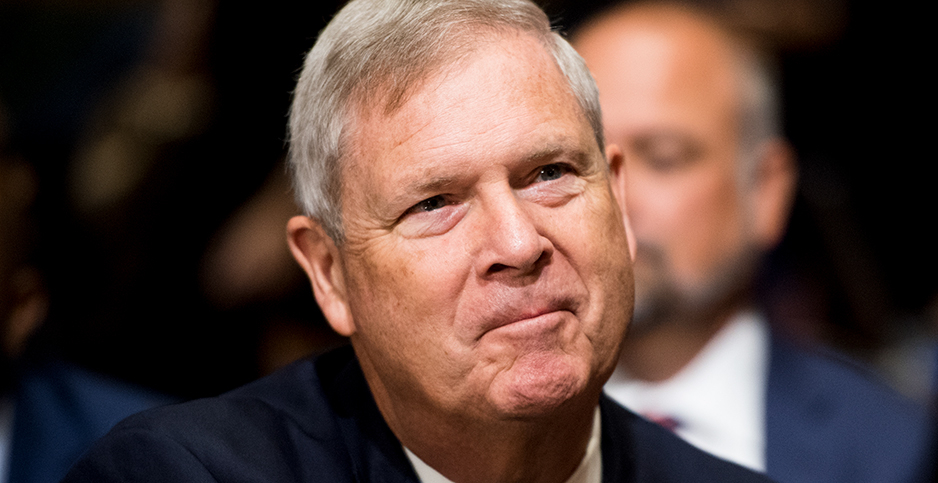 Some progressives are unhappy with talk of former Agriculture Secretary Tom Vilsack being offered the job once again under the Biden administration. Bill Clark/CQ Roll Call/Newscom

The field of potential candidates for Agriculture secretary has a new sore spot, and he’s had the job before.

Tom Vilsack, a top agriculture adviser to President-elect Joe Biden and Agriculture secretary in the Obama administration, is stirring a fresh debate after news reports that he’s a strong contender for the Cabinet post.

Opposition has begun to mount from groups that say they’d rather see Rep. Marcia Fudge (D-Ohio) or another candidate less connected to corporate agriculture.

The Center for Food Safety complained yesterday about the prospect, knocking Vilsack for his support of genetic engineering and other principles of industrial food production.

In a statement, CFS Policy Director Jaydee Hanson called the possibility "a huge step backwards in our urgent need to support agricultural systems that protect public health, the environment, and mitigate the ongoing climate crisis."

Hanson added, "While serving as Secretary under President Obama, Mr. Vilsack supported chemically-dependent industrial agriculture that resulted in millions more pounds of pesticides released into the environment, contaminating our water and soils and harming human health and wildlife. In addition, during his tenure the meat industry grew larger and more concentrated, contributing to the climate crisis."

The group’s opposition came on the heels of criticism from Food & Water Watch, which called him a "very bad pick" and labeled Vilsack a "friend of Big Ag" after Politico reported he may be in line for the position.

After the Obama administration ended, Vilsack became president and CEO of the U.S. Dairy Export Council, which may reinforce the groups’ impression.

Criticism of Vilsack reflects the conflicting priorities Biden faces in picking an agriculture chief. Fudge, from an urban district, is Black and has been outspoken about the needs of low-income communities that rely on Agriculture Department nutrition programs, and Biden faces pressure to appoint a diverse Cabinet.

Vilsack may be a more conventional choice as a former Agriculture secretary and governor with established rural ties.

Complaints about Vilsack from such groups isn’t new. They voiced little support for him during his eight years as secretary under Obama, expressing the same concerns that he was too close to big agribusinesses, like Monsanto Co.

More recently, the Real Organic Project blamed Vilsack for not doing enough to promote organic agriculture, picking a midlevel manager at Driscoll’s Inc. as a "farmer representative" for the National Organic Standards Board.

On the other hand, Vilsack promoted local and regional farm and food systems that have helped during the pandemic and opened opportunities for beginning and socially disadvantaged farmers, said Ferd Hoefner, senior strategic adviser at the National Sustainable Agriculture Coalition.

The Trump administration hasn’t ended those efforts but hasn’t enhanced them either, he said.

Although Vilsack endorsed Sonny Perdue for Agriculture secretary after President Trump was elected, he’s had more criticism for the administration of late.

He was particularly critical of EPA’s granting of small refinery exemptions under the renewable fuel standard and of the administration’s support of assistance to the refining industry.

"This is unconscionable," Vilsack said in an opinion article in The Des Moines Register on Sept. 21, saying the money could have been put to use in disaster assistance or other local rural needs.

"Couldn’t $300 million of taxpayer funds be better invested in helping farmers hurt by the derecho, drought, or the trade war, in assisting rural communities devastated by the pandemic, in helping feed struggling and low-income rural families, in fixing crumbling infrastructure or expanding rural broadband?" he asked.