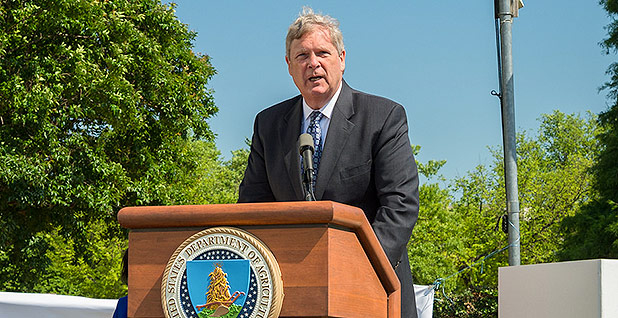 Skeptics calling for a more cautious approach to genetic engineering in agriculture may be disappointed in the Department of Agriculture’s incoming leadership: Tom Vilsack has been looking to speed it up.

Vilsack, whom President-elect Joe Biden picked for secretary of Agriculture, worked to accelerate USDA’s work on biotechnology when he had the job under President Obama, and he reinforced that goal in congressional testimony last year as a dairy industry executive.

He’ll get a chance to deliver next year, when a revamp of biotechnology regulations crafted under Agriculture Secretary Sonny Perdue takes effect, potentially shortening the timeline for traits that help crops fend off insects or withstand drought and other effects of climate change.

"It takes a long time — too long, too long — in this day and age of massive change and rapid change," Vilsack told the Senate Agriculture, Nutrition and Forestry Committee, as president and CEO of the U.S. Dairy Export Council, at a hearing on agriculture’s role in responding to climate change. "We need to streamline the process without sacrificing the quality of their review."

In response to questions from Sen. John Boozman (R-Ark.) — who’s poised to become chairman of the committee next year — Vilsack said biotechnology approvals took 90 months when he arrived as secretary in 2009. He aimed to reduce the timeline to a year and managed to bring it down to 18 months, he said.

A USDA spokesperson told E&E News that reviews take 15 months on average now, and officials expect a shorter timeline as the new regulations phase in beginning April 1 for corn, soybeans and other crops.

In addition to the work on bioengineering for crops, USDA is moving toward asserting more authority over the development of livestock with biotech traits. The department today issued a notice of proposed rulemaking to switch some of those responsibilities to USDA from the Food and Drug Administration.

USDA will continue to consult with FDA for expertise, the department said. USDA reviews would cover a wide range of issues such as zoonotic diseases, food safety and environmental considerations.

Biotechnology has major implications for food production and for the environment, in how both plants and livestock are produced and managed. More productive crops don’t need as much land, and crops designed to be unpalatable for insects, for instance, don’t need as much pesticide.

The technology has consumer-based benefits, too, proponents say, such as creating apples that don’t brown when exposed to the air.

Vilsack is something of a hero to the biotechnology industry. Citing his work both as Iowa governor and Agriculture secretary, the Biotechnology Innovation Organization (BIO) last year gave him its annual George Washington Carver Award.

"Secretary Vilsack has been a leader in growing the bio-based economy," said Dana O’Brien, executive vice president for food and agriculture at BIO, an industry group.

According to the group, gene editing for seed improvements can boost crop production while reducing carbon emissions and saving water — as well as adding up to $100 billion in farmer income.

The new regulations set up a process for USDA to review — or not review — new technologies, based on possible risks from introducing genetically modified crops into the environment. Among other changes, the rule would exempt traits that could have been achieved by more traditional breeding but were faster to introduce through biotechnology.

In some cases, traits that already exist through one line of genetic engineering — such as resistance to the weedkiller glyphosate — could sidestep the regulation if a slightly different version has already been approved for the same gene.

The end result, advocates say, will be to speed the arrival of improved crops that don’t pose environmental risk.

Critics, such as the Center for Science in the Public Interest, say the new regulations are too loose by allowing companies to determine for themselves that the genetic traits they’ve designed are exempt from USDA review.

In an October blog post, CSPI’s biotechnology director, Greg Jaffe, said he had lingering concerns about the regulations.

Because biotech developers aren’t required to seek USDA’s determination about exempting their products from regulation, Jaffe said, it’s not clear whether companies will do it voluntarily. Multinational companies seeking broad markets will likely want USDA’s confirmation, but small and midsize companies might not, he said.

Other groups say they worry how genetic engineering may affect the organic industry and that USDA has been too willing to allow biotechnology into that aspect of agriculture. Still others, such as the National Grain and Feed Association, have raised worries that swifter acceptance of bioengineering may hurt trade with countries that don’t embrace it as easily.

USDA, through its Animal and Plant Health Inspection Service, dismissed that concern in releasing the final rule.

"Trading partners that have understood and accepted our regulatory system will not find our updated approach to meeting the same objectives confusing," APHIS said. "Thus, we do not see this revised system as less compatible with those of our trading partners than in the past."

The regulations, made final last summer, followed an executive order from President Trump in June 2019 prodding the department to advance biotech.

The top biotech crops in the world are soybeans, with 237 million acres in 2018, and corn, with 145 million acres, according to the International Service for the Acquisition of Agri-biotech Applications. Each is approved for import in more than a dozen countries.

The Organic and Natural Health Association warned last year that the proposed regulations were just as flawed as those already in place, giving too much leeway to the technology industry.

"USDA’s Animal and Plant Health Inspection Service (APHIS) has created a new proposed regulatory paradigm that abdicates its responsibility to consumers by permitting developers to exempt themselves from regulation and allow for self designation of genetically engineered organisms as safe," the organization said in comments to the agency.

The organic group said all genetically engineered organisms, whether animal or plant, should be subject to assessments of human and environmental effects before being allowed on the market.

But progressive groups have bristled, saying Vilsack is too closely tied to industrial agriculture — a charge that may linger as he manages the coming wave of biotech advancements.

O’Brien, at BIO, said his organization has invested in public education to reassure consumers about bioengineered crops. "We embrace skepticism," he said.