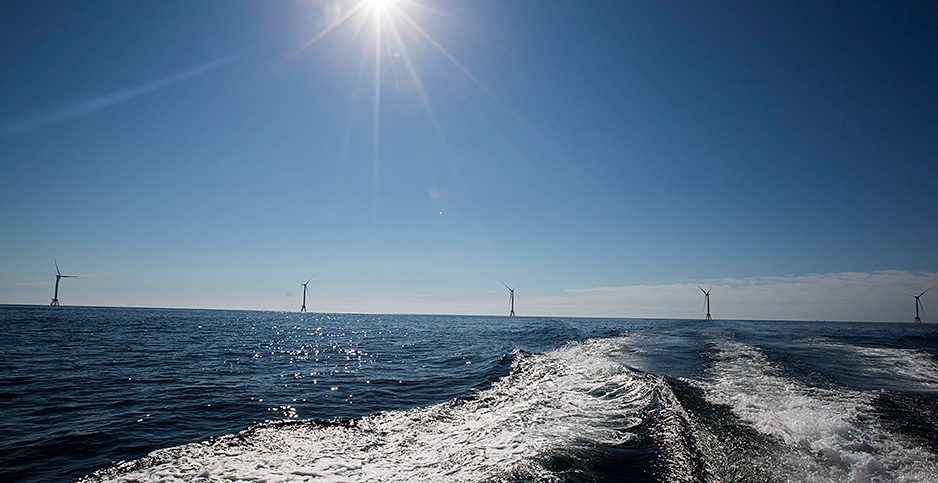 The Block Island wind farm is pictured off the coast of Rhode Island in 2016. The Interior Department yesterday approved the much larger Vineyard Wind project off the Massachusetts coast. Scott Eisen/Getty Images

With the approval of the nation’s first major offshore wind development, the Biden administration gave the industry a victory yesterday. But the battles over projects may not be over.

Close observers anticipate that other ocean users, notably fishermen, could try to stand in Vineyard Wind’s way, raising the question of whether lawsuits could create drag on President Biden’s offshore wind ambitions.

"The issuance of the [Vineyard decision] may represent a significant regulatory achievement, but we expect project opponents (e.g., coastal landowners and commercial fishermen) to file legal challenges," wrote research firm ClearView Energy Partners LLC in a note to clients yesterday.

The Interior Department’s record of decision is the final step for the 62-turbine project off the coast of Martha’s Vineyard, Mass., which could kick off an offshore wind boom under the Biden administration (Greenwire, March 29).

Shortly after the approval was published, however, the Responsible Offshore Development Alliance, a fishermen’s group, blasted the approval, calling it "a scattershot, partisan, and opaque approach."

Annie Hawkins, executive director of RODA, said she couldn’t speculate on whether the group would sue the administration over Vineyard. But she noted her members didn’t believe that the adjustments in the final approval made sufficient concessions that fishermen believe are necessary.

Biden administration officials — who have championed offshore wind as a key player in their renewable energy goals — offered a different perspective, saying the work on the project can be used to inform other offshore wind reviews. Biden has committed to approving 16 projects by 2024, a huge increase over the two small pilot projects off the East Coast right now, and standing up 30 gigawatts of offshore wind power by 2030 (Energywire, March 30).

Commerce Secretary Gina Raimondo told reporters yesterday that she’d witnessed offshore wind work well for the economy and for workers in Rhode Island, where she was governor, as the Block Island wind farm was being built.

"If you think about how complex it is to erect a wind turbine in the middle of the ocean: You need engineers, you need operating engineers, you need laborers, you need electricians, plumbers, pipe fitters, and they have to be highly trained, highly skilled," she said. "It’s actually very dangerous work, and it’s skilled work. But they’re good, high-paying jobs."

Amanda Lefton, Bureau of Ocean Energy Management director, said in a call with press that lessons learned from Vineyard would help the other offshore wind developments seeking federal approval. She added that Vineyard’s environmental review had included a "very robust outreach process" to other ocean users like commercial fishermen. She promised more of the same.

"We know that as offshore wind continues to advance in the United States that doing even more to work with ocean users, the commercial fishing industry included among them, is going to be incredibly important to ensure that we are moving forward in a manner that is expeditious but also responsible," she said.

Delayed several times by the Trump administration, Vineyard is now scheduled to close financing this year and connect to the grid by 2023. The 800-megawatt project should have the capacity to power 400,000 homes.

"It’s been a long road," Vineyard CEO Lars Pedersen said in a call with reporters yesterday. "We are at the end of one phase of this project, the development and the permitting. We are looking forward to now moving into the phase where we can actually start building the first large-scale offshore wind farm in the U.S."

A statement from former President Trump yesterday illustrated the hostility he often expressed toward offshore wind, though Trump officials maintained the president’s opposition was not the reason Vineyard faced setbacks.

"Congratulations to Martha’s Vineyard in Massachusetts for the privilege they will have in looking at massive windmills that have been approved by the Biden Administration and are being built, in China of course, as part of an extraordinarily large wind farm," Trump wrote in a statement emailed out last night. "Wind is an incredibly expensive form of energy that kills birds, affects the sea, ruins the landscape, and creates disasters for navigation."

The concerns of both fishermen and nearby residents worried about potentially unsightly wind turbines were a key factor in the earlier collapse of the Cape Wind development in state waters off the coast of Massachusetts. That project sank in 2015 when utilities pulled their support after years of tumult and a barrage of lawsuits. The Vineyard project is farther from shore, has cleared several layers of local permitting and has committed to local investments.

With the Biden administration’s focus on renewable energy, however, offshore wind could be entering a new era. It has the potential to be a critical lever for Biden to meet his broader climate goal of reducing greenhouse gas emissions by 50% to 52% by 2030 and reaching a carbon-free electricity grid by 2035.

‘Short of where we should be’

Hawkins, with RODA, the fishermen’s group, said her members didn’t see any of the concessions they had sought in the final decision released by the Interior Department yesterday.

RODA had advocated for 4-nautical-mile-wide transit lanes to crisscross the wind energy area where Vineyard will be located. It also criticized a Coast Guard study published last year that found the 1-mile separations in the Vineyard layout would be sufficiently safe for navigation.

RODA sent a letter, signed by 1,700 individuals from the fishing industries, to BOEM last month, listing a dozen mitigation efforts it wanted for the project. Instead of the 4-mile lanes, however, the record of decision approved 1-mile spacing between turbines along an east-to-west configuration.

Hawkins also criticized the mitigation efforts that are listed in the decision — many of which are voluntary commitments from Vineyard — as lacking teeth.

The Vineyard record of decision includes a promise from NOAA Fisheries and BOEM to work together on a broad impact analysis of offshore wind on fishing stocks and the surveys conducted by the federal government.

E&E News has previously reported that regional NOAA experts were at loggerheads with Interior staff over whether annual fisheries surveys they conduct in the northeast Atlantic would be disrupted by the build-out of wind turbines. This discord contributed to then-Interior Secretary David Bernhardt stalling the Vineyard review in 2019 shortly before it was first expected to clear federal permitting (Climatewire, March 22).

The record of decision reiterates earlier findings that surveys will face "major adverse impacts" from offshore wind projects and states that NOAA and BOEM can collaborate to respond to those effects on a broad scale.

Hawkins said the promise that agencies would work together was vague.

"It doesn’t say anything as far as I’m concerned. To wait until this point to say, ‘Let’s talk about working together collaboratively.’ It’s so far short of where we should be," she said.

Pedersen, of Vineyard, downplayed the potential threat of lawsuits in a call with reporters yesterday. But he stood up for the many layers of federal environmental analysis that went into the record of decision.

"It’s not something we have control of. If someone wants to bring litigation, it would be against the federal government," he said.

He added: "The [legal] risk there is that things have not been studied or haven’t been addressed. And I think we feel very, very comfortable — at least through this extremely thorough process — [that] everything has been analyzed and addressed."

Pedersen also noted that Vineyard, a joint venture of Avangrid Inc. and Copenhagen Infrastructure Partners, has bargained a $16 million fund with Rhode Island and a similar sum for Massachusetts to offset potential revenue losses for fishermen.

"We hope that fishing and offshore wind can coexist, and we believe it can be done," Pedersen said.

With Vineyard’s review complete, the industry has "turned a corner," Pedersen added. The next step, he said, is figuring out what coexistence will look like in the U.S.