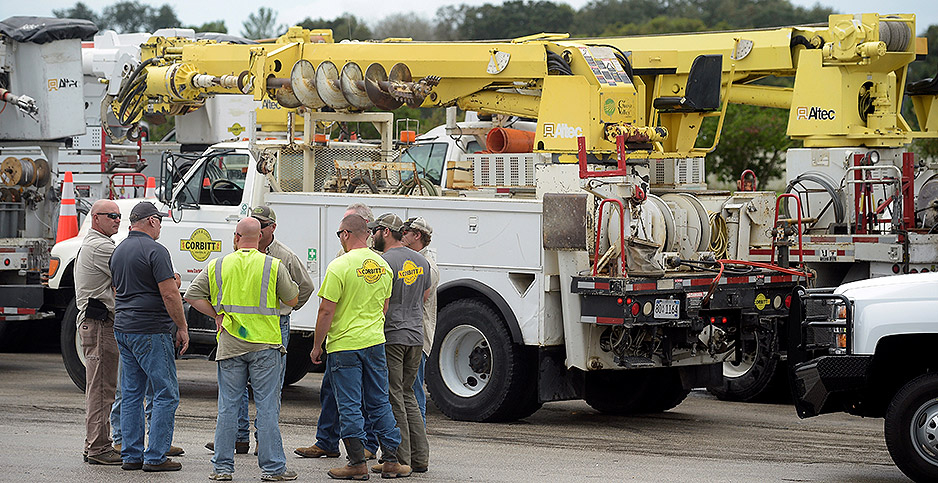 Utility workers gathering before the arrival of Hurricane Matthew in Florida in 2016. With the coronavirus pandemic, the industry is grappling with how to replace worker camps and hold in-person meetings that were critical in the past to restore power after storms. Phelan Ebenhack/REUTERS/Newscom

The Atlantic hurricane season officially starts today — and it’s occurring as the electricity sector faces one of the deadliest pandemics in decades because of the novel coronavirus.

That is raising questions about how to protect U.S. utility workers who typically must be in close proximity to restore power and repair damaged infrastructure after powerful storms.

"We’re literally writing the book on the COVID-19 response as we live it," said Scott Aaronson, vice president for security and preparedness at the Edison Electric Institute, which represents U.S. investor-owned electric utility companies.

A foundation of storm restoration work, for example, is the base camps that electric companies build. These tent cities serve as staging areas to park utility trucks and pick up transformers, wires and other equipment to restore power or rebuild parts of the power grid.

Workers also typically gather there for safety briefings and meals, and in many cases, it’s where they sleep. Federal and local health and safety guidelines will now change all of that.

Meetings and safety briefings likely will be smaller or done virtually. Anything on paper will get transferred to a remote device.

EEI developed a resource guide for the electric power industry on the pandemic with the Electricity Subsector Coordinating Council (ESCC), a high-level committee of power-sector CEOs that works with federal security officials. But those plans may need to change as the pandemic evolves, according to Aaronson.

In the interim, the electricity industry has been doing storm drills, gathering supplies and making other preparations to repair and restore a hurricane-wrecked power grid. This year the storm playbook involves wearing face masks, virtual safety briefings and traveling separately to job sites.

"Every one of our companies has had logistics plans, we’re just adapting them to the current context," said Stan Connally, executive vice president of operations for Southern Company Services Inc., a unit of Atlanta-based Southern Co., during a media briefing with Aaronson last week.

Electric companies have long-standing regional and nationwide agreements so they can assist one another when the job is too great to do alone. Under those plans, line crews climb into utility trucks and caravan to another state to help colleagues set poles, string wires and install transformers to get the lights on.

To be clear, each electric company is equipped with the crew and supplies to restore power itself. But time is of the essence when it comes to electricity, and the work gets done much faster when companies combine forces.

"We operate one big machine — the energy grid of North America — and because of that common cause, we have to work together," said Aaronson. "This industry is rooted in continuity and contingency planning because we don’t have the luxury of not being operational."

The planning comes as NOAA is forecasting a 60% chance of an "above-normal" hurricane season (Greenwire, May 21).

That means three to six major hurricanes with winds of 111 mph or higher are likely for the storm season that starts today and runs through Nov. 30.

Along with moving away from crowded base camps and shifting safety briefings online, the industry is grappling with how to protect workers going to and from the job during hurricane season.

Under the EEI protocol, crews will travel one to a car, utility truck or bucket truck. Face coverings and other personal protective equipment are a must for jobs that cannot be done with social distancing.

And contact tracing is in place in some form. This practice is intended to help track the interactions of infected people in hopes of slowing the spread of the coronavirus.

"As companies are receiving resources from around the country, they need to account for where those people are going to be and where those crews are," said Aaronson. "Those donating crews also have in place their own protections from contact tracing."

Utilities — both the ones hosting and the ones assisting — are responsible for screening their workers and asking them to not be on the job if they do not feel well. If someone displays COVID-like symptoms or tests positive, then contact tracing will be used to protect other workers.

The ESCC and EEI’s members are working with federal agencies including the departments of Energy and Health and Human Services to ensure enough tests are available, Aaronson said.

At New Orleans-based Entergy Corp., if job conditions change and crews cannot maintain social distancing, they are encouraged to stop working, according to Eli Viamontes, the company’s vice president of utility distribution operations.

Entergy provides regulated electricity service in parts of Arkansas, Louisiana, Mississippi and Texas and is well-versed in restoring and repairing power grids after major hurricanes. But Viamontes warned that restoration times may be longer this season.

"It is important to remember that due to the additional safety measures we must take because of the COVID-19 pandemic or an inability to secure enough offsite resources, restoration times may be extended, especially if there are widespread outages," Viamontes said in a statement.

CenterPoint Energy Inc. — which is based in hurricane-prone Houston — told E&E News it expected to be able to travel to aid other utility companies and that other utilities could travel to CenterPoint’s region to help with potential hurricane-related outages if needed. Houston saw widespread flooding in 2017 after Hurricane Harvey hit Texas, though other storms have caused more wind-related damage.

"Hurricanes are unpredictable, which makes it hard to anticipate the impact to our electric system," Randy Pryor, vice president of distribution operations for CenterPoint, said in a statement.

The company said it has implemented a pandemic preparedness plan so that energy and services can continue to be delivered. Pryor asked that customers "respect social distancing guidelines and not approach working employees and contractors."

For Southern’s electric companies, line crews and other workers will disperse amid the damaged areas that need repairing in order to have as few people in one area as possible, Connally said. While this means materials and supplies have to get distributed to more places, it may save time in the long run, he added.

"We may find some advantages in our restoration efforts," he said.

Southern and Entergy already have had some practice in restoring power while following COVID-related health and safety protocols. Severe storms and tornadoes hit parts of Southern’s electric company territory in Alabama, Georgia and Mississippi two weekends in a row in April (Energywire, April 14).

Some of the hardest-hit areas were in Entergy’s territory. The damage in Arkansas, according to the company, rivaled that of back-to-back ice storms in 2000. And Entergy has continued to deal with storm damage this spring.

Those restorations gave the company the opportunity to refine its strategy and further train employees on responding to a storm in conjunction with a pandemic, the company said in a statement. During five major weather events, Entergy said, crews were able to restore power to over 90% of more than 200,000 affected customers in five days.

"Despite the unprecedented challenge we may face navigating through a dual event, we are prepared," the company said in a statement.

For Southern, more than 1,000 out-of-state line workers helped restore electricity to more than 600,000 customers — and gave Southern’s electric companies a chance to practice new protocols to ensure that everyone’s health and safety were protected, said Connally.

"While these storms don’t measure up to hurricanes, we think they are very good test cases for us to prove out our COVID protocols," Connally said.

No one tested positive after restoring power during those spring storms, he said.

"Based on the severity of the event, customers should be prepared for outages and have resources to be without power for at least two weeks or possibly longer," CenterPoint’s Pryor said in a statement.

‘Now is the time to prepare’

In Houston, "planning for hurricane season and other potential disasters can be stressful, and because the 2020 hurricane season comes during the COVID-19 pandemic, it may be especially so," according to a city webpage about hurricanes.

Houston suggested that people give themselves more time than normal to prepare emergency food, water and medicine supplies, for example. After a hurricane, the city said, people should take actions such as washing their hands and wearing a face covering when cleaning up or returning home.

"Knowing that we have a very active storm season ahead of time, folks are trying to figure out what are going to be the gaps or what are the challenges that may arise … and getting ahead of those," Nickea Bradley, Houston’s new emergency management coordinator, said in an interview.

On Friday, the Harris County Flood Control District — a key agency during storms in the Houston region — issued a reminder to residents about preparations.

The district said a flood watch team would monitor rainfall trends and check gauges that track rainfall amounts and water levels in bayous and creeks. And it said construction contractors will work to make sure channels are clear and functioning.

"As a storm approaches, it is often too late to get ready," it said. "Now is the time to prepare."