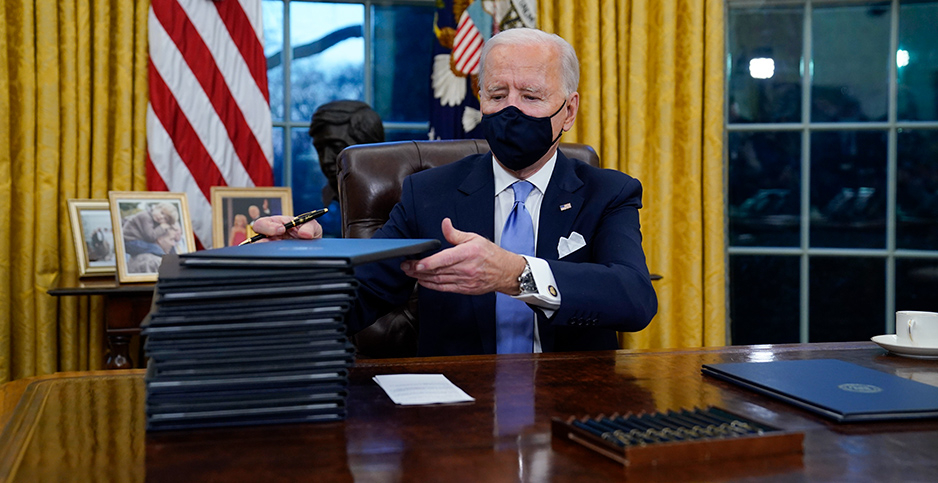 President Biden’s executive orders yesterday drew a swift rebuke from the GOP, as Republicans gear up a hyperbolic opposition campaign centered on Russia, China and the Green New Deal.

Biden signed off on orders shortly after he was sworn in yesterday to scrap permits for the Keystone XL pipeline, rejoin the Paris climate agreement, start the process toward pausing oil and gas leasing in the Arctic National Wildlife Refuge, and initiate a broad review of the Trump administration’s regulatory rollbacks.

Despite all the talk of unity and healing yesterday, the orders kicked off partisan opposition on Capitol Hill that offered a preview of the GOP’s strategy in slowing down Democratic climate legislation and the dismantling of President Trump’s deregulatory agenda.

"It’s only day one, and with the stroke of a pen, Biden has already taken steps to kill American energy projects," Sen. Steve Daines (R-Mont.) said in a statement yesterday.

And after years of attempting to put climate change science denial aside, congressional Republicans continued to go after the Paris Agreement, an issue on which they now find themselves in tension with the business community.

Daines said he would introduce a resolution calling on Biden to send Paris to the Senate for ratification, as well as a bill to continue construction on Keystone XL, with the support of several other Western Republicans.

While Republicans have long said Paris is a treaty requiring input from the Senate, the Obama administration signed it as a subsidiary agreement to the U.N. Framework Convention on Climate Change, which allowed it to skirt ratification.

The GOP dusted off a few other talking points about Paris yesterday as well, including that it advantages China, which initially only committed to reducing emissions after 2030, though the so-called nationally determined contributions that countries set under the agreement are nonbinding.

"If you listen closely, you can hear the communist government in China popping champagne," Rep. Dan Crenshaw (R-Texas), a member of the Energy and Commerce Committee, said in a statement.

"Rejoining Paris gives a free pass to polluters like China while punishing American businesses and hurting our energy independence," Crenshaw said. "We should continue to promote innovative solutions — like nuclear and carbon capture — to reduce emissions, not foolish virtue signals that may appease the radical left but do nothing to help the environment."

Capito and other Republicans were particularly incensed by the decision to nix Keystone XL, a symbol of the climate change and fossil fuels debates in the United States for more than a decade.

President Obama halted the project in 2015 amid criticism from environmental groups, but Trump continued the permitting process when he took office in 2017.

"My constituents and I have not forgotten the harm brought by this approach under the Obama administration," Capito said in a statement. "In these next four years, it is imperative that Congress aggressively exercises oversight and pushes back on the worst impulses of Washington bureaucrats when it comes to West Virginians’ way of life."

The cancellation of Keystone XL — which would deliver crude from Canada to the United States — was a gift to environmentalists, and Biden had opposed the pipeline throughout his campaign.

But it also could offer some political peril for Biden, who had courted unions on the campaign trail, with the Canadian government already signaling its opposition to ending the cross-border pipeline.

It could also imperil some moderate Democrats, such as Rep. Lizzie Fletcher (D-Texas), who did not answer directly yesterday when asked about the Keystone XL move. Others dismissed political concerns, given the symbolism of the pipeline.

"It is a little complicated because there are good labor jobs there, and I am impressed that they were trying to go build it with renewable energies," Rep. Don Beyer (D-Va.) told E&E News yesterday. "But it’s such a powerful symbol, moving away from fossil fuels, that I think it’s essential that he do it."

Rep. Cathy McMorris Rodgers of Washington, the incoming top Republican on the Energy and Commerce Committee, accused Biden of helping the United States’ adversaries and implementing aspects of the Green New Deal — a proposal Biden has explicitly said he doesn’t support.

"There are many opportunities for us to build a brighter future for all but a word of caution on the long list of policies President Biden rolled out today like rejoining the Paris Agreement, revoking the Keystone XL permit, and bringing back Green New Deal style mandates," she said.

The fossil fuel industry’s responses were more mixed. While they generally denounced Biden’s policies that will likely hurt their sectors, some groups sought to highlight their varying degrees of support for the Paris Agreement.

But Sommers also noted that API supports "the ambitions" of the Paris pact and promoted natural gas as a fuel that can help the United States reach its goals.

The U.S. Chamber of Commerce, which yesterday announced it would support "a market-based approach" to reduce greenhouse gas emissions, cheered Biden’s move to rejoin Paris.

"It is critical that the United States restore its leadership role in international efforts to address the climate challenge," Marty Durbin, president of the Chamber’s Global Energy Institute, said in a statement.

"The Chamber and the business community look forward to engaging with the Administration as it considers a revised nationally determined contribution (NDC) for the United States," he said.