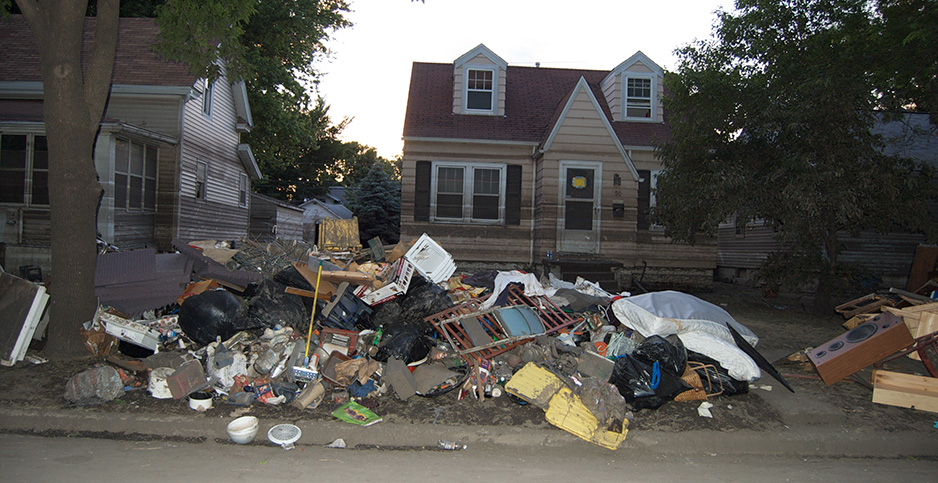 Flood lines are seen on homes in Iowa. The rural state could be hit by flooding and the coronavirus this spring. Christine/Flickr

Dozens of counties across the Midwest and Great Plains face a double threat from the coronavirus and major flooding in coming months, a looming crisis that could hamper efforts to protect communities from inundation and evacuate residents, according to an analysis released yesterday.

A report by the Union of Concerned Scientists draws attention to potential calamities in rural areas that are being overlooked as federal officials focus on cities and states with the highest infection rates of COVID-19.

The report focuses particularly on South Dakota, which currently has only 30 known cases of the virus — the fewest in the United States — but could see a large growth in infections with significant flood impacts.

"What we are trying to do here is illustrate the way in which, on top of all the uncertainty [surrounding COVID-19], we have this added layer of potentially protracted flooding," said author Juan Declet-Barreto, a climate scientist for UCS. "We wanted to emphasize the urgency for populations that are facing flood impacts and how they may be hard-pressed to deal with the epidemic."

Declet-Barreto and climate scientist Kristina Dahl wrote the analysis one week after NOAA warned of widespread flooding this spring, and as health experts try to track the soaring number of coronavirus infections.

The report combines NOAA’s projection of counties that face major or moderate spring flooding with research by Columbia University epidemiologists estimating county-level infections of COVID-19 through the next six months.

South Dakota and Iowa emerge as particularly vulnerable to the combined threat from major flooding and the coronavirus.

Linn County, Iowa, which includes the city of Cedar Rapids and the Cedar River, could experience major flooding this spring and nearly 2,700 COVID-19 infections, the research finds.

Altogether, 12,200 people living in counties likely to experience major flooding are expected to be infected by the virus, the report says. Major flooding involves "significant evacuations" of people due to extensive inundations of roads and structures, according to NOAA.

The outbreak comes in a period of extraordinarily wet conditions across the United States — particularly along the Mississippi and Missouri rivers and in the Southeast — that reflect the possible effects of climate change. In many states, soils are so saturated that they cannot absorb precipitation, forcing it to flow into swollen rivers and cause flooding.

Communities will face heightened challenges dealing with flooding because COVID-19 is expected to drain emergency resources and strain medical facilities.

"The sheer number of infected people who may need to evacuate their homes [because of flooding] could severely burden health care and emergency evacuation facilities," the report says.

The report also warns about the danger of evacuating people from flooded areas into emergency shelters, which often hold people in the type of cramped conditions that enable the coronavirus to spread.

"In counties where a large percent of the population is infected, a higher proportion of people evacuating during a flood could increase the spread of the virus or require isolation, a condition that could be difficult given the typical nature of emergency shelters," the report says.

NOAA has projected that 82 of the nation’s nearly 3,200 counties will experience major flooding this spring, and 707 counties will face moderate flooding. Major flooding is expected to occur in seven states: Illinois, Iowa, Minnesota, Missouri, North Dakota, South Dakota and Wisconsin.

Nearly 55,000 U.S. residents have been infected with COVID-19 as of yesterday, and more than 700 have died, according to the Centers for Disease Control and Prevention.