Virus brings blue skies to big cities. Will that last? 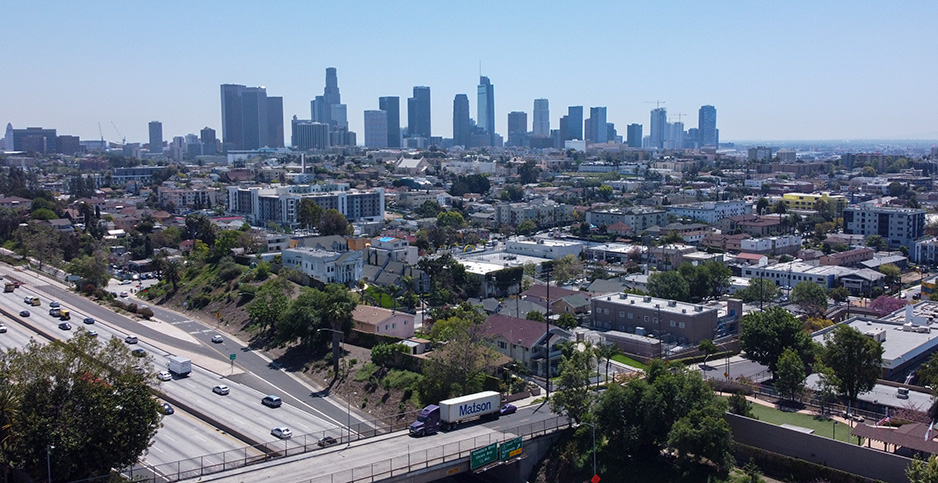 Light traffic across the U.S. has led to cleaner air. The Los Angeles skyline is pictured earlier this month. Image of Sport/Newscom

When Alexander Yellen leaves his Los Angeles home, he breathes the cleanest air in more than a decade.

Yellen, a 39-year-old cinematographer and director who has lived in LA for 17 years, said the change is palpable after California Gov. Gavin Newsom (D) issued a stay-at-home order to combat the coronavirus pandemic.

"There’s a quality to LA’s air that residents are used to after the rain, where it’s clear and it smells and tastes fresh. And we’re having that kind of experience even on days when it hasn’t rained," he said in a recent phone interview.

Yellen, who drives a hybrid electric vehicle, hopes the clearer skies spur people to drive less once the pandemic has ebbed. Cars are a leading source of air pollution in California and across the country.

"I hope it does change. I really, sincerely do," he said.

Cities across America are breathing easier with residents locked at home to slow the spread of COVID-19. In New York City, carbon dioxide and methane emissions fell 10% in March, according to researchers at Columbia University.

In Boston, CO2 emissions fell 15% after Gov. Charlie Baker (R) issued a stay-at-home order on March 23, according to data collected by scientists at Boston University.

And in Los Angeles, researchers at UCLA found a 20% improvement in overall air quality since Newsom issued his stay-at-home order on March 19, although they cautioned that the trend also stemmed from weather patterns. The area recorded 21 consecutive days of good air quality in March, the longest stretch since 1980, the Los Angeles Times reported.

But it remains to be seen whether the temporary improvement in air quality will lead to lasting changes, according to interviews with six experts who study air pollution and climate change.

Some were hopeful that the pandemic could spur a decline in driving, a surge in electric vehicle adoption or an explosion of bicycling, walking or telecommuting. At the same time, they fretted whether the crisis could just as easily result in a migration to the suburbs. That could fuel more driving.

"I suspect that if you’re living in an urban Los Angeles and you’re all of a sudden seeing clear skies or you’re seeing cityscapes that you didn’t see before, I think that certainly captures people’s attention and reminds them of how clean the air has gotten," said Amanda Carrico, a professor at the University of Colorado, Boulder, who specializes in environmental psychology. "But I tend to be a little skeptical that this will lead to behavioral change or policy outcomes."

Carrico noted that most American cities and suburbs are designed for driving. Many Americans rely on a car to reach jobs, grocery stores and child care. We live in a society that prioritizes automobiles.

Some residents might see the blue skies as a symbol of economic suffering during the pandemic, said Anu Ramaswami, a professor of civil and environmental engineering who studies climate policy at Princeton University. She recalled conversations with Pittsburgh steelworkers who fondly remembered the city’s polluted skies as a symbol of better times.

"As environmentalists, we want to be aware of this. We might see it as an opportunity, but many associate the pollution with work," Ramaswami said.

Greens, she added, would do well to emphasize the economic benefits of the clean energy technologies available today. "A switch will turn on. People are going to say we can do this," she said.

The improvement in air quality is being driven by parked cars. Traffic levels in LA are down 45%, according to INRIX, a firm that analyzes traffic data. In New York and Boston, traffic has fallen by 60% and 48%, respectively. The empty streets have prompted steep declines in traditional air pollutants that cause smog.

Tailpipes account for roughly a third of carbon monoxide and nitrogen oxide emissions nationally, according to EPA. They are a relatively smaller source of particulate matter emissions, representing about 6% of the national total.

Some of the improvement in LA’s air can be attributed to stormy spring weather, which helped clear smog from the skies, said Yifang Zhu, a professor of environmental health sciences at UCLA’s Fielding School of Public Health.

Zhu, who was part of a team of researchers that found a 20% improvement in Southern California’s air quality since the governor’s stay-at-home order, stressed that it shouldn’t take a global pandemic to achieve such progress.

"I don’t want people to see this as a silver lining amid the pandemic. Clean air is everybody’s right," she said. "We don’t need a pandemic for people to breathe clean air. This should be the air we breathe every day."

Visible improvements in air quality offer an opportunity for climate action, said Ann Carlson, a law professor at UCLA who specializes in the Clean Air Act. Climate policy is complicated by the fact that greenhouse gases are invisible, meaning efforts to reduce them often go undetected by the public. But efforts to reduce traditional — and visible — air pollutants also result in lower greenhouse gases, she said.

"Nationally, the story is more complicated politically, but I do think that stimulus money for green infrastructure seems more possible now than before the pandemic," she said. "Beautiful skies help with the politics."

Transportation is the leading source of carbon dioxide in the United States, accounting for 36% of the country’s emissions. Passenger vehicles and light-duty trucks are responsible for 58% of the sector’s emissions.

But he stressed that individual action is not a substitute for systemic changes. Even if more consumers buy EVs, he said, the vehicles will not be widely adopted unless automakers and dealers do a better job of promoting them.

Dave Cooke, a senior vehicles analyst at the Union of Concerned Scientists, agreed with that assessment. He noted that nearly three-quarters of U.S. auto dealers aren’t offering a single EV model, according to a recent analysis by the Sierra Club (Greenwire, Nov. 13, 2019).

"Regardless of whether or not the pandemic changes individual behavior, I think the problem with climate and transportation isn’t individuals; it’s systemic and structural," he said.

Still, Cooke said one individual action — teleworking — has the potential to take a big bite out of transportation emissions. He noted that approximately 86% of Americans drive to work, citing the National Household Travel Survey.

Not everyone is able to telework. But Cooke estimated that if just one-quarter of Americans started teleworking one day per week after the pandemic, total vehicle miles traveled would fall by 1%. That’s "nothing to sneeze at," he said, when Americans logged more than 3.2 trillion miles in 2018.

Regardless of how the pandemic influences behavior and climate policy, it will be a historic moment that environmentalists will remember for decades, according to Carrico, the professor at CU Boulder.

"I’m really curious to know in 10 years [what] stories we will tell about this time, especially environmentally," she said. "There’s these kind of iconic moments like the burning of the Cuyahoga [River] that we tell a lot when we talk about environmental progress and policy. And I suspect this is gonna be one of those stories."